400 years ago today, Tomás Luis de Victoria, one of the very finest Renaissance composers, died. To commemorate his passing, a little over three weeks ago the Tallis Scholars directed by Peter Phillips gave a late-night Prom concert dedicated to Victoria’s music.

The concert begins with one of the Motecta Festorum, Victoria’s first volume of motets, published in 1572 and marking a significant point in his career. The stirring text of Dum complerentur recalls the scene –but not, despite what the programme note says, the actual act – of the descending upon the Apostles of the Holy Spirit, and the references to sound and noise clearly got Victoria rather excited (the Tallis Scholars take it at a helpfully brisk tempo). The music can’t sit still, although the opening section, setting the scene, is downplayed, the first ‘Alleluia’ barely allowed to grow before it’s quickly interrupted (‘Et subito’). But now everything heats up; at the reference to a “sound from heaven”, Victoria lingers on the word ‘sonus’, the repeating downward lines hinting at the forthcoming climax. The second ‘Alleluia’ is allowed to develop more, but it’s not until after the next phrase, likening the sound to a “hurricane in its fury”, that Victoria unleashes a lengthy ‘Alleluia’, laden with overlapping descending lines, akin to a peal of church bells. The text then goes round in a little tautological circle, effectively setting the scene again, but affording Victoria the opportunity to explore ‘sonus’ again, this time with more extended melismas, in some of the motet’s most breathtaking material. It closes with a repeat of much of the earlier music, allowing the listener to revel again in the sheer exhilaration of that climactic ‘Alleluia’. 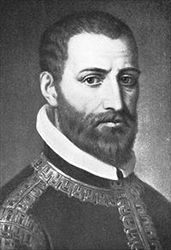 That’s as cheerful as the concert’s going to get; it’s followed by the Lamentations for Good Friday, which form part of arguably the most important collection of music Victoria ever composed, the Holy Week compendium Officium Hebdomadæ Sanctæ. The text is a selection from the Bible’s most desolate book, the Lamentations of Jeremiah—and incidentally, for those baffled by the presence of Hebrew letters in the text—heth, lamed, mem, aleph—these are part of the highly intricate structure of the original poetic text, which was arranged in blocks of 22 verses, each beginning with a different letter of the Hebrew alphabet (which has 22 letters). It’s interesting to note Victoria’s different approach to these letters, setting them in a relatively plain, matter-of-fact fashion. As for the rest, the Lamentations fall into three sections, each containing a short paragraph describing an aspect of the despair and sense of isolation felt by the author. In contrast to Dum complerentur, Victoria keeps the choir much more as a homogenous group, heightening the sense of this being a communal lament; and despite the subject matter, it’s music without bluster or outrage, kept almost surprisingly restrained—again, the Tallis Scholars judge this perfectly, keeping a lid on the dynamics throughout. The occasional, brief chromatic inflections are poignant, heard as early as ‘luxitque antemurale’, and even more powerfully at ‘vel cui assimilabo te?’ (“to what can i liken you?”). Almost throughout the second Lamentation Victoria keeps the basses quiet, which seems appropriate considering the specific female references at that part of the text. Each Lamentation ends with a common refrain, urging Jerusalem to return to God; Victoria saves some of his most telling material for these passages, the pleas equally as distressed as the laments. The closing refrain of the piece is the most striking, at first alternating between upper and lower voices, before combining them in a powerful final petition that superbly demonstrates one of Victoria’s most astonishing abilities: to make music that’s simultaneously immoveable, granite-like, and yet also lighter than air.

The remainder of the concert consists of one of Victoria’s most well-known and impressive works, the Officium defunctorum or Office for the Dead, which beside other things, incorporates the elements familiar to many through more recent settings of the Requiem. The style of writing is something of an amalgam of the motet and the Lamentations, predominately homophonic but allowing for extensive counterpoint when the text demands it. Victoria also uses the voices in a more extreme way than heard earlier, exploiting a wider vocal range, at times plummeting the parts into the very depths. He waits until partway through the Introitus, about five minutes in, to start expanding the mood (‘Te decet hymnus’), emboldening it through one of the text’s few celebratory moments. This isn’t an isolated example, but for the most part, Victoria keeps the music steadfastly po-faced, prepared to explore a rich harmonic palette, but in an environment that’s unequivocal in its overarching solemnity. The phrase ‘dona eis’ (“grant to them”), recurring in different sections beseeching rest for the departed, is always given lush treatment; in the Graduale (‘In memoria æterna’), Victoria continues this richness throughout, likewise in the latter part of the Agnus Dei. But some of the most captivating passages are the ones that exercise greatest restraint, such as the slow, stately Sanctus, and most particularly the two settings of the Kyrie; while in the first, Victoria extensively draws out each phrase, making the music all the more imploring, in the second, drawing the work to a close, the lines move with so little momentum that they almost approach a grief-racked stasis. Those more accustomed to a diet of the requiems of Mozart and Verdi may miss the fireworks, but the passion and intensity of Victoria’s setting, especially at moments such as these, is unnervingly overt.

For an encore, the Tallis Scholars performs another setting of ‘Versa est in luctum cithara mea’ (heard earlier as part of the Officium defunctorum), by Victoria’s esteemed contemporary Alonso Lobo. Lobo’s is, if anything, more solemn still than Victoria’s, and his choice of harmonies ever so slightly more piquant, but there’s ultimately little to separate it stylistically from its counterpart, which goes some way to justify why Victoria himself regarded Lobo so highly. The ending is interesting, the final cadence almost seeming to arrive too quickly, the preceding phrases practically tumbling through their notes to get there in time.

One simply can’t underestimate the consummate skill required to perform this music; the fact that, as they always do, the Tallis Scholars enable these pieces to arise seemingly effortlessly from the page proves that they continue to be one of the world’s very finest choirs.

Excellent stuff! Thank you very much.