If composers have generally lost a lot of the romanticised mystique and puffery that used to surround them (no bad thing), there remains one area where compositional intent is still likely to raise eyebrows and/or hackles, and confine the composer to a box labelled ‘weirdo’: non-standard tunings. Due to the mental and physical reconfigurations it demands, the act of turning away from the haven of semitones and octaves in favour of alternate divisions of pitch still has a tendency to piss off performers and audiences alike, and despite the ripostes that equally-tempered semitones are only one way of subdividing the infinite gradations of the pitch domain, and are in any case largely irrelevant in electronic music, composers who indulge in microtonal machinations within the realm of instrumental music often continue to be emblazoned with a badge of the bizarre. Even such well-known and -regarded figures as Charles Ives and Harry Partch continue to sport this badge (in Partch’s case, being practically defined by it); time, it seems, can only do so much. 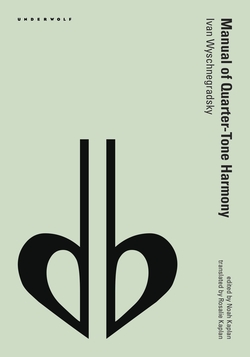 All of which makes the publication of Russian composer Ivan Wyschnegradsky‘s Manual of Quarter-Tone Harmony a welcome contribution to this area. In the same way as Partch, Wyschnegradsky’s name is synonymous with microtonality, and the few albums of his work that have been released all feature examples of his quartertone piano music. While i’m no Wyschnegradsky expert, this association is perhaps not an unfair one, as it’s abundantly clear from his Manual just how seriously he regarded quartertones and how earnest he was in his efforts to integrate them into conventional (i.e. semitonal) music theory. Simply but elegantly published by Underwolf Editions, this is the first English translation of the book, a painstaking process undertaken by Rosalie and Noah Kaplan (translator and editor respectively), incorporating later edits made by Wyschnegradsky in his own annotated copy of the book, which was originally published in 1932. At just 28 pages its length belies how significant the book is; it deserves to sit alongside any of the great 20th century compositional tracts, manuals and manifestos.

Apropos: at first glance it’s easy to make comparisons with Olivier Messiaen’s Technique de mon langage musical, though there are two big distinctions to be made. First, Messiaen’s work is essentially a guide on how to compose like Messiaen, whereas Wyschnegradsky is altogether more objective and aesthetically neutral (to this end, Messiaen uses illustrations taken from his own compositions, whereas Wyschnegradsky uses simple, stylistically generic examples). Second, where Messiaen’s Technique is somewhat removed from conventional music theory – to an extent, it seeks to re-conceive music theory from first principles, particularly with regard to the harmonic series – Wyschnegradsky is concerned with presenting quartertone harmony as an organic, evolutionary extension of established Western harmonic and contrapuntal practice. This latter point is extremely important: the Manual of Quarter-Tone Harmony is designed to be read in relation to an existing and pretty rigorous understanding of music theory: if this is lacking then the majority of the book is unlikely to make a great deal of sense. Beyond this, because of the nature of the subject matter – making it impossible to take to the piano and play through the examples – one would potentially either have to take all of Wyschnegradsky’s recommendations on trust or try them out on a computer. Underwolf Editions have marvellously anticipated this, and all of the examples in the book are supplemented with online audio clips in which they are demonstrated.

It’s a lot to take in; i’m not sure i’ve ever spent so long poring over just 28 pages. Much of the introductory notation and terminology will be familiar to anyone accustomed to contemporary music notation – but the names of the quartertonal intervals i hadn’t encountered before. However, in most respects they make intuitive sense, particularly the intervals that fall in between their minor and major equivalents, which Wyschnegradsky calls ‘neutral’. These are wonderfully effective at blurring tonal distinctions, initially causing the brain – my brain, at least – to try to resolve them one way or the other. (An interesting side-effect of the book: it vividly illustrates how ingrained, second nature and, if one’s not careful, incontrovertible Western harmonic thinking can become.) Some of the other interval terms feel a little more cumbersome by comparison, though again are as intuitive and descriptive as possible. For example, ‘second-third’, ‘third-fourth’, etc. are used for the intervals falling between them (e.g. C to D quarter-sharp is a ‘second-third’, as this interval is greater than a major second but smaller than a minor third), whereas ‘major third quarter high’, although wordy, is clear about what it indicates. It’s apparent, both here in the opening chapter and throughout the book as a whole, that all this is the result of a considerable struggle, Wyschnegradsky grappling and trying to work with a system designed purely for semitonal relationships; that his book is as relatively straightforward as it is, is therefore no small achievement. 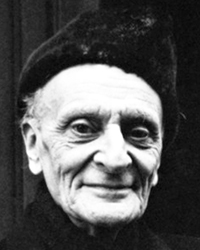 In Parts I and II, which progress to examine the harmony in much more depth, including key relationships, chord progressions, modulation and ‘artificial’ (i.e. not octave-based) scales, the combination of Wyschnegradsky’s slow, methodical approach and his pragmatic attitude prevents the discussion from ever feeling impenetrable or impractical. My heart initially sank during the introduction to new key signatures – which look as completely unhelpful as you’d imagine they would – but they are presented purely for illustrative purposes: Wyschnegradsky immediately clarifies that, “to not complicate the notation we will abstain from using the key signatures for the new keys”. Phew. The struggle i spoke of also rears its head in the way these new keys are handled, particularly from the perspective of modulation. As he points out, quartertonal keys can’t be regarded as, in the normal sense, harmonically ‘distant’ from semitonal keys as, technically speaking, they’re completely unrelated to them. Wyschnegradsky therefore suggests that “the progression must move suddenly”, though ideally moving by quartertones in the voice leading rather than larger intervals “to soften the passage”. The implication is that semitonal and quartertonal keys exist in parallel universes – or are like different gears in a gearbox – and modulation between them therefore involves a sudden harmonic ‘clunk’ as the music switches from one to the other. Yet Wyschnegradsky clearly wants to regard them as being part of the same universe, subsequently recommending that the shift be anticipated through ornaments, passing notes and suspensions involving quartertonal pitches. Here too, the tension in the attempt to reconcile quartertonal harmony is palpable.

The question i kept asking myself while reading the Manual of Quarter-Tone Harmony was this: is it a historical artefact of anecdotal interest or a manual with practical, ongoing use? Considering how relatively unknown Ivan Wyschnegradsky remains it would perhaps be nice to think of it as being useful for contemporary composers. The answer to this of course depends in part on the extent to which harmony and/or ‘tonality’ – in a formalised sense – are relevant to a composer. Many composers (particularly, in my experience, younger composers) put less emphasis on harmony, preferring to regard it as the background, macro by-product of foreground decisions or processes rather than something preordained that colours and determines surface-level details. But the usefulness of the book depends just as much on your ears, and how convinced you are by the sonic reality of Wyschnegradsky’s recommendations. For the most part, i found his remarks to be reliable; when examining ornaments he suggests that “[t]he quarter tone is always good as a lower ornament. As a raised ornament, in contrast, it is not…”, which at first seems an arbitrary, subjective comment yet is entirely borne out when aurally comparing them. In terms of modulation, personally i felt less convinced. It’s genuinely uncanny and ear-boggling to hear four-part harmony progress from F major through quartertonally-altered augmented sixth chords to arrive at B quarter-flat minor, yet while i loved the sonic effect, the case for describing this as a ‘modulation’ is a lot harder to justify. i accept a part of the problem is due to one’s ear being relatively unaccustomed to this kind of harmonic jiggery-pokery, but the tiny intervals being used may in practice be actively working against making these kinds of harmonic progressions sound plausible. That being said, the latter part of the book, where Wyschnegradsky discusses new types of scales not bound by the octave, and the free use of quartertones within less conventionally-formalised atonal harmony, is likely to be interesting and useful to any contemporary composer wanting to harness quartertonality.

It’s important to stress that the book’s didactic attitude could not be more balanced. On the one hand, its subject matter is innovative and enormously challenging, adding a plethora of new terms and techniques to the musical lexicon. Yet despite the extent to which Wyschnegradsky has researched and developed his subject, and his enthusiasm in sharing it with others (in keeping with the sense of struggle i mentioned, there’s an implicit air of triumph too), he is never remotely dogmatic about it. From his perspective, this is simply one way – rather than the best or only way – of integrating quartertones into the existing harmonic landscape. This is stated very clearly in the closing paragraph of the Preface, and reiterated towards the close of the final chapter:

All the rules in Part One dealing with quarter tones in classical harmony should only be accepted in a historical context. That is to say, they should be considered as a provisional exercise in order to move gradually towards the new material. Like the rules of semitone music, the new rules are not intrinsically absolute. They are conventions that we are free to accept, or replace with other conventions, or even reject completely. [Preface]

The composer has complete sovereignty and freedom with regard to their musical material, which demands a mature sense for creating an internal order within apparent disorder. This is why any rule, any law is impossible in this domain… [Chapter 2]

(If only open-minded, qualifying remarks like these might accompany the teaching of conventional music theory!) The boldness with which Wyschnegradsky declares that any or all of his guidelines can be rejected, composers instead formulating their own approaches, means that his book never feels remotely like a manifesto – indeed, at no point does Wyschnegradsky even advocate that composers ought to be using quartertones. What emerges loudest and clearest, cutting through all its theoretical discourse, is a powerful conjunction of unbridled enthusiasm and systematic rigour, which together makes the Manual of Quarter-Tone Harmony a rallying cry to the importance and potential of quartertones. Composers who cleave for all they’re worth to conventional semitones are unlikely to be wrenched from their safe scepticism by anything in this book, but anyone wanting to explore beyond the cosy confines of the semitone and the octave in instrumental music would do well to use Ivan Wyschnegradsky’s suggestions as the starting point for their own experiments.

The Manual of Quarter-Tone Harmony costs $24 and is available directly from Underwolf Editions.