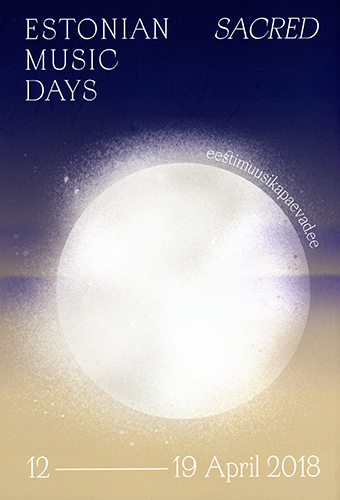 One of the defining features of the Estonian Music Days is its openness to including decidedly unconventional concert situations. Last year’s Obscure Avenues, a two-hour experience during which we were blindfolded and led around to various performance spaces, remains among the most radical and memorable musical encounters i’ve ever experienced, and while the 2018 festival perhaps wisely didn’t attempt to top that, it had its fare share of surprises.

The opening night of the festival saw Flame Sounds, a short open-air performance from composer Liisa Hirsch with Australian fire artist Chris Blaze McCarthy. Surrounded by four microphones, Blaze acrobatically wielded a succession of implements – a mixture of bars and chains – that almost looked as if they’d been borrowed from Tallinn’s museum of mediaeval torture instruments, each one burning in a unique way. 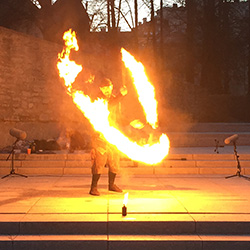 These were the basis for Blaze’s physical choreography, with Hirsch in turn capturing and processing the sounds into a network of billowing noise formations, projected out via four speakers surrounding where we were standing. Considering this was part of a music festival, it was a shame that the emphasis was almost entirely on Blaze’s actions rather than on Hirsch’s sonic results – Blaze abruptly moved on throughout, despite Hirsch’s music continuing – making for a frustrating, though visually exciting, performance. But what we experienced nonetheless made an interesting connection with the festival theme of ‘sacred’, elusive sounds emerging from the merest contact of fire and air.

A more convoluted engagement with this theme came during a mid-week performance in Estonia’s oldest cinema, the architecturally-splendid, Soviet-era Kino Sõprus. Titled Nature vs. Technology, the concert explored various audiovisual works involving live violin or viola (performed by Barbara Lüneburg) that, in some cases, seemed to do little beyond demonstrating the kind of fundamental disjunct implied by that title. Edgar Pacheca Ruiz‘s Regresión was a case in point, in which the violin and fixed media elements seemed entirely disconnected from each other, though not from the film narrative they both accompanied. Tauno Makke‘s Dynamics of Inner Peace was better; admittedly the viola felt superfluous (not that it did very much), but the balletic relationship between the video and electronics was most effective. 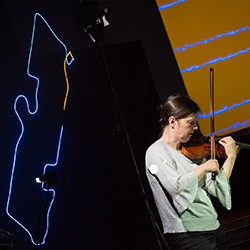 Most striking in this concert was Marko Ciciliani‘s ambitious 2015 piece for violin, live electronics, live video and laser – yes, laser – Steina. It caused me to reflect on the theme of ‘sacred’ in two ways. First, relatively superficial, was in response to watching the movements of the hovering laser, which almost carried the same kind of numinous presence as if a ghostly spirit had materialised in the room. More deeply, Ciciliani’s work presents four stimuli, two aural (violin, live electronics) and two visual (video, laser) where the relationships between those stimuli are often hard to discern. This is deliberate: Ciciliani describes them as “disparate” in his programme note, remarking how he was “not looking for a homogenous fusion of individual elements”. When one considers certain aspects commonly associated with ‘sacred’ or ‘holy’ experiences, one often collides against the notion of ‘connection’: what, for example, constitutes “divine intervention”? Put simply, and more generally, what is defined as a ’cause’ and ‘effect’ in such contexts is not merely debatable but intangible and inscrutable (and, indeed, imaginary?), and the same kind of precarious hyper-subjective search for connectivity is at the heart of Steina. An engrossing audiovisual encounter that seemed simultaneously solemn and playful, it kept us constantly on our toes as to the (in)congruity and (in)compatibility of its elements. Was that flicker across the laser caused by the violin’s last note? Is the violin responding to that smear in the video or is it responsible for it? Or, indeed, are they entirely oblivious to each other? Are the electronics duetting with the violin, and/or the video, and/or the electronics – or, again, are they playing out with supreme indifference? Indeed, how does each element even relate to itself as it continues? i can only imagine that all these questions had at least as many answers as there were members of the audience. Talking with Ciciliani after the concert, it’s clear that various things went wrong in this performance, but while it would be fascinating to experience it again, free from technical gremlins, the work nonetheless managed to provoke fascinating questions about humanity’s need to find causes and connections where, in fact, there may well be none at all. 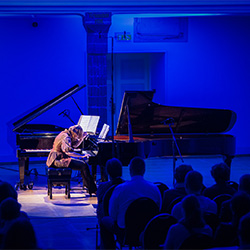 Something i’ve often argued for in contemporary music concerts is the opportunity to hear a work performed more than once, such as in each half of a concert. It’s rare to find concerts or festivals open-minded enough to do this (the usual preference being to cram in as many different things as possible), but at this year’s EMD this was made possible by featuring one of the concerts – an electroacoustic piano recital given by Kadri-Ann Sumera – twice, performed at each end of the festival. Titled Sound = Colour, each version of the concert – the first in Tallinn, the second in Tartu – was suffused in shifting coloured lights, and featured three new works. The most demonstrative of these was Kristjan Kõrver‘s Toc III, a free-wheeling, unpredictable piano work but with a definite sense of an argument being thoroughly (if not quite methodically) worked through. This sense of being so focused on the task at hand was somewhat distancing (Sumera looked as if she had no idea there was an audience present) yet the music displayed such an enormous range – dynamic, behavioural, emotional – that it was never less than compelling, its climactic end coming like an almighty full stop: DONE.

Gentler and slippier was Liisa Hirsch‘s Terrains, a work featuring two pianos tuned such that the space of a major third contains twelve microtones. Performed throughout with one hand on each piano, Sumera slowly tickled her way down the keyboards, creating very nice harmonic ambiguities, particularly unisons and fourths but above all thirds, which were always at a liminal point of stability. Hirsch was the only composer of the three to have considered the instrument’s capabilities from first principles, and while hearing the piece a second time seemed to introduce longeurs into its tight inner drama not present in the first performance, Terrains proved to be an engrossing and supremely pianistic experience; Kadri-Ann Sumera’s tenacity in this piece, maintaining soft tremolandi for nearly a quarter of an hour, was incredible. The third new work performed in these concerts was Märt-Matis Lill‘s Nocturnal Landscapes for piano and electronics. In this case, it was actually possible to hear the piece three times, due to its inclusion in another concert i’ll discuss in a moment. Here the value of repeat listenings was enormously helpful, though not, ultimately, to the work’s benefit. Book-ended by rather beautiful, fascinating sections involving Sumera stroking the keys and skimming them with the tips of her fingernails, expanded by the live electronics, the middle of the work consists of a lengthy sequence of deep clusters and portentous chords that, on first listening, seemed only somewhat dull and ineffectual, but on subsequent occasions proved to be a major handicap to the piece, a boring and overlong section that seems completely unsure of what it’s doing or why. 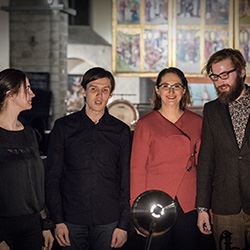 The third opportunity to hear this piece came in one of the highlight concerts of this year’s EMD, a late evening event in the Niguliste Church the title of which perfectly described what the building would become: Chamber of Sound. It brought back Kadri-Ann Sumera together Eva-Maria Sumera (violin), Vambola Krigul (percussion) and Tammo Sumera (electronics) for a concert of electroacoustic works, almost all of them premières. In Lepo Sumera‘s Play for Two, composed in 1992, the electronics served to reverberate statements being made between violin and percussion. Though clearly argumentative, their relationship is presented formally, without any interaction at first, though gradually introducing a sense that the apparent separation of the instruments – made real in this performance by having them physically located at opposite ends of the nave – was being reduced as the material of each began to influence and infiltrate the other. With regard to the festival theme, the work charts a journey from complete disunity and disregard to that most sacred of all things, reconciliation. Margo Kõlar‘s new work The Belfry uses the sound of tolling bells from various Estonian churches, but in defiance of one’s expectations, courageously opts not to apply any obvious processing to those sounds. The result was a lovely unity of difference, and while the distribution of the sounds – in terms of both frequency and position – had a stochastic quality, at the same time they also gave the impression of the various churches conducting a long-distance discussion. As such, one could appreciate it on its own terms or infer within it a subtle adjuration to (possibly ecumenical) dialogue. 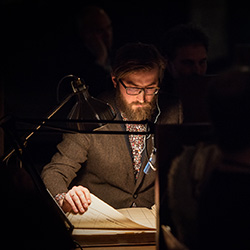 Tammo Sumera moved away from his laptop for Malle Maltis‘ live electronic work Puud, kes oskasid kirjutada (The Trees Who Knew How to Write). Seated at a table in the centre of the nave, Sumera proceeded to pore over, leaf through and eventually write upon and even tear pages from an enormous ledger, the sounds feeding into a larger soundscape of creaks and aching squeals and groans (clearly derived from tree sounds) and gong-like pitch resonances. Embellished further later on with soft whisperings, it was as beautiful to experience as it was inscrutable, Sumera appearing to ruminate on the history of the paper caressed between his fingers, the church space becoming an aural projection of his imagination. This was wonderful enough, but the closing work in the concert, Liina Sumera‘s Conatus for 16 speakers, was even more so. Its episodes began gentle and meditative, sometimes timbrally-defined but more often combining elements as if they had been liquidised. Though there were no sudden jolts or surprises in this, it was entirely unpredictable and, as a consequence, none of us could have seen coming the huge climactic sequence that emerged, electrifying the entire church in a gorgeous rush that seemed to carry us up into a place of infinite ecstatic bliss. In the most unconventional and unexpected of ways, we suddenly found ourselves transported into heaven.

[…] the four years i’ve been attending the festival: Conatus by Liina Sumera. It’s a work i raved about it at its première last year, and while i haven’t yet heard all of the works shortlisted for this year’s award, it […]