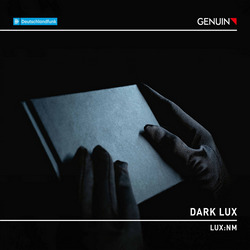 Not so long ago i revisited an old favourite of mine, William Walton’s Façade, a work that takes sublimity and absurdity and wonderfully manages to make them gel – or, at least, engage in a weirdly (un)comfortable coexistence. Both the character and the attitude of Façade have been brought instantly and repeatedly to mind while i’ve been spending time with Dark Lux, a new album from the Berlin-based ensemble LUX:NM. Walton subtitled his work “an entertainment”, and while that’s not a description i’d expect (or even want) to see applied to a lot of contemporary music, i can hardly think of a more apt phrase to describe the experience of Dark Lux.

A self-described “journey into the depths of the human soul” in order to “search for traces of evil, of nastiness and unpleasantness in everyday life”, the album primarily focuses on instrumental works by Gordon Kampe, alongside sound art by Jan Brauer and arrangements of music by Rameau and Gesualdo. Yet to think of Dark Lux in those terms – as a compilation of assorted, discrete pieces, and / or as an album made up 22 separate tracks – would be to miss the point of it as a single, large-scale experience encompassing nightmare, fever dream and hallucination. Heard in this larger context, its wild episodic shifts, with concomitant lurches of style, become interconnected scenes of a demented but cohesive drama, one that entirely lives up to the title, simultaneously dark and light.

There’s even a kind of existential challenge early on, during Kampe’s Flüsterkantate, when the distorted sounds of a manipulated turntable suggests that the entire performance isn’t real but merely an artefact being wielded by an unseen force. Having challenged reality itself, the work passes through a forest of whispers and the semblance of ambient sound into the innards of a hyper-plunky-clunky machine (Das ABC der Straftaten), where a litany of offences is recited, and then on to something akin to a runaway train (Tarantella (aus: Fat-Finger-Error)), one of several occasions during Dark Lux when the music comes to resemble the score for an early silent movie, reinforcing the impression of an invisible, inscrutable inner narrative.

Moments of lyricism pop up along the way, though their softness is either challenged with sharp timbres and grotesque harmonies, through being channelled into a kind of black cabaret, or by manifesting as oblique folk songs and lullabies, rendered unsettling, even sinister, in this environment, as if their accompaniments were poised to swamp and destroy them. Likewise, the presence of the early music, courtesy of Rameau and Gesualdo, appear as echoes of something familiar or recognisable in the midst of an altogether more unpredictable torrent of unstoppable madness, but these landmarks also find themselves distorted and undermined in Kampe’s askew arrangements.

There’s beauty to be found in all this, and challenge too, but the abiding quality of Dark Lux is a malevolent form of mischief. In every sense of the word, this is ‘diabolical’ music, finding the urge to twist and contort, to jump about chaotically and fixate on both harsh brightness and deep shadow completely irresistible. To this end, as i said at the start, the result is enormously entertaining, a whirlwind of breathless, barbed high jinks that, after they’ve finally subsided, stay with you, playing on the mind and causing vestigial tingles to run down the spine.

Released last month by Genuin, Dark Lux is available on CD and download.

You’re spot on with this one, Simon. Fun – in a good way. A touch of the Kagels about it perhaps too, but lighter.