When i was 16, i bought my first CD player. At the time – and i’m conscious how old i feel saying this – it was still a real novelty for anyone my age to possess their own CD player, and it was one of the (mercifully) few times when i was the centre of attention, everyone wanting to experience the clarity of digital music. At the same time, i bought 4 CDs, the start of a collection that i now have neither the time nor the inclination to count. Among those four was Transvision Vamp‘s second album Velveteen, that had been recently released (also among the four was Martika’s self-titled debut album, but we all make mistakes). My interest in Transvision Vamp began when their first single, “I Want Your Love” was released the previous year. Both the song, and its accompanying video, are breathtaking; it’s one of those amazing moments when you hear a song by an artist you’ve never encountered before, and the experience is totally enthralling. i can’t recall another female vocalist who was quite like Wendy James at that time: she snarled and screeched and screamed, she was the archetypal rock-chick, full of froth and feist, and she oozed sexuality (i admit i had many posters of her on my wall). One of the reasons why their sound was so refreshing, i think, is because it was at a time when the acid-house scene was reaching its peak, and the so-called “Madchester” bands were beginning to become really popular, a style of music that, with a few exceptions, i found bland, generic and – worst of all – eager to please. So Transvision Vamp’s combination of rock with (rather mild) punk was an exciting break from the norm. 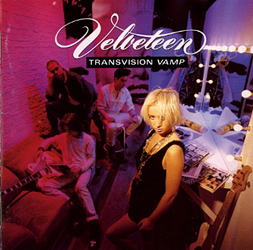 While their first album, Pop Art, was only quite good, Velveteen is an album that deserves to be long-remembered. The songs retain all the bratty brashness (the title of the opening track, “Baby I Don’t Care” says it all), but with a maturity and an openness to taking risks that are impressive. The first half begins with rollocking rock anthems, Wendy James’ voice slip-sliding around all the sharp guitar riffs like melted ice-cream. “Baby I Don’t Care” is just a touch too mellow to live up to its apathetic title, but things really get going with “The Only One”, a lovesick paean to someone who’s caused happiness and misery in fairly equal measure (a recurring theme in their songs). “Landslide of Love” is the first surprise, conjuring up the sound of the 1950s without any hint of pastiche, but with a rich harmonic palette and the addition of strings, a foretaste of things to come. “Falling For A Goldmine” is more of a ballad, with some nice ideas, although the overall effect is rather bland, and Wendy’s voice sounds awkward in the chorus. The next track, “Down On You”, is the Vamp at their vitriolic best: “Like all the dead-end pricks/ You get your critical kicks/ With anything that sticks/ But you just leave me sick/ And every empty can I see/ In the gutter of a dead-end street/ And everything that just aint true/ Reminds me of you/ I’m down on you…” – ouch. Sentiments like these, in the hands of some God-forsaken (and God-awful) emo band would sound trite and teenage, but here they speak with an adult bitterness and barely-suppressed rage, the music equally single-minded. “Song To The Stars” is another surprise, a 2-minute miniature featuring just voice and guitar (plus some distant electronics); it’s a soft, almost nursery-rhyme ending to the first half of the album. 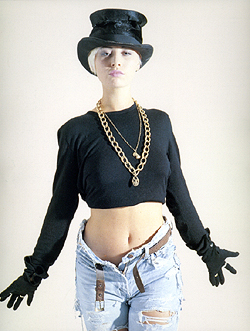 “Kiss Their Sons” gets the second half off to a solid start, the guitars sounding even more razor-like than before; the words aren’t listed in the booklet, but the phrases that emerge through the dense mix suggest another caustic outpouring. “Born To Be Sold” is a slightly corny protest against the commercial aspects of pop music, charting a progression from Elvis Presley (with a return of the 50s sound of earlier) to the present day (well, 1989), although it’s such a relaxed protest that it fails to be convincing. All is forgiven, however, with “Pay The Ghosts”, a kind of rock road-trip, drums and guitars speeding along while Wendy James’ melody soars above; it’s a fabulous song, almost the best on the album. “Bad Valentine” is soft and, by contrast, very subdued, a short, slightly cutesy ode to the disillusion of relationships: “and I collect all the cards that you sent/ But I could not say/ If I should stay/ I might not even/ Even remember your name/ Oh what a shame”.

None of these ten songs give much indication of what comes in the final song, “Velveteen”. At almost 10 minutes’ long, the song flits between a variety of styles, from full-on rock to classical strings to late-night erotica, with a loose structure of lengthy verses and not so much a chorus as a refrain that regularly returns – it’s like a cross between “Bohemian Rhapsody” and “Welcome to the Pleasuredome”. Despite its twists and turns, there’s a powerful sense of increasing tension throughout, the lyrics relating the tale of separated lovers finally reunited; the culmination is an extraordinary scream from Wendy, suggestive of both pain and pleasure, as well as overwhelming release. Every aspect of the song is amazing; the band, especially Wendy James, have never sounded better than this. It is, in my opinion, one of the greatest songs of all time, and reveals that, on a few occasions, Tranvision Vamp were capable of sheer brilliance.

[…] two tracks, starting with Transvision Vamp; my love of this group has already been mentioned in my article about Velveteen; “Down On You” comes from this fine album and finds singer Wendy James at her most […]