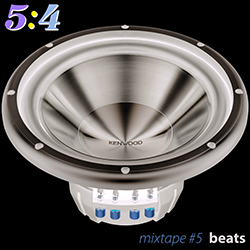 If music was my first love, then my fascination with rhythm was the first part of that attraction; beat-driven music—particularly early hip-hop and electro—dominated my earliest teenage years. My taste in beats has evolved since that time, of course, and the selection represented here (which may well come as little surprise to regular readers) is a selection of relatively recent music. Each of them has something distinctive, something that separates it from the terrible plethora of dance music that predominates the current musical landscape (at least, the popular landscape); each of them, too, is in my opinion one of the very best tracks by that artist.

Plaid‘s “Upona” is arguably their crowning achievement to date; it’s rare in being able to portray two concentric layers of sound, moving at radically different tempi, either of which can, at any point, qualify as being the “foreground”. Furthermore, the soft chords combine perfectly with the weird, shuffling beats (which, if you focus on them, sound as though they’re continually just a hint out-of-sync)—it’s a brilliant track. i don’t much care for Björk‘s “It’s In Our Hands”, but The Soft Pink Truth have created one of her finest remixes, surrounding her, for once, straightforward vocals with beats that drive one minute and fragment the next. Why super_collider‘s two albums aren’t better known is a mystery to me; maybe this mix can do something to help that. Painstakingly-fashioned neo-funk electronics collide (their name is wisely chosen) with Jamie Lidell‘s astonishing voice to result in some of the most downright clever music that beats have ever known; “Close To A Change” is, in my opinion, their best track. i’m going through something of a transition, as far as Venetian Snares is concerned. His vast output suggests someone with quality-control issues, and yet he somehow creates one excellent album after another (Rossz Csillag Alatt Született is, frankly, miraculous). Nonetheless, i’m wondering if he’s now reached a plateau of sorts; each album since, while nonetheless impressive, seems to be going over old ground—My Downfall (Original Soundtrack), in particular, widely tipped as a successor to Rossz Csillag, is an artificial-sounding disappointment. His new album, Detrimentalist, comes out in June; we’ll see, but my hopes, sadly, are becoming lower with each new release. i can’t claim to know a lot of Squarepusher‘s output; i’m slowly working through his albums, but haven’t yet heard anything to compete with Hello Everything. There are so many good tracks on that album it was hard to choose, but this is a superb example of what he does when beats fall under his fingers. i mentioned Cyclo. in my post about Ryoji Ikeda some time back; his collaboration with Carsten Nicolai is similar to his solo work, beats emerging from raw sound forms. To be honest, i don’t like much of Luke Vibert‘s music; almost all of it’s derivative, and a lot is just plain dull, but YosepH is a relief from that. “Slowfast” has taken its time to grow on me, but i’m crazy about it now; it does exactly what the title suggests: relaxed beats above a rapid bassline: fabulous.

Radiohead might seem incongruous here, but they have a way of working with beats that is unique. In years to come i may well conclude that Kid A is the greatest album of all time; in “Idioteque” the beats sound oppressive, and it’s difficult to determine whether they’re supporting or hemming in Thom Yorke‘s vocals; i love the ambiguities in their music. i can’t make my mind up about Gui Boratto; for now, i’m intrigued by his music and need to spend some more time with it—”The Blessing” is one of the most striking tracks on the album. Trentemøller, on the other hand, i have no reservations about; where beats are concerned, he’s a genius, with a sound that is entirely his own. He’s the only artist in this mix who creates loop-based material (which, usually, i don’t like), but his music is always interesting, with a strong sense of direction. “Gush” is rare (both in his output and beat-based music in general) in containing no melodic material whatsoever; everything is percussive or noise, demonstrating how original and brilliant he is. Of the artists represented here, Aphex Twin is the one whose music i’ve known for longest; drukqs doesn’t seem to appeal so much to the Aphex “purists”, but i feel it’s arguably the best example of his work. True, it doesn’t include anything that could accurately be called “ambient”, but i’m not convinced that kind of music is as significant to him as some claim (it defines someone like Brian Eno; it doesn’t come close to defining Aphex Twin). “Cock/Ver 10” is Aphex at his frenzied best, rhapsodic, unpredictable, wonderful. From the ambient electronica direction comes Ochre, who seems to have found a small number of beats and is determined to bang them until they fall apart. To that tautological end, a lot of his tracks pretty much sound the same as each other, but “Involution” shows him at his best; it would be good to hear more of this quality from him (and maybe some new beats in due course too…). And to finish: Autechre‘s “Gantz Graf”, without any doubt in my mind the most amazing beat-oriented bit of music ever created. It tends only to be spoken of in conjunction with its admittedly astonishing video, but the music also needs to be heard on its own terms. Every time i listen to it, i hear something new; if Autechre had only ever created this track, they would still have to be held up as the most talented composers ever to have worked with beats. i’m not exaggerating when i say i regard it as one of the finest achievements in the history of music.