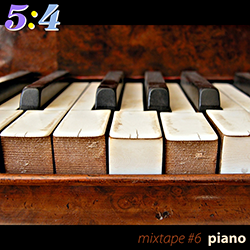 For years, the piano has been to me an object of fascination and awe; its range of capabilities, expressive potential and timbral variety are breathtaking. Also for years, these qualities were the very things preventing me from attempting to compose something for it. Listening to piano music is a supreme joy, and so this new mixtape is a concoction of some of the more interesting examples that have been occupying my ears of late. It also represents some of my favourite composers, all of them bringing something unique to the instrument.

Two of Shostakovich‘s Op. 34 Preludes were among the first piano music i ever learned – not, i must add, this particular prelude, which demands incredibly nimble fingers! Scriabin‘s 10 sonatas are an enthralling journey from the last vestiges of late romantic tonality into the new realm of free atonality. The various movements of Galina Ustvolskaya‘s first sonata initially sound stark and unappealing, but develop into complex, astonishingly loud material; this is the fiery last movement. Ligeti‘s Études are deservedly well-known; many of them, like this one, are rather like sonic tongue twisters. George Benjamin‘s music has interested me for a long time; it often comes across as rather too cerebral (or, at least, po-faced), but this early piece (and, indeed, his playing) is full of spontaneity, with lovely deep bass textures. i think Aphex Twin‘s prepared piano miniatures found on drukqs need to be taken seriously, bringing a freshness to this sound-world that hasn’t been heard since Cage pioneered it. Tom Adès‘ piece meditates on atomised material from John Dowland, weaving tense, tremulous threads that finally coalesce into an astonishingly moving sotto voce verbatim quotation. Pretty much no-one i know listens to Sorabji, which is tragic considering how utterly individual and original he was; and, indeed, collossal: this strikingly beautiful excerpt comes from his epic Opus Clavicembalisticum, one of the longest piano works of all time (4¾ hours); it’s played here by the incomparable John Ogden. Andrew Liles has occurred in most of these Mixes, and here he is once again, an excerpt from the opening of what i believe to be one of his masterpieces, The Dying Submariner; subtitled, ‘A Concerto for Piano and Reverberation’, it’s an absolute tour de force – the piano as you’ve never heard it before. My own work, In Paradisum, is my first for the piano, written two years ago, in memory of my father. Michael Finnissy’s English Country Tunes is one of the great piano works of the twentieth century, a cavalcade of gestures that bespeak vast emotions; this is the final, climactic, movement. Conlon Nancarrow is a composer whose work i’ve been studying for a while (using Kyle Gann’s superlative book as my guide); this is one of his most fun studies, the first of the so-called ‘Boogie-Woogie Suite’. i greatly admire George Crumb‘s innovations, but more i love the intimacy he creates in his work; this short movement from his Little Suite for Christmas is a gorgeous example of that, with lovely muted piano notes. There’s more to Tōru Takemitsu than dreamy orchestral washes about gardens, birds and water; this little piano piece juxtaposes angular, almost violent passages with resonant bell-like chords. And to finish, the last of Messiaen‘s sumptuous early Prèludes, with more than a hint of Debussy lurking in the material.