The ambient tradition: black on black – Lustmord and the dark side of ambient 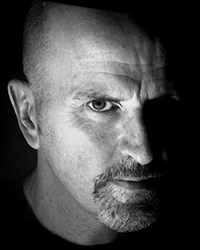 At its best, ambient descries a vista that is vast in scope, epic in scale, often ablaze with light. However, light presupposes darkness (check Genesis if you don’t believe me) and likewise all landscapes have their shadows. From the deepest of them (perhaps their very source), comes the voice of Brian “Lustmord” Williams, ascending like a black, primordial plume. If dark ambient can be said to originate with anyone, Lustmord must be one of the prime contenders. But “dark” in more than just the most obvious, superficial sense; from his earliest experimental releases, Lustmord has unswervingly focused his attention on the blacker regions of existence and experience. Titles such as Paradise Disowned, Heresy, The Place Where The Black Stars Hang and The Monstrous Soul are poetic and wildly evocative, conjuring up worlds that are no less infinite, but of a very different hue. This is mirrored in the sources of his material, emanating from crypts to caves to slaughterhouses, from deep within a shelter to deep beneath the sea; in the preparation for his canvasses, Lustmord goes to remarkable and highly symbolic lengths to acquire his pigments. It has to be said, though, that Lustmord’s dark ambient associations occasionally lead him in an unhelpful direction. Akin to the teenage goth, some of his works sound almost like a parody, their darkness taken to ludicrous extremes, in the process losing all semblance of seriousness and intensity. The most glaring example of this is the relatively recent Rising, a document to Lustmord’s performance at a Church of Satan event in 2006. Both this album and its successor, Juggernaut, suggest an unfortunate development, the music sounding like it is trying rather too hard to affect an air of menace. His earlier creations are far more natural and more genuinely unsettling, their textures effortlessly blending in an aural equivalent of the black paintings of Ad Reinhardt. Like Reinhardt, one can skim the surface of the work, allowing its essential tone to envelop the senses; or one can examine more closely, and find layers that at first seemed impenetrably hidden—another example of the dual properties of the “ambient tradition”.

A good place to start is Heresy, one of Lustmord’s earliest releases, pre-dating Aphex Twin’s first ambient album by two years. It’s a weighty foundation of deep bass movement and drones, overlaid with a canopy of industrial noise, nervous metallic stutters, animal sounds, laughter, thunderclaps, and the distant laconic drawl of some Eastern horn; forget Rising, this is Lustmord’s most authentic black call to prayer.

Alongside the earlier, more fragmented Paradise Disowned, it’s an auspicious, even awesome opening gambit—but one that also sets the bar very high at the outset. While one shouldn’t regard Heresy as a benchmark, it’s difficult to avoid drawing contrasts. The Monstrous Soul, despite its noticeable ambition (the second track lasts over 25 minutes) doesn’t really succeed in terms of interest; until, that is, the final track, “The Fourth and Final Key”, a piece that unfolds with infinite patience and a single-minded clarity of expression that isn’t heard on the rest of the album. If anything, it’s the track where least happens, but it’s precisely at this point that the music begins to feel untethered, drifting with a gently hypnotic buoyancy.

Continuing in this vein, his next album, The Place Where The Black Stars Hang, is a supreme achievement, a real tour de force; this really should be regarded as a benchmark for dark ambient. Lustmord’s ideas and material feel distilled; gone are the more obvious attempts at mood-painting, replaced with a vast tablet onto which indefinable shapes and gestures are etched. He also introduces material that repeats and oscillates, and it’s this blend of the cyclic with the sporadic that makes the music so good. Certainly, Eno’s “ignorable” and “interesting” qualities are deep in the grain of this album, which i would argue is his best. The two longest tracks, “Aldebaran of the Hyades” and “Metastatic Resonance” (each around 25 minutes long) are outstanding, the former for its enveloping presence within which one can genuinely float, the latter for its striking aquatic opening that then develops into a rapturous drone piece. The sheer beauty of both these tracks is astounding.

Unfortunately, little that Lustmord has created since equals the unified depth and intensity of expression heard on this album. As i said before, he seems to take himself—and the aural environment he’s seeking to create—too seriously (Rising becomes almost risible at times), and there’s also a tendency for his albums—even within a generally consistent overall tone—to lack a sense of unity from track to track (this is certainly what blights Metavoid). Nonetheless, no-one does dark better than Lustmord, and when he gets it right, the results are better than most; one just needs to be selective. Much of Purifying Fire is worth hearing; “Deeps Calls to Deep” is the stand-out track (interestingly, this title actually comes from the Bible (Psalm 42)!); achingly wonderful, it demonstrates the kind of gravitas that can be brought to ambient music. and despite its unintentional humour, “Compassion” on Rising is a nice meditation, the drifting wafts of plainchant sufficiently blurred to avoid sounding mainstream, the bells intoning a solid, nocturnal solemnity.

A particularly interesting album is Lustmord’s collaboration with the legendary Robert Rich, entitled Stalker. Alongside Eno, Robert Rich is perhaps the most significant composer in ambient’s history; his works are rather too sugar-coated for my liking, but they nonetheless contain the greatest ambition ever brought to ambient—his astonishing 7-hour Somnium (which i still haven’t heard in its entirety; i’m always falling asleep… but isn’t that the point?) is the longest album ever released. It may seem unlikely to pair Robert Rich’s determinedly restful sonics with Lustmord’s dogged ominousness, but the result seems to refine the tendency of each to lurch towards their respective extremes. Stalker—composed as the imagined soundtrack to Andrei Tarkovsky’s film—is mellifluous, velvety, and at times, amazingly beautiful. The deep bass accents heard early in “Hidden Refuge” are especially striking, as are the plangent and very moving breathy tones of the bass flute in “Undulating Terrain”. Stalker arguably deserves to sit alongside Music for Airports and Selected Ambient Works, Vol. II as one of the best ambient creations of all time.

Lustmord’s new album, Other, is released on 21 July. i, for one (and for a change), would like to see less of the new, and more of Lustmord’s authentic early voice, inking its vision, black on black.