The Barbican, London: Drifting and Tilting: The Songs of Scott Walker 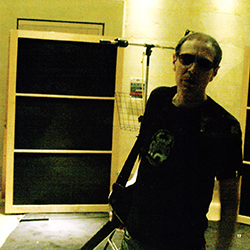 Last night, the Beloved and i were fortunate enough to be at the Barbican for the final performance of the three-night-only run of Drifting and Tilting: The Songs of Scott Walker. Devised by Walker himself, the performance comprised eight of his songs—taken, no surprise, from The Drift and Tilt—re-imagined for a visual presentation, the vocals delivered by a variety of singers, including Jarvis Cocker, Dot Allison and Damon Albarn. Booked many months ago, this is one of the most anticipated events i’ve ever attended, although i’ll confess i was uncertain of how successfully other singers would be able to bring off Walker’s utterly unique creations. As usual for me, the days leading up to it were filled with Walker’s music, especially Tilt and The Drift, which only fuelled my excitement.

Before the evening performance, the Barbican had sensibly programmed Stephen Kijak’s documentary about Walker’s career, Scott Walker: 30 Century Man. i’d not seen the film before, and found it totally enthralling, even more so considering—to my surprise—how much Scott Walker himself discusses his output, in addition to the fascinating glimpses into the production of The Drift, including a remarkable scene where a percussionist repeatedly thwacks a side of meat, urged on by Walker from the mixing desk. It also set the scene for the show to follow, including contributions from many of the singers taking part.

The performance began—with ultra percussive rock gusto—with ‘Cossacks Are’, given by Jarvis Cocker, England’s most laconic northern fop. Much as i have time for Cocker’s wilful playfulness in his own material, he seemed entirely out of place in this stark, thunderous music. i can see why they’d given it to him, as the lyrics largely consist of a wry compilation of newspaper-like tags and clichés, and Cocker spewed them out with, at times, visible (and highly appropriate) malice, but it didn’t change the fact that Walker sings these lines, and Jarvis did nothing of the kind. It’s a shame, as he can sing pretty well, but not here, and, combined with essentially no staging, it reduced ‘Cossacks Are’ to a posturing act of sarcasm. We all clapped respectfully, but i was glad when it was over.

Given a parenthetical subtitle of “September Song”, ‘Jesse’ was given to Gavin Friday, about whom i knew and continue to know little, and following his overwrought performance of this gorgeously delicate song, i have no desire to find out more. The staging was simple but effective, particularly when the screen separating Friday from the figure beyond suddenly erupted in light, the figure turned first to a growing shadow, then to a gravestone, finally—critically—splitting in two, evoking both the instant visage of twin towers, as well as the notion of twins at the heart of this song. It was marred by Friday’s performance though, which seemed to be trying much too hard.

Perhaps Walker’s most brilliant song (for want of a word that hasn’t been invented yet), ‘Clara (Benito’s Dream)’ was transformed from a 12-minute edifice into a 20-minute theatrical behemoth. The words were divided among Owen Gilhooly, Nigel Richards and Dot Allison, accompanied by the remarkable sight of a boxer pummelling a pig carcass, and a dancer exploring a highly expressive choreography that at times beggared belief in its ferocity. This was the highlight of the evening for me, searingly horrific and a worthy re-invention of the song. The male singers were especially good, Gilhooly singing throughout while on his back, as though poised to be strung up; Richards serving to comment on the mounting drama; Allison didn’t have much to do here, but her time would come later. Amazing. 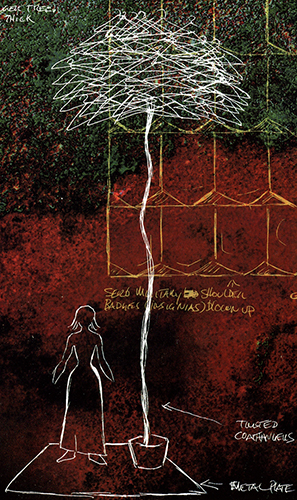 An inscrutable song at the best of times, ‘Patriot (a single)’ was served up as a comic whirligig of actions surrounding and molesting a central, omnipresent fool: a male (Gilhooly again), clad in black satin knickers and stockings, finished off with pink high heels and a nylon tight stretched over his head. The comic touches, together with the mellow tone of the music in this earlier song (soft strings and fretless bass), made for a highly disturbing and moving scene. i can’t claim it’s helped me to get inside the song much more than before (it’s musically the most ‘accessible’, but lyrically particularly recondite), but somehow things seems strangely more certain as a result.

Dot Allison returned with ‘Buzzers’ (tonight subtitled “Faces of the Grass”), in which she gave a tour de force delivery, proving that the transfer to a female voice and register meant no loss of the original’s power. One of Walker’s most overtly political songs, it was framed within equally overt and pointed imagery, including (from Walker’s original sketch, included in the programme) “Serb military shoulder badges (insignias)”. While her soft blue forever clashed against the painful reds behind her, Allison seemed aching to leave the tree (fashioned from coathangers) to which she clung, yet seemed unable to keep from returning to it; similarly, her voice was by turns delicate and surprisingly cutting, an interesting side to her personality rarely heard in her own recent music.

Nigel Richards returned to take centre stage in the nerve-jangler ‘Jolson and Jones’. His operatic background served him well, tapping into the psychological terror that makes up this song’s soliloquy. Behind him, bleak elliptical footsteps glowered and a quasi-wrecking ball splattered what appeared to be wet mud, while Richards seemed to obsess himself into a crazed decline; as he almost yelled about punching the donkey in Galway, clutching a tail in his hands, his insanity seemed utterly real, captured best in his final faux-braying. Breathtaking and horribly memorable.

‘Clara’’s great rival, ‘Cue’ (yet another parenthetical subtitle: “Flugelman”) was given an ominously static staging, Michael Henry’s vocals delivered poe-faced against a screen portraying something akin to bacteria, looking like viral will-o’-the-wisps. The visual quiet was first punctuated by the violent twin strikes of percussionists wielding breezeblocks (one of which actually began to crumble into pieces on its final note), and later by a row of impossibly bright arc-lights, mercilessly pulsating directly at us, full force. The staging didn’t add a great deal to this song, although it clearly made the abrupt shifts in dynamic even more violent; Henry’s voice, not dissimilar to Walker’s, somehow didn’t entirely convince, though.

To finish, the most melodically far-reaching song from either of these albums (and one of the most beautiful songs ever written), ‘Farmer in the City (Remembering Pasolini)’, with Damon Albarn at the helm. The imagery was compartmentalised: masked auctioneers at far left and right, a wellington-boot-clad Albarn dead centre, stood behind a lectern; on one side a pastiche religious painting of a football team (replete with halos), on the other what appeared to be part of a wooden toilet cubicle, daubed with Italian accusations of homosexuality; above all, a dark city skyline, that seemed to dawn at the end. All fascinating stuff, but i feel it only served to add to the impenetrability of this ravishing music. i suspect Albarn’s presence would have excited and worried people in equal measure; his delivery contrasted entirely with Cocker’s, pretty much note-perfect, although clearly having to work to reach Walker’s high falsetto notes; i quickly forgot he was Damon Albarn, as his intense, sincere delivery integrated entirely into the exquisite string pulsations.

Overall, i can’t help but feel it was a very interesting experiment, very successful at times (the imagery from ‘Clara’ and ‘Jolson and Jones’ will never fade), rather feeble at others. There can’t be any doubt that it would have been better to have heard Walker sing his music himself, but how he’d have integrated into the staging is hard to know; perhaps in this sense, it was best to draw on other performers. As a final note, it was especially lovely during the applause when the performers all gesticulated their thanks up towards the mixing desk; gradually, the audience realised that Scott Walker—cap over his eyes as ever—was there, leading to a lengthy standing ovation, where we all clapped and whooped and cheered. It was an exultant moment, and one can only hope that Walker takes away encouragement from this, that he can create among the most difficult, stubbornly challenging and utterly unique music ever made, and be loved and respected for it.

Thanks so much for this review. (Which I am very late commenting on, obviously). I had tickets for this but ended up not being able to attend, so it’s great to have a thoughtful and detailed review.