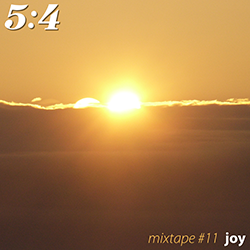 Following a hectic Easter weekend, and a few days spent in Cambridge, here’s a new mixtape, the theme this time being joy. To start, a wonderful jazz-folk fusion number from Yellowjackets; Greenhouse is an album i’ve loved for years, and “Freda” is one of its most exciting tracks. It’s followed by the last movement from one of Michael Tippett‘s earliest mature compositions; strident and full of momentum, it briefly allows a moment or two of wistful reflection before culminating in an elated dance. Freezepop‘s latest album remains their one consistent release, and “Ninja of Love” is one of its most infectious songs. Continuing the pace like a runaway train is the opening track from Squarepusher‘s brilliant 2006 album Hello Everything, “Hello Meow”, filled with retro synths and riffs. Each album by Deerhoof has its share of instrumentals, and “Rainbow Silhouette Of The Milky Rain” bludgeons its experimental way along in rip-roaring fashion. The mix now enters a gentler mode, beginning with Imogen Heap‘s ravishing track “Just For Now”, all glorious (if realistic) optimism. And then Björk, who has surely composed some of the most unreservedly happy songs ever; “All Is Full Of Love” is here given extra treatment in the form of beats and strings, becoming if anything, more ecstatic than the original version. The “Communion” from Tournemire‘s Easter music shows him at his mystical best, placing the plainsong themes into complex, shimmering chords that hover and float in rapture. Julee Cruise, bless her, only knows extremes: her music is either abjectly mournful (“The Dying Swan”) or caught up in ecstasy, as she is here, in one of her most well-known songs.

More Easter music follows, in the form of Patrick Gowers‘ anthem for Ascension Day, Viri Galilei, about which i’ve written before; framed by long, slow melismas, its central episode (beginning when the text speaks of Christ’s second coming) and ensuing chorale is as glorious as Church music gets. The VOX cycle by Trevor Wishart is one of the great electroacoustic works of the twentieth century, of which its final, sixth, part is the most unexpected; adopting the trappings of ’80s dance music, the singers ceaselessly explore the word “dance”, interspersing it with somewhat comical raps (“do the new complexity finger snap”!); a frenetic, brilliant oddity. Operator Please take over with the shorter of the two “Kissy Sell Out White Stallion” remixes of their song “Just A Song About Ping Pong”; it also references sounds of the ’80s, this time late ’80s synth-pop, sounding at times distinctly like Erasure. After this, an exquisite little number from Underworld‘s excellent 2007 album Oblivion With Bells—what can i say, it just sounds full of happiness to me. Equally upbeat is Joanna Newsom, in a song from one of her early self-released EPs, Walnut Whales; it’s a real shame she didn’t include this on The Milk-Eyed Mender, as the song is really lovely. In its wake, of Montreal burst out, shards of chamber pop, surreal retro and glam campery flying in all directions; even though its part of their modus operandi, i’ve left out the sudden change of style towards the end of the song, instead switching into Goldfrapp‘s “Happiness”, understatedly laden with gentle jollity, and with a genuinely happy, anthemic campfire chorus. Anyone who’s followed the egregious line-up changes of The Pipettes during the last year will know that the group is effectively now dead in the water; despite its poor mastering (at present, i only have the horribly over-compressed US version of their album), “Pull Shapes” captures them at their finest hour, conjuring up parents’ embarrassing dancing at Butlins, but steadfastly cool nonetheless. More Easter music after, courtesy of Eric Whitacre, something of a Morten Lauridsen wannabe, but who occasionally stumbles upon something exciting; this setting of E. E. Cummings’ poem “i thank You God for most this amazing day” works well. And to finish, Jean Langlais‘ stunning, overwhelming paraphrase on the Te Deum plainchant, played here by the great Naji Hakim on the organ of La Trinité.

90 minutes of joy — here’s the tracklisting in full: