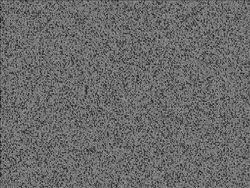 This is why we have eyes and ears.

Last night, i was fortunate to be seated in the front row of the CBSO Centre in Birmingham, for Ryoji Ikeda‘s first UK concert since 2006. datamatics [ver.2.0] has been around internationally for a little over two years, and yesterday finally found its way to Britain. The plain interior of the CBSO Centre was embellished with the addition of a huge screen, that filled the air with the pungent aroma of plastic newness. In its own way, this actually contributed to the occasion, making for an astonishing son et lumière display that literally saturated the senses with cutting-edge modernity. 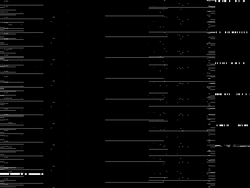 Ikeda’s preoccupation with data, in all its manifestations, is legendary, and has been taken to truly epic proportions in the visual aspect of datamatics [ver.2.0]. Throughout its 45 minutes’ duration (which passed remarkably quickly), we were subjected to a plethora of data sources, from micro to macro. The introduction began with the root of all data: numbers [IMAGE 1 – click the thumbnails for high-res images] – thousands of them, everywhere, flooding the screen with the semblance of white noise or interference, before giving way to their counterpart: rules and measures [IMAGE 2] 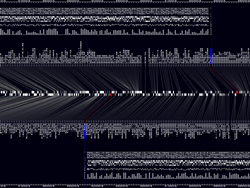 , scrolling vertically up and down at different cycle rates, completely matching those in the audio. And then, abruptly, the screen erupted in a maelstrom of data flows [IMAGE 3]; the information streamed past at such speed that it was only possible to catch glimpses of the detail, but byte sizes, wave forms and spectrum analysers were all part of the mix. As were, most noticeably, allusions to DNA, both in the visual appearance of DNA profiles and also in the presence of the letters A, C, G and T, an obvious reference to the four bases in DNA. 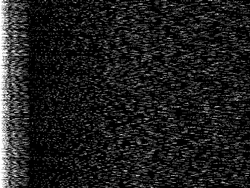 In the midst of this, loud both visually and aurally, yet more data, illustrating i know not what (possibly allusions to genes?)—but it was already clear that the supersaturation of detail was precisely the point, and that catching the broader sense of the kinds of data hurtling past was all one could hope to achieve.

A brief episode followed, shifting the emphasis in a more abstract direction, with pulses flying from left to right at a myriad of speeds [IMAGE 4] 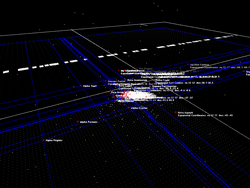 ; the similarity to travelling through space at warp speed was reinforced by what followed. In a lengthy period of repose, a vast grid of points materialised; as we slowly circled around it, x- and y-axes shifted in space (literally), plotting the positions of a large number of celestial bodies and constellations, each one emphatically fixed in place with one of Ikeda’s familiar high-frequency ‘pings’; as each one appeared, a red cross left hanging at its location, the star’s name briefly appeared [IMAGE 5]. For all its frenetic energy, Ikeda clearly likes his work to take its time, and this astronomical assembly was beautifully unhurried, taking many minutes to coalesce, ever undershadowed by a deep, warm ambient cloud; as it went on, further information about each star also appeared, including coordinates and more esoteric data. 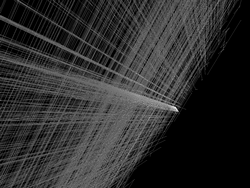 Assorted ornaments came and went in their own tempi, lines of data sliding across the grid (at times a little redolent of Autechre’s seminal Gantz Graf), before everything was turned inside out and upside down, the whole transformed into a vast abstraction of twirling lines and points [IMAGE 6].

After a lengthy silence/blackness, Ikeda began again, moving abruptly from the vast scale of galactic distances to the infinitesimal dimensions of biological elements. At first, this resembled some kind of obscure map, linking unnamed geographical points [IMAGE 7] 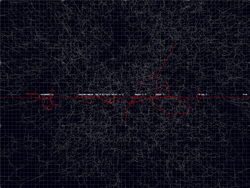 , but as we circled around, its true nature became more apparent. Then, suddenly, all was clear, as once again the temporary stasis exploded back into rhythmic life, the screen now dedicated to genes and chromosomes [IMAGE 8], thousands of recondite names and descriptions appearing faster than the eye could register. And now came the first flashes of what would become the coda: brief glimpses of data readouts, various breakdowns of assorted code [IMAGE 9], suggesting themselves as being from the innards of datamatics [ver.2.0]‘s core. 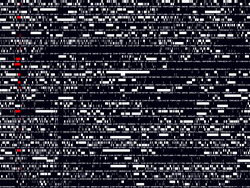 These were dismissed with some harsh, kaleidoscopic glitches before another lengthy episode began, in both content and delivery a sibling of the star-chart from before. A 2-dimensional grid appeared, and x- and y-axis markers slowly took their positions over a deep bass throb; whereupon, the stars appeared once again, one by one, the fixed centre of the grid shifting to the correct relevant point for each one [IMAGE 10]. Again, Ikeda’s patience in allowing a process time to register yielded yet more subtleties; that the next star’s position was already highlighted in red before we arrived at its position; that the star’s name and other data was pre-empted in the top-left corner—things that only became noticeable over time. 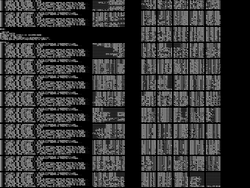 Having incorporated, scrutinised and abstracted data from so many aspects of existence, Ikeda ultimately took this notion to its logical conclusion. In an act of existential bravado, the final minutes of datamatics [ver.2.0] were spent deconstructing itself, assorted random frames from earlier scrolling around the screen, with portions its own data now exposed [IMAGE 11]. 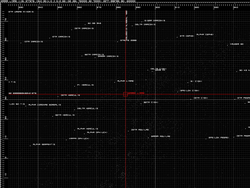 This assumed manic proportions, the audio convulsing and pounding, the visuals running amok, flashing frames hurtling around, both glitching and contorting in crazed fashion, bombarding the senses at breakneck speed, like some kind of digital danse macabre [IMAGE 12 – which doesn’t do it justice], culminating, as it only can, in exhausted silence. 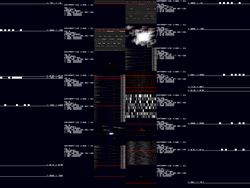 Ikeda’s work speaks big things about humanity’s engagement with both itself and the universe within which we find ourselves. Our need, first to name things, then to codify them, analyse, define and catalogue them (in order to begin to make sense of them and have meaningful dialogue about them), is at the heart of every moment of datamatics [ver.2.0]. Akin to Neo’s epiphany at the conclusion of the first Matrix film, Ryoji Ikeda has given us a distinct, pervading sense of the inner workings of things, the quiddity of existence, if you like. As never before, Ikeda has gone beyond music (and film, for that matter), and shown us—in spectacular fashion—something raw and vital, something quintessential. 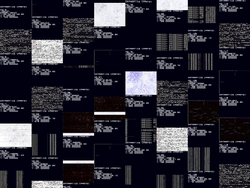 datamatics [ver.2.0] takes sensory stimuli to entirely new—and extreme—levels (we were even issued with earplugs, thankfully not needed); the accuracy of synchronicity between sound and sight was nothing short of amazing, even their respective palettes—deep and high, percussive; black and white, flecks of primary colour—perfectly aligned. Such fundamental things as these can be offputting, appear unrefined, seem harsh and abrasive; but, of the experience, i believe Ikeda himself said it best, in the opening words of “Trans-missions” (from 1000 Fragments), words that i adopted as the motto for 5:4: “It’s the most beautiful ugly sound in the world”.

I saw the North American premiere of this, and it was stunning. The ramifications of working with such extreme scales (from the genome to the cosmos) are delightful: simultaneously frenetic and measured, forensic and euphoric.

I wrote up the show at Harvard here.