How quickly a year passes. On this day, 12 months ago, Danielle Baquet-Long died, bringing to an abrupt end the remarkable musical project that she and husband Will had crafted together for several years. Of course, music, like life, goes on regardless, and the prospect of plenty more releases yet to come from both Celer and Chubby Wolf (Dani’s solo project) continues to be an exciting one. 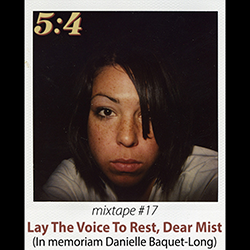 To mark today’s sad anniversary, the new 5:4 mixtape is in Dani’s memory, bringing together a diverse selection of music that broadly falls into the ‘ambient drone’ category. Drone has entranced me since i was pretty young; in the right hands, it has a quality that always seems familiar, yet somehow achingly inscrutable and difficult to define; close and intimate, yet also impossibly distant. But this kind of music (and certainly on an occasion such as this) is perhaps best not written about in too much detail; suffice it to say the examples here range from vast, dazzling textures that seemingly envelop everything in sight to gentle half-heard whispers. Of course, Dani’s own music is included, the final (very brief) example of which gives the mixtape its name.

In total, two and a half hours of music to commemorate the life of one of ambient’s more insightful and imaginative figures. The complete playlist is as follows:

Wow, this looks great. Thank you!!

[…] but you can hear a brief excerpt from No Man Put Asunder: 7 Fruitful And Seamless Unions on my 17th Mix Tape; the excerpt—which includes the deep bass pulse mentioned above—starts 58 minutes into the mix, […]