The new 5:4 podcast is a presentation of a field recording i made of the dawn chorus, a couple of months ago.

The recording was made at Lower Woods Nature Reserve, about which a little more can be read/seen via the following links:
Gloucestershire Wildlife Trusts
Wikipedia
Geograph (it was beside this bridge that the muntjac deer began barking)
Geograph (where part of the latter portion was recorded)

i arrived here, by the lodge: 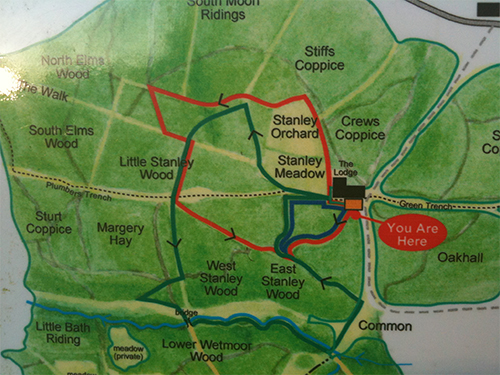 If you enlarge the map, and zoom out a touch, you’ll be able to make out a pathway running southwards, and it was down there, in the Common, that the recording began. Overall, it’s clearer on this map of the reserve (left-click for full-size). From the Common, i crossed the bridge (seen in the first Geograph link above), followed the river west towards Lower Wetmoor Wood until i reached the other bridge (shown on the map), then north beside Stanley Wood to Plumbers Trench, along the trench (where assorted rabbits were playing as the sun finally began to rise above the horizon) and then finished with a leisurely ramble in East Stanley Wood.

The equipment used was a Sony PCM-D50 digital audio recorder (44.1kHz/16-bit) with a windshield and miniature tripod, listening through Sennheiser HD 25-1 II headphones.