This week marks the 25th anniversary of, in my view, one of the finest pop songs ever recorded: “Take On Me” by a-ha. It could be argued that the release of “Take On Me” marked a turning point for pop, which had spent the preceding years mooching around in New Romantic guise when it wasn’t posturing in Soft Rock or shuffling around with the Goths. To some extent following OMD’s lead, a-ha pretty much defined synthpop in this breathtaking song, although it took them three attempts to do it. Let’s go back to the beginning.

The song first began to take shape as early as 1982, when a-ha barely existed, the trio shacked up in a cabin in their native Norway, putting together a series of demos. Back then it was called “Lesson One”, and while the band used obviously cheap and cheerful synths and drum machines, the basic elements of the final song were already firmly in place, most notably the recurring synth riff as well as much of the main melody. Structurally though, it’s all over the place, sounding like three different songs awkwardly stitched together, not one of them possessing a chorus to speak of. It therefore comes across as rather odd, excruciatingly so when Morten Harket inexplicably lets loose a bizarre, horrifying whoop a little way in (0:41 – a moment he’d probably like to forget).

A year later, now calling themselves a-ha, the group spent several months recording demos in London, at a small studio called Rendezvous. It was here that “Take On Me” properly took its final form, bearing little resemblance to the miserable demo from 1982; all the basic elements—lyrics, structure, melody and harmonies—are the same at this stage as in the final version. Nonetheless, it’s clearly still a work in progress; Harket’s singing is still too waivering for its own good, despite the remarkable demonstration of his vocal range, as heard in the chorus, no less than two-and-a-half octaves. The impressive chorus goes some way to contrast with the verses, but there’s still a dynamic flatness that stops the song being terribly inviting, something the all-too-plain instrumental simply can’t solve on its own. 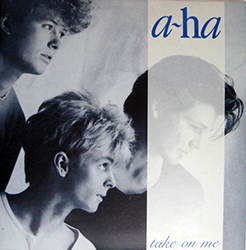 The Rendezvous studio was owned and run by John Ratcliffe, who encouraged the group and showcased them at the studio, resulting in a signing with Warner Bros.. This, in turn, led to them working with producer and songwriter Tony Mansfield; recognising the potency of their already electronic-driven sound, Mansfield introduced a-ha to the twin delights of the Synclavier and Fairlight synths, both of which came to dominate much of early ’80s music. Under Mansfield’s guidance “Take On Me” was extensively polished; the overall sound became broader and richer, and was given some vital depth and perspective by reverb and string pads. And while the exuberant last verse and chorus cause his voice to waiver once again, this version does finally reveal Morten Harket’s voice in all its majestic glory; the chorus melody in particular is breathtaking. Nonetheless, for all its gloss, the song still sounds surprisingly thin; the drums don’t drive the song along terribly successfully (apart from the bridge passages) and the verses are rather sparse; there are also some distinctly Art of Noise-style stings in the instrumental that sound amusingly ‘of their time’ but hopelessly incongruous in this context. This was eventually released as a 7-inch single in 1984, selling a reputed 300 copies. 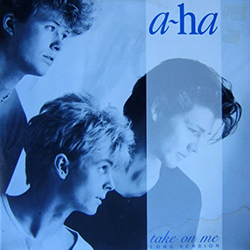 As was the custom, a 12-inch single was also issued, for which a rather misnamed “Long Version” was produced (barely 30 seconds longer than the 7-inch version). The remix takes an even more spare approach to the song than the original, stripping away the soft pads to leave an almost unaccompanied Morten Harket in the first verse. The percussion, though, is more inventive and effective here, although the hectic drum breaks are overdone. However, structurally, it takes a turn for the strange; following the second chorus, there’s a jaunty episode, after which an apparent third verse begins, only to be abruptly halted by the instrumental from the 7-inch, a weirdly inept moment. Despite this—and if one disregards the appalling bit of stuttering applied to Harket’s voice at the end of the final verse (samplers have a lot to answer for)—it’s not without its charms, presenting an interesting alternate take on the song. 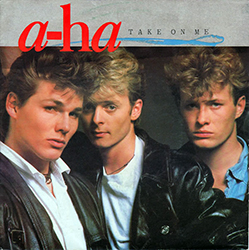 While Mansfield remained sceptical of the song’s merits, the band felt it could be presented even better, and managed to persuade Warner Bros. to let them have one last shot at it. Alan Tarney was assigned to the task, and with him the band honed the song yet further. First and foremost, the percussion was brought out of the shadows, now propelling the song along with force and clarity, even through the more pensive instrumental, pausing only before the final bridge. Magne Furuholmen’s infectious synth riff, a constant through all the song’s manifestations, is pushed firmly into the spotlight, ultimately becoming as memorable as (if not more than) both verse and chorus. The general synth sound is made more mellow and subtle, integrated infinitely better into the song’s other elements; it makes it obvious just how much the blatant sense of electronic novelty heard in the previous versions got in the way of the song. Here, by contrast, right from the outset, with the questioning gestures of the new introduction, everything feels comfortable, everything fits, freeing Harket’s vocals finally to give the lyrics the treatment they deserved. “Take On Me”, despite now existing in a fifth version, sounded overwhelmingly fresh and new, and it’s a tribute to both the band and the label that they had the vision to stick with it; 25 years on, the song has lost nothing of its excitement and energy.

Nonetheless, one final hurdle got in the way of success; the band had been signed (and most enthusiastically supported) by Warner’s US contingent, a fact that irritated the UK branch to the point that they made little of the release, resulting in yet another flop. Undaunted, the US side promised that a video would be made to support the song , and it was this—Steve Barron’s now classic rotoscoped video—that ultimately brought the song, and the band, the attention they undoubtedly warranted. The video was wisely distributed three weeks before the song’s third release, garnering such excitement that “Take On Me” promptly went to no. 1 in the charts in both the UK and the US (as well as throughout Europe). 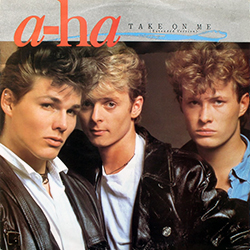 Once again, a 12-inch single was issued, this time with an “Extended Version” worthy of the name, adding a full minute to the song’s duration. The introduction is made very much more lengthy and imposing, drawing at first on the backing ‘ah’s from the chorus, underpinning them with heavy drums and covering them in synth glitter, all soaked in reverb; eventually, it kick starts the tempo, high-hats busying away frenetically in the background, leading to the song proper. Sensibly, the song isn’t altered too much; heavier percussion and a slightly more bullish bassline are the principal changes, sufficient to give the track a bit more punch. The only structural change affects the instrumental, teased out to about three times its original length, although its essential elements—beats, bass line, swirling synths, backing chords—are unchanged, simply juxtaposed in different combinations. The Extended Version is thrilling in its own right, sufficiently distinct from the original without becoming (as most remixes tend to be) a pale parody of it.

The 25-year legacy is important beyond the success of “Take On Me”; this is also the year in which a-ha will come to an end, the band deciding to call it a day once the current tour is complete. By way of celebration, their excellent first album Hunting High and Low was remastered and reissued a couple of months back, with a plethora of extra tracks, remixes and rarities. While the album contains many of the above versions of “Take On Me”, neither of the 12-inch versions are included; that’s not a problem with the poor 1984 version, but in the case of 1985’s Extended Version, it’s a serious oversight. To date, the only CD release it’s had is on the obscure Japan-only release “45 R.P.M. Club”, a disc well worth seeking out.

“Take On Me” is one of the most striking and memorable songs to have emerged from the mid-1980s, its freshness and vigour no doubt in part emanating from a-ha’s non-British origins. The fact that it’s as well-known and loved today as it was in 1985 is a testimony to the power of its immediacy and its uplifting happiness; there’s no doubt in my mind that “Take On Me” is one of the greatest pop songs ever made.

than you for this!
I'm touched.

I always had a sad fascination for the U.S.'s treatment of this band. Once the release of "Take On Me" ran its course, the U.S. record companies didn't really give them any mind. Much contributed to this abandonment, mostly the American's constant need for attention. Even Morten Harket made a comment about how "a-ha didn't have the energy to babysit the Americans." As an American myself I couldn't blame them. Sad to think this band created even greater works since and evolved into a respectable contributor to great pop music – and the U.S. basically missed out on it.