What makes Kenneth Kirschner’s “July 17, 2010” so significant—and, in my view, qualifies it as an ‘epic’—is the fact that its 2-hour duration is not subdivided into sections, or even particularly episodic (although its timbral qualities could be said to have a periodicity of roughly 20 minutes, but that’s just the way i hear it). This is what separates it from the plethora of large-scale albums that have been around for over 60 years, since the double album first came into existence. The prospect of an album lasting two hours or more is less problematic when its duration is broken down into individual songs of no more than a few minutes apiece; it’s still a lot to listen to, granted, but the time is compartmentalised, which does at least make things psychologically simpler. Of course, there will always be the concept album that seeks to be homogeneous, its constituent parts seamlessly working towards the creation of a larger whole, but the qualitative shifts en route—the movement from track to track, with their own internal structures—inevitably mean that the overarching narrative is partitioned, if not entirely broken. At the end of last year, in my summary of the best albums of 2010, one of the key things that impressed me about the winner—Chubby Wolf’s Ornitheology—was its large-scale epic structure; despite being merely a double album (and as such, shorter than many other such albums), it articulated itself in just two 40-minute tracks. The second ‘contemporary epic’ i’d like to highlight is very similar to this, and arguably more impressive. 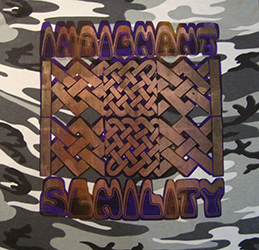 Pat Maherr is one of the most genuinely discombobulating composers i’ve ever encountered, whose apparent irreverence to music-making i’ll admit took some getting used to when i first encountered it. Nonetheless, under a plethora of pseudonyms, he’s responsible for some of the more fascinating music i’ve heard in the last few years, particularly 2004’s Too Mega, released as Moms Who Chop, as well as last year’s Plays Wagner, under Maherr’s best-known moniker, Indignant Senility. As that release writ suffocatingly large, there’s a hauntological aspect to Maherr’s work, while Moms Who Chop saw Maherr having a field day electronically annihilating acoustic instruments with a rawness worthy of Pierre Schaeffer himself; in yet another guise, as DJ Yo-Yo Dieting, Maherr explores his mischievous plunderphonic side, redolent of John Oswald. A few months ago saw the latest Indignant Senility album, Blemished Breasts, released on cassette, comprising two tracks each lasting a little under 50 minutes. 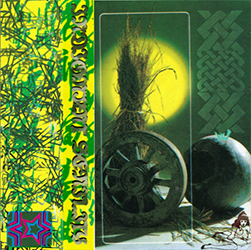 Plays Wagner touched on a hitherto underexplored depth and pensivity, and Blemished Breasts takes that very much further, even approaching the realm of ambient music. This is far from being hackneyed easy-listening, though; side A begins with the unsettling juxtaposition of deliciously radiant but distant music with the slowed down mutterings and laughter of a male voice. It’s a trait that persists throughout the piece, the most seemingly beautiful material allowed no closer than the periphery, casting an abstract glow on the middle- and foreground. The legacy of Plays Wagner exerts an influence on this first side; while most of the album avoids delineated sections, the music suddenly lurches into a hauntological episode (~8′), echoed in a more lengthy passage that emerges later (~32′), granulated piano chords struggling to be heard through their own ongoing disintegration. But much of the music defies easy description, Maherr constructing a complex sound collage that draws on acousmatic, electroacoustic, drone and noise, never pausing long enough to become clearly defined. That suggests a constant sense of motion, but on the contrary, the overriding mood projected here is one of stillness and beauty—embedded in the heart of something dense, perhaps, but essentially calm all the same. and also quiet; there are periods (e.g. ~20′) when Maherr keeps the music courageously soft for minutes on end, encouraging keen listening. The piano is the main foil on Side A, always dessicated as already described; indeed, its final appearance (~41′) causes the entire texture instantly to crumble, dissolving into the sounds of water that return at the end.

Side B could almost be said to take place underwater; its intensely muffled quality suggests the music is submerged. Maherr takes a different approach here, establishing a delicate friction between pitched material—granite-like, moving achingly slowly—and the filtered strains of assorted creature calls. The subtlety of this friction is supremely impressive, the co-existence of elements intimate; they swell together, gently pull at each other, yet neither aspires to dominate. This leads to some magical moments (e.g. ~14′) where their alignment results in music of remarkable beauty. Maherr maintains this fragile equilibrium for half the piece, until some rumbling bass seems to clear the air, and now the twin materials start to seep into each other. Noise becomes more significant in the latter half, causing the piece sharply to evolve in new ways, as in a striking episode (~35′) that eventually introduces percussive and metallic sounds, and an assertive deep pitch that seeks to become a drone. As on Side A, the final 10 minutes are critical to the work’s overall structure; here, a sudden band of high noise—the first occasion of higher frequencies in this piece—leads to an intense conclusion, featuring some of the most striking material on the album, including a wall of noise that comes to resemble a male chorus softly roaring (~44½’), followed by some amazing deep bass surges akin to whale calls.

Words don’t do justice to the incredible soundworld Maherr creates in these two pieces (which are best heard back to back); it’s not only gorgeous—and an infinitely more mature kind of beauty than one tends to encounter these days—but there’s also a palpable logic and coherence to the twin pieces’ sense of progression. Think of it as a ‘sonic bath’, perhaps, one that will leave you feeling transformed afterwards.

Blemished Breasts is available on cassette directly from Pat Maherr; details here. Alternatively, Maherr has generously made the album available to download free of charge via his mp3 archive website, here.