In the last few days i’ve highlighted some impressive examples of music composed on an ‘epic’ scale. i’ve saved the biggest until last, but even by saying that, i’ve touched on an inherent danger lurking in a discussion of this kind. When any musical parameter is taken to a compositional extreme, the mere act of doing that starts to rupture a work’s integrity, as much æsthetically as practically. Let’s put it another way; what interests me so much in a work like Robert Rich’s Somnium is both what he’s striving to do and the way in which he’s trying to do it. It’s a piece that requires its duration to be extreme, but it’s not a piece about duration; the danger is to put undue—or, worse, all—emphasis on that one aspect, and thereby fracture one’s holistic appreciation of the piece. One might argue, reasonably, that it’s difficult to ignore the durational aspect of a work lasting seven hours; but that’s not, hopefully, what one’s thinking about as each minute passes in Somnium—or, indeed, in the Trilogy in Three Parts, Blemished Breasts, or July 17, 2010. When setting out to explore these five ‘contemporary epics’, extended duration was my common thread, but i hope it’s been clear that that aspect is ultimately an integral component in a much larger and richer whole; in a nutshell, what these pieces share is that their extensive durations fully support and are at the service of the music.

There are musicians who’ve misjudged duration, and in their quest for something ‘epic’ have ended up with something rather different; the most conspicuous of late has been The Flaming Lips, who earlier this year unleashed a six-hour song, “I Found A Star On The Ground”, as part of their album Strobo Trip. Prior to its release, the group were interviewed relentlessly about this massive task, and it became immediately apparent that the duration was no unavoidable by-product of the song’s necessity, but rather was itself the focus of the endeavour; the challenge for the group was to find a way satisfactorily to fill that amount of time. Of course, from The Flaming Lips one expects a tongue-in-cheek approach to music-making, and in any case, the recording was made for charity, for which a marathon act of endurance seems appropriate and even admirable. But listening to the song, it takes almost no time at all to appreciate how awkward they found the task of filling six hours. In some ways, it reminded me of Natural Snow Buildings’ Daughter of Darkness (which also lasts six hours, although not continuously): ideas are either stretched way beyond what they can tolerate or passed by too quickly to register adequately. Thus, one becomes acutely aware of the duration, and that’s hardly the point of an ‘epic’. Apparently, The Flaming Lips will be releasing a 24-hour song in due course; my expectations are pretty low for that one. Beyond this, in creatively immature hands, things can really get out of control. Consider Bull of Heaven, for whom duration really has become a substitute for content. Their earliest experiments occupied durations of around 30-40 minutes, and there is the occasional nugget of interest in some of them; but before long they were making pieces 4 hours long, 8 hours, 12 hours…. Today, they’re creating pieces that supposedly last months and even years in duration (which, for obvious reasons, thwart pretty much all audio players, let alone hard drives). Trust me: don’t bother wasting your bandwidth, disk space or indeed your precious time with their thankfully unique kind of vapid gigantism, unless you really do fancy the prospect of a single idea repeating with minimal variation for the rest of the week; if you’re not in an asylum before you start listening, you may well be in one when you finish. 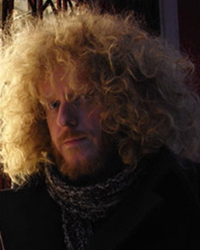 Anyway, so much for the caveats, none of which apply to the fifth and last ‘contemporary epic’ i’d like to examine. Leyland James Kirby has long been associated with—and has perhaps justifiably come to represent—the hauntological movement, his albums (usually under the pseudonym The Caretaker) bearing titles that imply an intense but unavoidably marred attempt to recapture the past, such as Selected Memories From The Haunted Ballroom (1999), Theoretically Pure Anterograde Amnesia (2005) and, more recently, under his own name, Sadly, The Future Is No Longer What It Was (2009). Each album burgeons with substance, and indeed, both in terms of concept as well as duration aspire to precisely the kind of ‘epic’ scale i’ve been exploring here (the second of those albums is almost four hours long); they’re a testament to a remarkable and unstoppable creative flow. Kirby is, put plainly, prolific almost to the point of absurdity; in fact, being absurd was once an essential part of Kirby’s mode of expression under a different moniker, V/Vm. V/Vm was, i believe, Kirby’s first nom de guerre, and over a period of 13 years, he discharged a colossal rage of music by that name, an unceasing torrent of occasionally effluvial works that repulsed and enchanted in equal measure. In 2006, Kirby made this statement, which neatly encapsulated his outlook, and laid out ambitious plans for a year-long project entitled V/Vm 365:

“Over the last ten years the music industry has changed beyond recognition from the one in which V/Vm started back in 1996. With V/Vm 365 I have taken into account all of these changes and am providing a direct link between creation and your own personal consumption of the audio I create. Each day I will be aiming to complete audio which will then be uploaded. I will do as much as my time allows me to do as I try to survive and work around this project. The aim is to provide a direct link removing the need to promote and distribute the audio I produce for one year. You will get the lot from the shit to the sublime. It’s a big challenge both mentally and financially and one for the last six months I have worked towards by learning enough things to make what is here as varied as i can. V/Vm 365 is not sponsored by any Arts waffling grants board of cunts.” 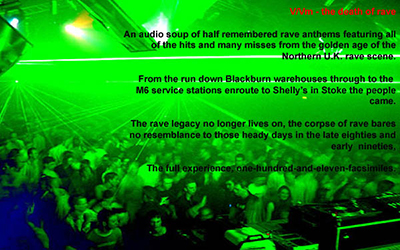 Kirby achieved his aim, and between July and September of that year gradually unveiled an album that is one of the most spellbinding epics of all: The Death of Rave. What makes it so special, so entirely captivating, is its synthesis of the compelling hauntology of The Caretaker with the relentless acidic energy of V/Vm. Actually ‘acidic’ is right—or, at least, acid; Kirby’s intention with The Death of Rave was to create “an audio soup of half remembered rave anthems featuring all of the hits and many misses from the golden age of the Northern U.K. rave scene. From the run down Blackburn warehouses through to the M6 service stations enroute to Shelly’s in Stoke the people came. The rave legacy no longer lives on, the corpse of rave bares no resemblance to those heady days in the late eighties and early nineties. The full experience, one-hundred-and-eleven-facsimiles.”

These 111 “facsimiles” are like a series of resurrected recollections, dream-like and caked in detritus. Some last barely two minutes, others persist for nearly a quarter of an hour, but as one passes to the next, to the next, to the next, there’s absolutely no attenuation or disruption of the ongoing argument; if anything, the focus becomes intensified. When i speak of an ‘argument’, i mean that loosely; these are the kind of pieces that can be listened to in any order, without harming the cogency of Kirby’s intentions. He’s seeking to garner memories, and such things do not come neatly packaged in a polite, preordained fashion. The pieces act as memento mori, capturing the essence of their deceased idiom with startling fidelity, wild energy and exhilaration cutting through the funereal context. They presumably communicate most to those, like i, who lived through the UK rave scene and can connect instantly to the vestiges of its legacy that resonate within; but they’re inspiring pieces in any case, and Kirby clearly found the experience so ripe with possibilities that, following the original 111, he created no fewer than 93 additional pieces, bringing the total to 204. The Death of Rave lasts 19 hours. It is a majestic, aching, quizzical, gruelling, delirious and affecting album—for me, it’s the ultimate ‘epic’.

Originally released in 20 parts, The Death of Rave was available until last year from Kirby’s extensive V/Vm archive website. It’s since been taken offline, but below (with Kirby’s blessing) are my own links to the complete album. You don’t need to download all the parts in order to unzip the files; each part is independent. For more information about The Death of Rave, the two Discogs pages—here and here—are succinct but informative, as is the page about V/Vm 365.

EDIT (Jan 2013): Links removed – Leyland Kirby has informed me that things are afoot; watch this space…

@breakbeatscientist You're very welcome – thanks for the kind words!

As a longtime fan of oldschool hardcore/rave/jungle/drum & bass etc and appreciator of ambient, leftfield electronica also. I stumbled accross 'The Death Of Rave' series a while back and downloaded part one. I have to say that I enjoyed the experimentation with drone-like noise combined with muffled pirate radio/live rave recordings. It conjured up the feeling of standing outside a nightclub back in 1992 and straining your ears in an attempt to catch snippets of music amongst a din of static.

I never managed to pick up any of the later releases due to the website disappearing, so many, many thanks for offering them here.

Thank you very much for uploading this. I didn't get the chance to get it when V/vm test was still online.

Thank you very much for this —- I haven't listened yet, but it sounds wonderful! (A bit of conceptual overlap with Zomby's 'Where were you in '92', but the scale and your description have certainly whetted my appetite!

Thanks also for the Dillon 9 Rivers — and so much more!

Haunted but undaunted, fading yet indefatigable: The Caretaker – Everywhere at the end of time – Stages 2 & 3 | 5:4

[…] echoes, consolidated the following year in his gigantic project The Death of Rave (about which i’ve written previously), a 19-hour “audio soup of half remembered rave anthems” that through its seemingly […]

[…] years ago, in a series of articles about ‘Contemporary Epics’, i wrote about The Death of Rave, Leyland Kirby‘s gargantuan paean to the world of rave culture. Originally released in 2006 […]