Navigating the sounds of the cosmos 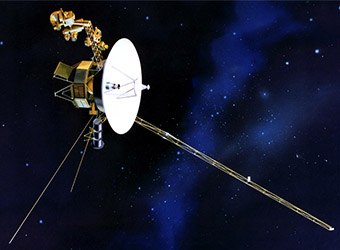 It’s been with no little excitement that i’ve watched the Curiosity Rover landing on Mars this week. Astronomy has been a back-burner interest of mine since i was a boy and, not surprisingly, i’ve been especially fond of the sound recordings produced by NASA from the data received by Voyagers I and II as they’ve travelled through and beyond the solar system. So i was intrigued last year to see an independent release of something called Voyager: Sounds of the Cosmos, a large-scale compilation of these NASA recordings, made available in three versions of increasing length, titled ‘Grand Tour Edition’, ‘Standard Edition’ and ‘Legacy Edition’ respectively. However, as i’ve spent more time with it, i couldn’t shake the feeling i’d heard these before, so i did some elementary investigating. It turns out – and the compiler, one Philip Graham (aka RazorEye), admits this on the Wikipedia page – that the compilation is a bootleg of earlier NASA releases, some of which are still readily available. However, new track titles have been invented and there’s also a bit of duplicity and misguidedness going on, so for the benefit of others who love these sounds as much as i do, i thought i’d just flag up the facts regarding this material, in order to make an informed choice possible.

The compilation draws on just two primary sources for all of its audio. One is the 5-hour, 11-CD series Nasa Voyager Space Sounds, originally released in 1990, and the other is the 2½-hour, 5-CD set Symphonies of the Planets, released in 1992. All of these albums were issued by new age practitioner Dr Jeffrey D. Thompson on his Brain/Mind Research label. The CDs have long been out of print, but in 2009 NASA reissued 10 of the 11 Nasa Voyager Space Sounds tracks as a digital download (confusingly with the words ‘Symphonies of the Planets’ on the cover!); the Symphonies of the Planets set has to date never been reissued. Anyone who has these albums can therefore ignore the Voyager: Sounds of the Cosmos compilation, as it contains exactly the same material.

i mentioned duplicity; in addition, some of the audio contained in the compilation pointlessly duplicates material heard elsewhere, presumably in the hope that, due to the nebulous nature of these sounds, no-one would notice. If that wasn’t ridiculous enough, the Wikipedia page (clearly written by the compiler himself), states “Most of the files were reduced of quality [sic] from multiple usage, and was restored to full recording quality using Audacity” – demonstrating lamentable ignorance about the nature of audio.

The compiler is, it seems, currently engaged in unleashing a third re-hash of this material, and the bungling way he’s been going about it can be witnessed in the recently-released ‘Grand Tour Edition’, some tracks of which were obviously purchased on iTunes, clearly showing the purchaser’s name and email address (there are ways and ways of putting out a bootleg, but this isn’t one of them). Anyway, below is a table showing the complete list of tracks from the second issue of the ‘Legacy Edition’, showing the origin of each track together with visual proof (click on the images to enlarge) – which also proves not one iota of remastering has been done – and below that, links to copies of all five original, out-of-print Symphonies of the Planets albums, all in far higher resolution than the execrable Voyager: Sounds of the Cosmos compilation. As for the remaining tracks, get the digital download; for sounds as wonderfully rich and detailed as these, you’ll be much better off. 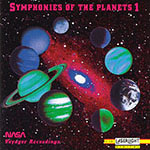 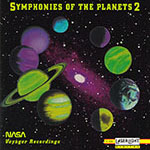 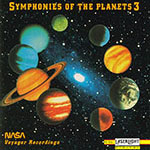 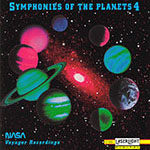 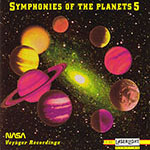 Has the compiler responded to this in any form? The Google Sites page is a collection of broken images and it appears the Wiki page was subject to some kind of low intensity edit war.

No – but i didn’t expect or want a response from them.

Understood. It appears that after your post, RazorEdits or whatever it is tried to get the Wiki page removed when all of these facts started being inserted into it. Or at least that’s my reading of the history.

Would any of you know where to find the original data used for this material?

Being collected by NASA I suppose it would be freely available for research? I looked a bit around, as I thought someone surely would have documented this and discussed it seen in relation to history and media. The thing is, transposing or time stretching a set of frequencies in one way or another – be it from one frequency domain to another within the audible region or not, almost always yields “science fiction like” out of space sounds, and this in quite unpredictable ways – even if the source material is as benign as the exhaustion pipe of your car.

But I couldn’t find any articles on this anywhere.

Thanks for your comment Mick. i’ve never been able to locate the original data either, so i can only assume that NASA has withdrawn the primary source, which is a shame. i’m going to make contact with them to see if i can find out anything – if i do, i’ll let you know.

Also, I’m curious to know if you could .rar these files up, for convinience

Unfortunately, those links have been dead since 2013. It’s possible to view some of the text via the Wayback Machine (https://web.archive.org/web/20150220171209/http://www-pw.physics.uiowa.edu/voyager/), but it doesn’t have an archive of the actual data.

Weird – they wouldn’t work for me yesterday at all. Well that’s great that the data is all available!

I’m curious, I’ve been looking into these trying to find more info… Did you make contact? THanks!

Thanks for the great info and links!

unimaginably enough, every FLAC copy on the web of these now out of print cd’s has a 5 to 4 ratio break on disk 5… the files should be 31 min and are instead 25, apparently due to a corrupted wav. header.. disk 5 in the corrupted shows ~72MB..

Thanks for this post with this incredibly hard to find info – this answered so many questions about these recordings for me. It’s been a nice introduction to your site, which is wonderful. I’ll also keep looking for that original data, and report back here if I ever find anything. Cheers.

Many thanks for the very kind words, TPT!

Thanks so much for these uploads and scans. As a previous poster mentioned, it’s so difficult to find these recordings anywhere, let alone finding them complete and uncorrupted.
You’ve made my entire month!

thanks for providing this incredible stuff!
I tried to get the tracklists of the other compilations 1,3,4,5..but it seems hard to get.
Is it possible to provide it also here? Maybe as image..?
Thanks!

..or maybe providing the “*.cue”-Files to split the *.flac in several tracks would be very helpful..

Hey man, I’ve been searching all over the web for more info on this and there’s not much out there. Do you know anything about these recordings being in Public Domain? Also, have you seen “Symphonies of the Planets” as a download on iTunes, or streaming on Spotify under the name “Timothy Drake” I can’t find any info on that guy either… Trying to figure out the authenticity… Thanks for the .flac’s by the way! I’m a musician/audio engineer, and discovering this project has been awesome!

Hi，
I‘m from China，and I‘m just so happy to find these，but the thing is I can’t download them，they seems dead already. it would be sooooooo great if you can upgrade them!

Hi Daisy, the links are alive and well, so the problem must be at your end.

I have the original run of 10 titles released in 1990, plus one of the Laser Light discs, and the way I read the liner notes, these are not a direct product of NASA, but something a guy named Dr. Jeffrey Thompson (Brain-Mind Research, subsequently Center for Neuroacoustic Research) made using Voyager probe telemetry data as source material. He doesn’t claim any sort of official partnership with NASA. He doesn’t reveal how he acquired the data, or in what form. He doesn’t provide a very robust explanation of how he translated the data into sound, nor reveal how much creative license he took in modifying the sounds. Certainly, the CD “Space Sounds Music” sounds like he took a pile of space noise and then used a bunch of notch filters centered on a traditional western musical scale to create a sort of “space organ”. Regardless of all this, most of these hours of dense noise are quite pleasant to my ears. An earlier post alleges some pitch shifting of the original data was done, but Dr. Thompson claims that there were electromagnetic waves picked up by the Voyagers which happened to correspond at least in part to the range of human hearing, and confesses to no pitch shifting. I could be wrong. I should go back and read the notes again. Thanks for the FLACs of the discs I didn’t have yet! Google Dr. Jeffrey Thompson and you’ll find he’s still selling the original 11 CDs (“Song of The Earth+ was put out under the newer company name in 1991), and a compilation disc, but nothing new in the space-probe-data-based arena. It’s all audio snake oil now, for all manner of afflictions and self improvements, but it probably sounds cool, too.

A complete collection of the original data formatted as mp3 audio can be found at http://www-pw.physics.uiowa.edu/voyager-audio.html

Wikipedia refers to this release in its article on Dark Ambient music:
“The Symphonies of the Planets series, a collection of works by Brain/Mind Research inspired by audible-frequency plasma waves recorded by the Voyager unmanned space probes, can also be considered an organic manifestation of dark ambient.”

From each one of the “Symphony of the Planets” works, is there a tracklist? or they’re only one about a 30-minutes?

Each of the Symphonies of the Planets discs is just a single track. You can see the details on Discogs.

This is insightful. While I knew where he (RazorEye) got the recordings from. I did not have the patience to download and work the original files myself. So I downloaded his multiple versions (Grand Tour, Legacy, etc). Over time he began to switch up the names and sadly in 2013 I lost all of my music due to my XHD crashing save for what was on my iPod.

Here I am in 2020 trying in vain to find the original track names and times so I can re-rename what I have when I stumbled upon your site.

Thanks for this Edward. i seriously hope ‘RazorEye’ gave up his inept attempts at putting this stuff out many years ago. Now you know where to go to get the proper recordings!