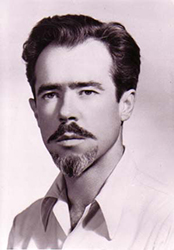 Today is the 100th anniverary of the birth of North America’s most singularly unorthodox composer, Conlon Nancarrow. Born in Arkansas but spending most of his life in Mexico, Nancarrow’s legacy is dominated by the large number of studies he composed for the player piano. His compositional practice was a punctilious and painstaking one, establishing the rhythms and pitches of the piece and then slowly punching them as holes into the roll of piano paper—perhaps the earliest example of a composer using a ‘program’ to create instrumental music (interestingly, Nancarrow’s first such study dates from the late 1940s, the same time that computer programming was becoming a practical reality). Barely acknowledged until the last twenty years of his life, Nancarrow’s work eventually became recognised for what it is: a dazzling and entirely unique enigma, as well as the most thoroughgoing and fundamental re-evaluation and re-thinking of counterpoint since the time of J. S. Bach.

Not surprisingly, many if not most of the player piano studies go way beyond the abilities of any human performer to reproduce, but the pianist Yvar Mikhashoff arranged several of the studies for larger instrumental forces. To celebrate Nancarrow’s centenary, then, here is a performance of one of those arrangements, his Study No. 7, which dates from between 1948 and 1960. The longest of his early studies, Study No. 7 is particularly interesting due to the clarity of the lines (which almost comes across as a concession to the listener) despite the fact that it contains bewilderingly layered complexity. It’s one of a number of studies in which Nancarrow explored isorhythm, the scheme found in motets from the late mediæval and early renaissance period, where repeating but non-equal sequences of durations and pitches were used to create lengthy passages of familiar but ever-changing material. In Study No. 7, Nancarrow uses three isorhythms (lasting 18, 24 and 30 beats respectively, equivalent to a ratio of 3:4:5), and they’re often left to play out for lengthy periods. Overall, although it would be stretching a point to describe it as a ‘sonata’, the study feels akin to the exposition, development and recapitulation of sonata form, so perhaps Nancarrow was seeking to allude to that too, in which case Study No. 7 would then encompass elements of Early, Baroque and Classical idioms. However you look at it, stylistically speaking Study No. 7 is wonderfully oddball, incorporating wildly frantic melodies, relentless walking basslines, and strong hints of both blues and boogie-woogie. Mikhashoff’s orchestration draws comparisons with neo-Classical Stravinsky, but the counterpoint is kept crystal clear, regularly passed from voice to voice so as to demarcate the shifts in the underlying processes.

This performance was given by the London Sinfonietta conducted by Stefan Asbury.

By way of comparison, the original player piano version can be heard below, in conjunction with a brilliant visualisation of the music created in 2007 by artist Sophie Clements.