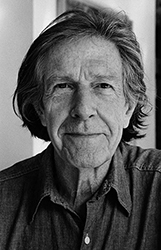 In addition to intimacy, the string quartet is a medium capable of remarkable levels of austerity. It’s no surprise, then, that John Cage turned to the quartet as the vehicle for a work in which, “without actually using silence, I should like to praise it” (as Cage wrote to his parents, prior to starting the piece). A few years earlier, in 1947, Cage had composed his first orchestral work, The Seasons, using a technique that he described as a ‘gamut’. This involved the pre-composition of a collection of materials—chords, gestures, solitary sonic moments—that had no relation to each other. These would then become the entire repertoire for the compositional act, Cage choosing from this collection of materials as the mood took him. The gamut technique was an important step towards the aleatoric methods Cage would explore in the next stage of his output, and it’s heard with perhaps the greatest clarity in the work he wrote next, the String Quartet in Four Parts, composed in 1950. Here, Cage created a library of chords, and then a melodic line; to harmonise this melody, Cage called upon whichever chords supported the melody’s current pitch (the same chords always fixed to the same pitches). In addition to use of the gamut, the work also draws on the seasons for inspiration, being in four movements each of which is dedicated to one season. The reference to silence in the above quotation is arguably as much about motion as the actual presence or otherwise of sound itself. Indeed, the titles of the first three movements indicate a gradual tendency towards motionlessness: ‘Quietly Flowing Along’ (summer), ‘Slowly Rocking’ (autumn), ‘Nearly Stationary’ (winter). But another kind of silence evoked in the work is that of self-expression. By drastically restricting the composer’s palette to a small pool of disjunct fragments, the gamut technique to no little extent confounds most conventions of what might otherwise pass for “expression”. This is mirrored in an instruction to the players that they not only avoid vibrato but use minimal weight on the bow, resulting in a cool, detached, rather other-worldly sound, often sounding poised to evaporate.

Yet the music is very far indeed from expressionless; on the contrary, the unrelenting flat demeanour of the quartet demonstrates surprising emotional capacity. The first movement is tantalisingly allusive, initially giving the impression (as in Jörg Widmann’s Second Quartet) that something very familiar is hovering at the fringes of perception. But that sense lasts barely a few seconds, brushed aside in the movement’s central occupation, the four players wanting to move together at an icy distance from the listener. As if by magic the music keeps falling into cadential moments, briefly conjuring the spectre of a viol consort. But it’s the musical equivalent of a trick of the light, and it becomes an increasingly distant memory through the second movement, on the one hand growing more tranquil yet shot through with unexpectedly harsh accented chords that scar the milder texture beneath. The lengthy third movement presents a music that by now seemingly wants to hibernate. The chord progressions have slowed almost to a stop, and even calling them “progressions” is false, as they idly rotate around a common central point. However, the way Cage renders the gamut here gradually makes the quartet seem more deliberate, more active, as though something is being attempted even while the players—to switch metaphors—are practically turning to stone (or should that be ice?). The presence of pizzicato notes—the first appearance of a non-bowed, percussive element—to some extent breaks the spell, and the movement ultimately becomes intensely focused almost entirely on harmony and the juxtaposition of its chordal elements, sounding like an experiment in progress. Perhaps due to the subtle changes wrought here, the short, vernal fourth movement, labelled ‘Quodlibet‘, is faster and more obviously melodious, drawing heavily on the allusions only touched upon at the start. It builds on the apparent introduction of conscious purpose in the preceding movement, at the last becoming boisterous and forceful.

Soon after writing the String Quartet in Four Parts, Cage embraced chance techniques wholeheartedly, which makes the work’s rather mesmeric wandering around the thresholds of active intent all the more fascinating.