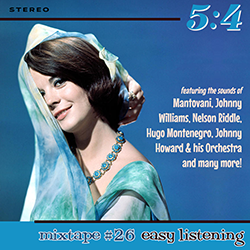 For the new 5:4 mixtape i’ve opted for something a little different. i don’t tend to have musical ‘guilty pleasures’ as such, but one of my passions that i rarely talk about is for the plethora of easy listening LPs that were released in abundance during the 1960s and early ’70s. To an extent they were a development from the assortment of effervescent idioms that had exploded in popularity through the 1950s, particularly the Afro-Cuban and Brazilian dances such as the bossa nova, rumba and salsa, but jazz—including mild use of scat—was also central to the easy listening scene, along with instrumental versions of popular hits. Far more sophisticated and imaginative than the relatively restrained parallel ‘beautiful music’ genre that was eventually so heavily promulgated by the Muzak corporation, the similarities nonetheless meant that easy listening unavoidably become intertwined with ‘elevator music’. For this and for other reasons, easy listening has often been judged rather harshly, and it’s true that, charges of commercial exploitation aside, it is music very much of its time, not all of which has aged well. Even i can’t really listen to it without being instantly transported back to the late 1970s when my parents would fill their respective houses with the strains of Herb Alpert, Bert Kaempfert, Mantovani, et al. Yet while nostalgia no doubt plays a part in my love of this music, above all i adore the way it vividly captures the slick, lounging sophistication and late-night sleazy dreaminess that seems so quintessential of the time. The standard of the arrangements, too, was often outstanding, a quality easily overlooked when the genre is dismissed out of hand.

In choosing a selection for this mixtape, i’ve selected personal favourites that i think typify the guts and the glory of easy listening (with a couple of more Muzak-related numbers thrown in). Almost all of them are vinyl rips, but only in a couple of places have i cleaned up the audio, as to do otherwise would be to lose something vital. i don’t expect the names will be familiar to anyone with less than a passing interest in the genre, but Mantovani and Nelson Riddle should stand out (Riddle remains one of the finest arrangers of the 20th century; if you’ve listened to much Sinatra, you’ve heard his work); i had to include the great Hugo Montenegro as well—everything he touched seemed to turn to gold—and if the name Johnny Williams doesn’t immediately ring bells, this was before he met up with Spielberg and became the most significant film composer since cinema began. Another composer of soundtracks, David Whitaker, who died last year, is represented by a track with one of the most gorgeous introductions of the genre. i’ve also included a couple of contemporary pastiches by Jerry Martin and Marc Russo, composed as part of the marvellous soundtrack to the computer game The Sims.

In all, just over an hour of music, best heard late at night with the lights low while sipping on a Blue Hawaii. Below is the tracklisting in full—and if this mix whets your appetite, you could do a lot worse then head over to the superb In-Flight Entertainment blog, where lovingly-made rips of many of these otherwise unavailable albums can be found.

Thanks for the plug! What a wonderful site. I’ll add a link from I-FE.

[…] not one that i get a chance to discuss on 5:4 very often (the one exception to date being my 26th mixtape devoted to Easy Listening, though as i was focusing particularly on the late ’60s/early […]