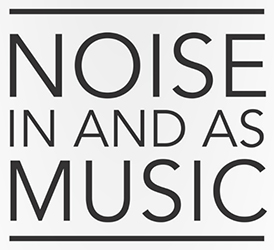 “We like to give you the maximum, from which you can subtract.” Aaron Einbond’s closing words before the first concert at the Noise In And As Music conference, organised by Einbond and Aaron Cassidy, which took place at Huddersfield University’s Centre for Research in New Music (CeReNeM) last weekend. Einbond’s amusing reference to volume (and the audience’s option for ear-plugs) crystallised the essence of the conference’s focus and the host of assumptions one tends to make about it. What, after all, is noise? Does it—should it—connote material that is extremely loud? extremely dense? extremely extreme? The conference’s three days of papers, discussions, installations and concerts went no small way to addressing these fundamental questions.

The range of opinions, methodologies and implementations of what may or may not be ‘noise’ was almost bewilderingly broad and multi-faceted. In keeping with each and every conceit of genre, noise too has its share of charlatans, wannabes and hangers-on, and the weekend occasionally dipped its toe into examples of thought and sound that seemed either to miss the point or just sap all the interest out of it. But such moments were happily rare; not only were the majority of contributions fascinating and very thought-provoking, the best were stunning examples of what noise can be and can do, examples that changed, expanded and even redefined one’s understanding not only of what we were hearing, but of hearing itself; repeatedly and equally, both sound and sensation found themselves under the microscope.

Among the brightest of the highlights was Peter Ablinger, who turned a keynote lecture into a triptych of challenging sonic encounters that effortlessly intermingled music, noise, field recordings, speech and performance art as only he can. Witnessing Ablinger speak while a shifting assortment of bandwidths (all derived from the qualities of Ablinger’s own voice) obscured different elements of his voice was surprisingly hypnotic, one’s focus constantly pulled back and forth between straining for meaning and simply enjoying the curious effects brought about by the collision. It was one of many manifestations throughout the weekend of projective listening—the brain/ear imposing on noise what it thinks it’s hearing but isn’t.

An even stronger example of this, and the work by which i was most deeply impressed during the weekend, was Marko Ciciliani‘s epic Pop Wall Alphabet. Ciciliani is interested in what constitutes ‘the sound’ within the commercial context of popular music idioms. This is explored via a series of 26 studies, each focusing on an album by a pop artist (in alphabetical order, the letter corresponding to the name of the artist); each study falls into two parts, the first of which superimposes all the tracks from that album on top of each other, so that they are heard simultaneously. At first extremely dense, the accumulation of sound gradually becomes more transparent as the structural variety of each track progresses and, more noticeably, as they each come to an end, thinning out the texture. When just one track remains, the second part of the study begins, comprising a sequence of what Ciciliani calls ‘spectral freezes’, each individual track reduced to its essence—in terms of frequencies and amplitude changes—in a wonderfully paradoxical slab of static, seemingly full of activity yet motionless. These ‘freezes’ follow in succession, moving around the space, at which point the study ends and, after a short pause and a succinct announcement from Ciciliani—”Letter J: Michael Jackson, 1982″—the next study begins. It takes four-and-a-half hours for the work to move through its 26 studies; i was able to stay for about a third of that, but wish i could have stayed longer. It’s an intoxicating work, each study captivating in its unique trajectory through music deliberately chosen for its network of emotional connections and history. In this respect, it’s true to say that it’s not just the performance space that resonates as Pop Wall Alphabet plays out; hearing albums such as Michael Jackson’s Thriller, Kraftwerk’s Radioactivity and Queen’s A Night at the Opera scrutinised and exposed in this way causes one’s long-standing personal associations and memories to vibrate forcefully against the sheer walls, shuddering bass and intricate strands of filigree. and if that suggests that the experience of listening to Pop Wall Alphabet is extremely complex, it is, but quite apart from that, it’s also often remarkably (and perhaps surprisingly) beautiful. As yet, the cycle isn’t available (Ciciliani told me a book/audio release is forthcoming), but letter G (Lady Gaga, The Fame Monster) can be heard below and letter M (Madonna, Ray of Light) on SoundCloud.

Beyond the twin dazzlements of Ablinger and Ciciliani, it would take too long to recount the best of the rest—including Phil Julian‘s opening night improvisation, Ryoko Akama‘s vibrating water piece RADIAT GC, Mark Summers‘ ferocious Laminate for viola da gamba and electronics and Yota Morimoto‘s audiovisual transnd.xy (perfect for raster-noton nuts)—but i can’t fail to mention the conference’s final speaker, James Whitehead, a minor hero of mine. A self-styled “noise theoritician”, Whitehead’s exploration of noise goes way beyond mere sonics into the realm of conceptual ideas and metaphysical realities. Under the nom de guerre JLIAT, Whitehead has been exploring the possibilities of noise and non-music for nearly 20 years, through works that are beautiful, frivolous, confounding, impossible, ridiculous, but never pointless—in fact they almost always pack a hefty sting in their tail. Whitehead’s 30-minute talk could have done with being three times as long; in a way, the title of his paper managed both to encapsulate and undermine everything we had heard and discussed through the previous three days: ‘Un-sounding music; noise is not sound’.

Noise has needed—in fact, constantly needs—a fresh reappraisal, and Huddersfield deserves major kudos for committing so much time and energy to opening up the discussion in this way. The conference’s considerations have been complemented and extended in a marvellous accompanying book, including essays by (among others) Peter Ablinger, Aaron Cassidy, Marko Ciciliani, Aaron Einbond, Phil Julian, Joan Arnau Pàmies, and James Whitehead, plus an assortment of mini-interviews. The contents of the book can be seen here, the book itself can be downloaded in PDF format here, or you can buy it here.

[…] Many thanks to Simon Cummings for his detailed listening and commentary on last weekend’s symposium: The Rest Isn’t Noise | 5:4. […]

[…] through a process that randomises the sound data of each track (a better description can be read in my original review). The results are astounding, a cross between a scientific analysis and a new kind of sound art, in […]