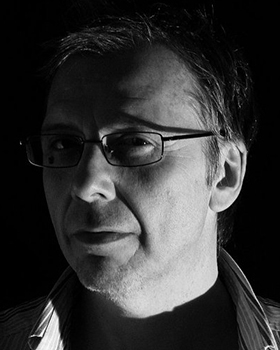 i learned a few minutes ago that one of my PhD colleagues at the Birmingham Conservatoire, composer Stuart Stevens, has died of a heart attack. From a personal perspective, this is obviously extremely sad news; PhDs can be strange, remote, disheartening and somewhat alienating beasts, and Stuart was someone who was able consistently to inject huge amounts of lightness and hilarity, leaving one feeling not just cheered but remarkably encouraged. In the last few years, as he was based in Suffolk my encounters with Stuart were more occasional and fleeting—i think the last time was a chance crossing paths at an HCMF concert at Huddersfield Town Hall—and i only wish we’d had a lot more time and opportunities to talk. From a wider perspective, Stuart’s passing is a real loss; his primary area of interest was in exploring new articulations (what he referred to as the “emancipation”) of microtonality, to some extent building on the legacy of Harry Partch but equally trying to forge a new outlook on an area that remains at the fringes of contemporary musical development. His energy and enthusiasm for the subject were utterly convincing and contagious, every conversation peppered with extensive descriptions of the methods and devices he had been exploring or was intending to utilise in future projects. Some of Stuart’s music can be found on his YouTube channel, while his website has further audio examples plus extensive information about his work with microtonality.

Stuart Stevens’ entire attitude to composition was one of the most admirable and inspiring i’ve ever come across, and it’s a really terrible shame that he’s no longer with us. My most heartfelt condolences go out to his partner Gordon; Stuart will be very deeply missed.