Portrait concerts are rarely so eye-opening or indeed eye-popping as BCMG’s for the composer Benedict Mason given at the CBSO Centre on Sunday evening. The point of such concerts is obvious, but it’s hard in hindsight to determine whether or to what extent this one really demonstrated a coherent idea of its subject. In some respects, they hadn’t made this an easy objective, featuring just two works by Mason bookending music by Charles Ives.

The first, Nodding Trilliums & Curve-Lined Angles, a work commissioned and premièred by BCMG in 1990, and directed on this occasion by Ilan Volkov, has timbre as an overriding concern. The six movements are both characterised by and named after the respective sources that dominate them: Xylophones, Rattles, Drums, Toys, Claves, Vibraphone. They act a bit like windows opening out onto vividly depicted, self-contained worlds, and despite their generally conservative character, with echoes of Stravinsky here and there, these worlds are convincing and enticing. By turns one encounters exhilaratingly motoric jollification; ticklish music pieced together from an array of nervous tics; terminally unstable music that, due either to ineptitude or inebriation, keeps falling over; an apparent sunrise over an impossible zoo, the gentle, mellifluous context of the former filled with strange ululations, calls and whistles of the latter; an exercise in engineered misalignment, triggered and exacerbated by the four percussionists walking around the space like politicians clamouring for support, advocating wildly different policies on tempo; and finally a place of the purest magic, where everything has turned to liquid, dripping, flowing, splashing and glinting as its music sloshed around the space, coloured by the work’s most complex harmonic palette.

In the best sense of both words, Nodding Trilliums & Curve-Lined Angles is both fun and serious, a difficult balance to achieve and one that also permeates Charles Ives‘ Piano Trio, which Mason had chosen to sit alongside his music. Completed in 1910 and revised a few years later, its connections to Mason’s music were clear. The opening Moderato‘s tenuous connective tissue, where both interaction and alignment are often fundamentally questionable, was the most immediate, but more far-reaching was the strange middle movement Ives titled ‘TSIAJ’, an acronym for ‘this scherzo is a joke’. Like a kind of mash-up of Shostakovich and Milhaud (yet, of course, pre-dating both), it is superficially amusing, yet it becomes increasingly clear (building on the tone of the preceding movement) that this particular fantasia, although delirious, is far from irreverent. Despite that title, Ives, in fact, clearly takes very seriously the collection of somewhat ill-fitting tunes he brings together here, treating them to outlandish development and juxtaposition but never in a way that seems absurd or even especially tongue-in-cheek. It’s a lack of irony that enables it to act both as a continuation of and diversion from the work’s overall lyrical thrust, which displays surprising sobriety. The closing movement, the most substantial and intense of them all, clarifies further Ives reverence in a litany of never-ending lines, serious, earnest and above all emotionally potent. It’s easy to regard Ives, as so many do, as a composer forever indulging in little more than mere play; the Piano Trio is a powerful corrective to that misconception. 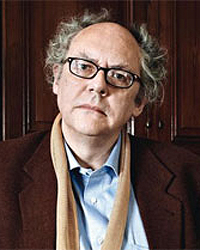 And is it, perhaps, a corrective that Benedict Mason would also like to reinforce regarding himself? Maybe this, above all, is what Mason wanted to be circling our thoughts during the highlight of the concert, the world première of his Horns Strings and Harmony. If so, it was a wise precaution. Composers, in general, tend to think “what?”, performers “how?” and audiences (especially of new music) “why?”. This last question recurred again and again throughout the 35 minutes of the work’s duration, during which the members of BCMG were positioned in and moved liberally throughout the various surrounding corridors and balconies in addition to the main performance space (the audience sat in the round). Its demeanour is akin to a kind of speed dating of musical ideas and behaviours of varying tenacity and temerity. Among the more striking: distant muted brass chords, coloured with some lovely distortions; even more distant high repeated piano notes with low double bass pizzicati; groups of six clustered around Steinways not so much playing as manipulating sound from them; the weirdest tutti in the world, over three vertical levels, six-hand piano clusters on the ground, iron bars striking the support railing higher up, with loud brass staccati emanating from the gods; percussionists rolling wooden balls across the floor; the CBSO Centre’s screens all being lowered in succession, resulting in both a wonderful sound and a significant blast of cool air; a swinging pendulum surrounded by players tapping pebbles as it passed them; and bassist John Tattersdill bowing the longest string in history, suspended from the top gallery down to the strings on one of the pianos. In Nodding Trilliums & Curve-Lined Angles, theatre had felt like a lurking presence that only once really broke free; here, as in most of Mason’s work of recent times, theatre is part and parcel, music not so much played within a space as played as an integral part of that space. But if the modus operandi is clear, what of the raison d’être? Or, to reiterate the audience’s key question: why? This was very much less easy to resolve: certainly, although Horns Strings and Harmony develops a cogent and consistent manner of delivery, it doesn’t attain anything approaching a coherent sense of connectivity. Maybe these fleeting glimpses of behaviour are acting in a similar way to those in Nodding Trilliums — less like ‘windows’ here than brief ‘happenings’  — and as such should be encountered on their own terms without seeking to forge or fabricate links between them (there weren’t overt connections between the movements in Nodding Trilliums either, not that it mattered). It’s tempting in situations like this, confronted with such a breadth of brazen theatrical imagination (not unlike that of Simon Steen-Andersen) to focus entirely on the surface, on the novelty, on the Newton’s cradles and singing bowls and tennis balls and descending wooden woodpeckers and ebows and footballs and everything else that was bowed, struck, thrown, rolled, blown through or wielded during Horns Strings and Harmony. In short, on the paraphernalia. But didn’t Nodding Trilliums and the Ives Piano Trio specifically indicate that this attitude would be, at least in part, to miss the point? The fun was obvious, but what lay beneath it was harder to find. Perhaps the surface was just so playfully ornate that it simply couldn’t break through.