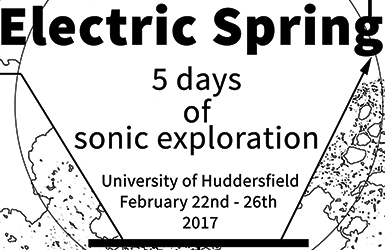 i was fortunate to catch four-fifths of last week’s Electric Spring festival, Huddersfield University’s annual exploration and celebration of things electronically musical. As usual, attention was focused on a daily evening concert, featuring a substantial programme preceded by one or more relatively brief opening acts. The festival’s emphasis on electronic music felt conspicuously different this year; the connection seemed pretty tenuous in Thursday’s concert showcasing three films (admittedly all including electronically-created or -processed music to some extent, and the event was a tie-in for the university’s Sound and Music in Documentary Film symposium, which was taking place at the same time), as well as drummer Dave Smith’s Saturday gig, which employed little in the way of electronics beyond a few loops, some reverb and a modicum of pitch-shifting. i mention this more as an observation than a complaint: the concerts were no less enjoyable for their relatively minor use of electronics, but it’s fair to say that these two events, in retrospect, seemed more like vanity projects for the particular members of staff who organised them than deeply meaningful contributions to Electric Spring’s general ethos. Or maybe Electric Spring is going somewhere else in future; i guess we’ll see.

i was seriously disappointed to miss the final concert with Richard Scott (Sunday evenings aren’t particularly convenient for long-distance attendees), as i suspect it may well have proved to be a highlight of the festival, but there were decidedly rich pickings to be found on the four days i was there. Dave Smith‘s aforementioned performance, unfortunately, wasn’t one of them; a first stab at improvisation felt immediately uncomfortable, Smith visibly uncertain of where to take it, and it was something of a relief when he gave up after a few minutes. His second, much longer, attempt was more convincing, growing in confidence as it grew in complexity and scale, but its success was disappointingly peacemeal. However, it was sheer genius compared to what had come before: Simulacra Studies, a work by Solomiya Moroz for a gesticulating pianist using haptic controllers and incorporating video that ranks as one of the most vapid, inept and downright wretched ‘compositions’ i have ever witnessed. Visually, it was by turns ridiculous and incomprehensible, and aurally, groin-punchingly arbitrary and inconsequential. Conversations later that evening revealed i wasn’t the only one to have been fuming in my seat. 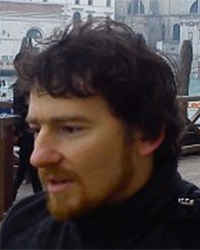 But the rest was more or less a continual stream of delights. The relationship between sight and sound was explored on the opening night by both Tadej Droljc and Alex McLean. McLean’s live coding improvisation wasn’t exactly enhanced by the large projection of his laptop screen (at best a distraction, at worst somewhat narcissistic), but with eyes shut his loop-driven material attained some pretty enjoyable heights. Getting to these sonic summits felt laborious, but once we were there, it seemed worth it. Droljc (a Huddersfield PhD student) presented Capillaries Capillaries, a hypnotic audio-visual piece that brought to mind the work of Ryoji Ikeda, with monochrome CGI dots, lines, geometric shapes and amorphous clouds, the movement of which is a direct response to the noise being fed into them, resulting in what Droljc accurately calls “a tangle of audiovisual interactions”. It’s not a particularly new paradigm, but as manifested in this piece it proved hypnotic and often stunningly beautiful. The play of opposites – between nebulosity and fixed geometry, small notes/lines and large constellations, sustained pitches and hard percussive elements, and between aspects of stasis and rapid/regular activity – was engrossing, constantly displaying a sense of underlying physicality, and its imaginative range was substantial. Very impressive. 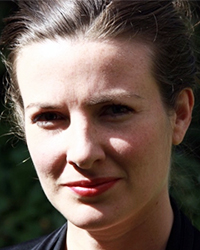 Thursday culminated in Mirror Lands, a film by Emma Dove & Mark Lyken that is a 70-minute portrait of Scotland’s Black Isle (Dove’s place of birth). The duo’s primary concern is an interest in ‘unseen’ and/or small-scale narratives that tend to go unnoticed, presented via a series of long-shots that invite interpretation from the viewer. There’s much beauty to be found in this piece, its long shots rather movingly bestowing importance on otherwise irrelevant happenings, including a gloriously absurd gaze at a sheep within a ruined building that is clearly caught at an uncomfortable cusp between courage and fear. These long shots, combined with the use of a static camera (only moving if the surface it was upon was also moving) lent the film – and thereby us, the audience – an uncanny kind of omnipresence, interestingly tinged with melancholy as this was tempered by the fact that one felt somewhat trapped on the peninsula, watching mutely as visitors arrived and departed, creating an unusual but most effective mix of emotions. The music lets the film down, a series of spurious intrusions that rarely do anything to complement the visual language – due in part to their hackneyed mode of expression, which undermines the authenticity that pervades everything else – but it couldn’t prevent Mirror Lands from conveying a profound sense of love at these anonymous occurrences playing out in a decidedly remote place. The two short films that preceded it were even more powerful. Geoff Cox & Keith Marley‘s Mill Study turned a Yorkshire textile mill into a wondrous ballet of mechanical movement that at times proved intimidating considering the size and speed (and apparent unstoppability) of some of the machinery. But for me the real highlight of the evening (and perhaps of the whole festival) was Demelza Kooij & Lars Koens‘ Graminoids, a short black and white study of Arthur’s Seat in Edinburgh. The visuals concentrate obsessively on the effect of wind and air currents moving through fields of grass, a stream of ever-changing unseen forces causing spirals, threads, waves, cycles and other patterns as well as arbitrary twists and sharp bends. The monochrome film found a parallel in the use of just treble and bass registers for the music, which blurred the distinction between natural and artificial sound, clarified occasionally in close-up shots with exquisite moments of music that seemed to emerge directly from a vibrating head of grass. One of the film’s most memorable images was when it abruptly, and briefly, switched away to a seemingly static shot of trees from above, their long shadows giving the impression that they were gazing directly at the sun. It was an amazing, breathtaking moment; Kooij & Koen are a pair to keep a close eye on. 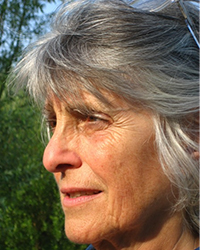 Arguably the most well-known figure at the festival was Argentine composer Beatriz Ferreyra, whose work is closely associated with INA-GRM, the group established by Pierre Schaeffer in 1958. New music concert organisers’ indefensible preoccupation with music by young composers was blown to smithereens by Ferreyra (who turns 80 later this year). Her energy and enthusiasm in the pre-concert talk was infectious; discussing the fact that she still only works with tape, and seeing her eyes light up and her whole body become animated at the sheer pleasure of the physicality of the medium, it was tempting to throw away the laptop, grab a razor blade and immediately start cutting and splicing. Ferreyra also only works with real-world sounds, nothing synthetic, though this fact – as well as the music’s tape origins – were often forgotten in the trio of pieces presented on Friday evening. The first two, in hindsight, were like warm-up stretches: Río de los pájaros azules (The blue birds’ river) deconstructed whistling calls into an insect-like texture that grew progressively softer, while Echos is a fascinating vocal study, exploring the melodic possibilities of a collection of four Latin-American songs, along the way fragmenting into rhythmic dance episodes. The unexpected conclusion was cheeky and charming, singer Mercedes Cornu breaking out into laughter. But the main event was the first UK performance of Ferreyra’s new 30-minute work for 16 channel + stereo, Senderos de luz y sombras (Paths of shadows and light), premièred last month in Paris. This was the very epitome of acousmatic music, its sounds continually positioned at the liminal point between recognition and inscrutability, causing associations to become abstracted, the sounds continually slipping through our metaphorical fingers. Perhaps due to working with tape, the treatment of the sounds at times sounded somewhat crude, but – and this is no apologia – it was a genuinely refreshing change from both the ultra-cleanliness and generic demeanour that typify so much contemporary electronic music. Her use of silence, too, was especially effective; before the concert she spoke of silence as being the points where “the music breathes”; more than this, these occasions felt as though the piece was adjusting, composing itself (no pun intended) before continuing, and alongside these silences, the many episodes where Ferreyra wielded her materials extremely quietly enhanced one’s involvement with the music still further. So often composers resort to vast sonic pile-ups and overblown dynamics to convey scale. But here, hearing sounds whisper and barely brush against the space of Phipps Hall, made it seem as though we were examining the microscopic surface of the music; relative to us, in these moments Ferreyra’s music became infinitely vast.

I attended the very Richard Scott gig you missed, Simon, so can help out to a degree. First off, Elias Merino’s “warm-up act” was definitely missable – essentially, let’s fill one audio channel with some electronic chatter, loop it a bit, repeat ad nauseam in random other channels, then finish with a washed-out facsimile of Autechre for no apparent reason.

As for the Scott, obviously nothing can replicate the moment-by-moment thrill of improvisation in action, but hopefully the following will give you a flavour of the kinds of thing that were going on…

Thanks for filling in the blanks, Chris. The link you included: was Richard Scott playing some pieces from that particular album? i know Scott’s own Bandcamp site and wondered if any of the pieces played were on one or more of the compilations on there. And if you haven’t checked out his work as part of Grutronic, i highly recommend it.

Thanks for the recommendation! I’d say that Scott’s improvisation was a kind of reimagining of Several Circles (it was shorter, for starters) – taking a lot of the same sounds, and even some of the same sequences, but then managing to craft something new and fresh out of them.

I’m also glad I had what sounds like a lucky escape – I nearly opted to go on Saturday night, not Sunday!

Lucky indeed. Though i’ve found myself often thinking again about Dave Smith’s performance, and how fascinating it is that even for an experienced improviser, things can go absolutely wrong and somehow nothing jells. It felt more disappointing as P. A. Tremblay had bigged Smith up massively in the pre-concert talk, so there was a distinct sense of crest-fallen-ness pervading after the brief and noticeably muted applause had subsided…

i guess the cliché remains true: “don’t believe the hype”.

I disagree about Elias Merino’s piece – I enjoyed the sounds and particularly liked the ending. It was an idiosyncratic work that didn’t pander to the usual e/a norms and for that it was most welcome.

Good! I’m glad that you found something in it that I missed – it’s so much nicer when one does.

“…but it’s fair to say that these two events, in retrospect, seemed more like vanity projects for the particular members of staff who organised them…” this characterises much of what is taking place artistically in various academic institutions, it’s state funded backscratchery that generally couldn’t give two f***s about trying to connect with a wider audience – lines on a CV, tick those boxes, fulfill those career progression requirements.