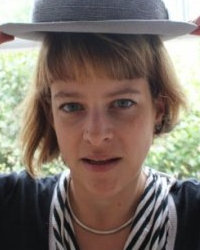 i’m ending this year’s Lent series with a beautifully weird little piece by USA-born, UK-based composer Amber Priestley. The work takes its title – floors are flowers — take a few – from an equally short poem by US poet Shel Silverstein, ‘Enter This Deserted House’:

But please walk softly as you do.
Frogs dwell here and crickets too.

Ain’t no ceiling, only blue.
Jays dwell here and sunbeams too.

Floors are flowers – take a few
Ferns grow here and daisies too.

And my child, I thought you knew
I dwell here… and so do you.

Priestley’s piece, composed for undefined forces, uses that phrase four times as a refrain, each time to be performed according to one of the four temperaments. Betwixt the refrains are three passages that require an alternative approach to timbre, but which, most importantly, should be performed without expression (the title phrase is not used in these passages). The musical material itself is semi-indeterminate, inasmuch as the pages can be turned upside down (see left), the performers choosing a random line of music for each of the seven sections. 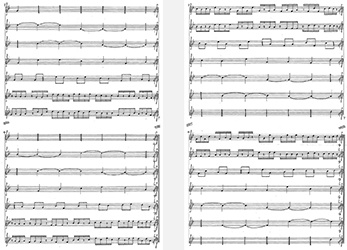 In this performance of floors are flowers — take a few, given by members of EXAUDI at the 2014 Tectonics festival in Glasgow, variety of articulation is what’s projected most. The four refrains are like rather wonderful caricatures: lively and garrulous (presumably sanguine), gentle and weirdly lyrical but also kind of matter-of-fact, sung but at the same time as though something were being explained (phlegmatic?), angry and violently in-your-face (definitely choleric) and finally heartfelt, imploring, the singers sounding united (melancholic?).

Set apart are the three ‘non-expressive’ episodes: the first barely audible and somewhat breathless, the second harsh, pitches rudely extruded (yet making for an interesting comparison with the angry third refrain that follows it: the comparative lack of emotion here is striking) and the third marvellously enunciated with borderline raspberry-blowing vibrating lips.

A fantastic miniature that, as with all the works in this Lent series, again demonstrates how much interest can be packed and how far an idea can be explored in just a few minutes.