Tonight, this year’s Proms season kicks off in earnest, and once again i’ll be reviewing all of the contemporary pieces receiving world or UK premières. As an extra feature this year, i’ve interrogated some of the featured composers with a short series of questions, the answers of which hopefully will provide a little extra insight into each composer and their music, both generally and specifically with regard to the piece being premièred at the Proms. First up is British composer Tom Coult, whose new work St John’s Dance gets the season up and running this evening. Many thanks to Tom for his responses; you can also read the programme note of his piece after the questions.

All my pieces so far are written in scores for humans to play…I’ve written quite a lot for orchestra or large ensembles so there are often quite a few of these humans. I try to make my music as magical and colourful as possible – fleet of foot but highly focused.

I always needed to be a musician of some sort – growing up I wrote music influenced by jazz, blues and country music, and also got really excited by Bach. I went to study music at Manchester University and got swept away by Stravinsky and started writing notated music.

I learned a huge amount from my two main teachers, Camden Reeves at Manchester and George Benjamin at King’s College London. Their tuition and music had big impacts on me. Some of the composers who I turn to again and again for inspiration include Ligeti, Boulez, Birtwistle, Ravel and Vivaldi. I’m currently very interested in the playwright Caryl Churchill and how her plays behave.

The beginning is one of my favourite bits. I normally have some kind of sound in my head or how I want the piece to move, and I begin by jotting down a million ideas, most of which never leave the runway, but some take flight and I run with them. The hardest bit is the middle bit when I don’t know what’s going to happen in the piece but need to press on – shaping and moulding and searching until things lock into place.

This wouldn’t be the piece it is without the context of the commission and the expectations it brings. If you get commissioned for a short concert opener for orchestra, there are certain conventions and clichés (it should be energetic, exciting, accessible etc) – I found this sense of enforced merriment and energy quite amusing, so I started thinking about St John’s Dance which is a condition that afflicted peasant communities in the middle ages. People would start dancing involuntarily and wouldn’t be able to stop for weeks and sometimes months on end. The condition seemed to be contagious, and would sometimes result in many hundreds of people dancing in groups, often until they collapsed from exhaustion. In 1278 around 200 people died when a mass dance caused a bridge to collapse into the River Meuse. My piece involves several dances but they tend to spiral out of control or are heard at the same time as each other.

Sonnet Machine for orchestra has some of the same breathlessly changeable quality as St John’s Dance – there may be opportunities for British audiences to hear Sonnet Machine in concert next year, but in the meantime there are some extracts on my website.

I am writing an opera with playwright Alice Birch. We don’t know what it’s called yet, but there are clocks in it. I’m also writing a piece for the Arditti Quartet. 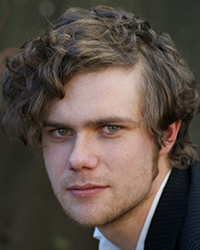 My piece is a relentless series of dances – often spiralling out of control, sometimes with more than one heard simultaneously. A solo violin opens the piece, leading to a hesitant swaying dance in percussion and plucked strings. The second and most prominent dance is for full orchestra driven by the four trumpets, before the strings, tubular bells and muted brass outline a third dance. Elsewhere, we hear the solo violin again, and the first dance rapidly accelerates and is joined by a demented clarinet.

St John’s Dance was a form of mass hysteria that periodically afflicted European peasants in the middle ages. People would start dancing involuntarily and wouldn’t be able to stop for weeks and sometimes months on end. The condition seemed to be contagious, and would sometimes result in many hundreds of people dancing in groups, often until they collapsed from exhaustion. In 1278 around 200 people died when a mass dance caused a bridge to collapse into the River Meuse. Many dancers would experience a state of ecstasy, remove their clothes or shout out the names of the saints they were hallucinating. For most, however, it seemed a horrific experience – writhing, screaming and foaming at the mouth were common.

Thanks so much for this Simon! So often with a new work at the Proms, it can be hard to know what to expect, and even though there is a programme note in the guide, I’m often left wanting to find out more about the composer and their music – particularly if it’s a composer I’ve never heard of before. Keep up the good work – I’m looking forward to the next in the series.

Glad you like it Dan! i haven’t spoken with all the featured composers, but all being well there’ll be twelve more of these to look forward to.