This evening’s Prom concert includes the world première of the new Cello Concerto by India-born, British composer Brian Elias. It’s five years since his music was last heard at the Proms, when his powerful scena Electra Mourns (setting Sophocles) received its first performance, and tonight is Elias’ fourth appearance at the Proms. Although composed for Natalie Clein, due to her being unwell she’s been replaced for the world première by Leonard Elschenbroich, who’ll no doubt do a sterling job, but it’s far from an ideal situation for a first performance. Apropos, Clein has released a statement:

Brian Elias’ piece has been in my heart, mind and fingers for almost two years and I am devastated to have to withdraw from this wonderful Prom. But the piece will speak and sing beyond its dedicatee and I will truly be in the hall in spirit with Leonard, Brian, Ryan and the BBC National Orchestra of Wales, and all who hear its first (but not last!) outing!

In anticipation of this evening, here are Brian Elias’ answers to my pre-première questions, followed by the detailed programme note for the piece – which Brian mentioned to me recently some listeners may prefer to read after the performance. Many thanks to Brian for his responses and to Sam Wilcock at Music Sales.

I would describe my music as lyrical and dramatic with a strong rhythmic impulse. I strive to make my orchestral and instrumental work colourful and am happiest when it also has a solid harmonic foundation. It has never been my aim to write avant-garde music but I certainly would not describe my aesthetic as reactionary. Although I find it almost impossible to say what my music is about, (Stravinsky said that music is about nothing but itself), I find that I am always driven by creating worthwhile content and a ‘narrative’ that is meaningful in musical terms. I also do not write unless I believe a piece has a real need to exist.

I started ‘making up’ pieces as soon as I began piano lessons in Bombay at the age of seven, but this was a private activity, as my piano teacher just wanted me to get through my scales and Associated Board pieces. In addition, none of my family had any musical training. I started writing pieces down when I came to school in England aged thirteen, when my teachers encouraged me. Although I did waver occasionally through lack of confidence and the many perils of growing up, from my present perspective aged 68, it seems that I never really did have a choice about being a composer, and it has definitely been my life.

My academic career has been erratic to say the least. I left school after A Levels, and went straight into the Royal College of Music for a nondescript year, followed by a meteoric career at Cambridge that lasted all of four months. My main studies were with Elisabeth Lutyens, whom I met at Dartington Summer School of Music in 1964, when I was sixteen. She was a great teacher who taught me how to be a professional and how to ask myself the right questions. Dartington introduced me to so many new and wonderful things; I heard Pierrot Lunaire and Webern and Berg songs there for the first time, sung exquisitely by Jane Manning. These experiences have remained with me, and have always been a beacon for me.

A new piece will most often start with an idea that comes ‘out of the air’. It could be an interval, a chord or a short melodic phrase, motif or even a musical gesture that persists in my conscious mind. I then depend a lot on intuition to develop it and take it a little further before I start sketching. The piece always grows organically from this germ, and almost all my pieces are generated from the material that is written on the first one or two pages. These days I no longer feel that I have to ‘justify’ every note I write down by linking it to some kind of system, as I have developed my own vocabulary rather painstakingly over the years. Nevertheless, I do scrutinise both the detail and the broader structure of what I write very closely indeed, as I have always been rather unconvinced, worried and perturbed by stream-of-consciousness writing. As a result, I find I now have greater freedom and far fewer inhibitions than ever before.

My Cello Concerto was completed in March 2015 and was originally commissioned for the 2016 Proms; the première was postponed to this year. I was intrigued by the idea of writing a work for cello and orchestra as I realised that it would make me think very differently about how to handle the orchestra and its relationship with the soloist. My ear was really stimulated by this prospect and I was thrilled not only to be able to embark on the piece but also to write it for Natalie Clein. It is the only concerto I have ever written, but I would like to point out that I have also written several song cycles for voice and orchestra, a medium that is not too different in many ways to writing a concerto. The solo part is very lyrical and the challenges for the soloist lie more in how the work should be projected than in any complicated techniques. I like to think that I explore ideas and inventions that are new for me in every piece I undertake but am also conscious that I do have my own voice and characteristics that colour all my work.

There are now three CDs of my work issued by NMC Records that represent my work through the years. The latest CD, Electra Mourns, a setting of Sophocles in the original Greek, is a compilation that includes the title piece for mezzo-soprano, cor anglais and string orchestra. There are also some songs which indulge my love of poetry (in particular the unaccompanied John Clare cycle), and Geranos, which was commissioned for the Fires of London, and is the first work in which I explore my enduring interest in ancient Greek ideas about the rhythmic relationships between music, dance and poetry. An earlier CD has a recording of my Five Songs to Poems by Irina Ratushinskaya, for mezzo-soprano and large orchestra, which was a ‘breakthrough’ piece for me.

Believe it or not, I’m now working on yet another song cycle, this time for baritone and orchestra, using words by the American poet W. S. Merwin. 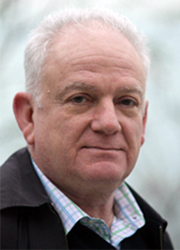 This concerto is in four main sections that are played without a break. As with most of my work, the music throughout is generated from the ideas presented in the first few bars, and these ideas and their variants appear freely in the different sections. Recurring material and references to earlier sections are used deliberately to create not only a sense of unity but also an impression of familiarity that aspires to induce a dream-like perception of the passing music, a kind of spiral.

The piece opens with a slow introduction that gradually quickens into the first main section, an allegro. The form of the second section, which is in a lighter mood, is based on an early 13th century verse form, the Sestina, which consists of six stanzas of six lines each, followed by an envoi. The words that end each line in the first stanza are rotated in a strictly prescribed pattern* to give the line-endings of the remaining stanzas; in this adaptation, each “line” consists of four bars, and the repetitions ensue according to the plan. The intricate repetition inherent in this form can also be seen as a form of spiral. The third section is an extended slow movement interrupted by a quicker episode that refers to the first section. Generally lighter and in a similar vein to the second section, the final section includes a reference to the slow movement before returning to the lighter music that ends the piece.

This work is dedicated to Natalie Clein. 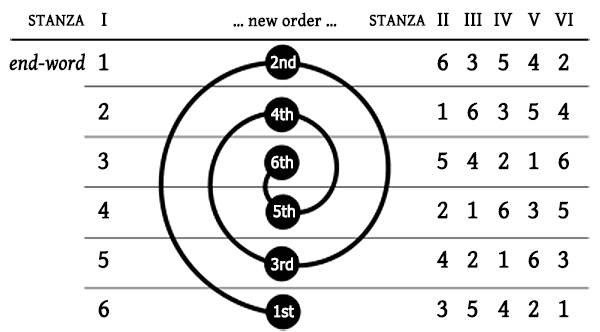