This afternoon’s Prom concert, titled Bach’s ‘Little Organ Book’ past and present, affords the opportunity to hear no fewer than three world premières, each of them short works continuing the Germanic tradition of the chorale prelude, reworking hymn tunes. One of the composers featured is Cheryl Frances-Hoad, and as preparation for her take on one of the most renowned Lutheran hymns, ‘Ein feste Burg ist unser Gott‘, here are her answers to my pre-première questions along with her programme note. Many thanks to Cheryl for her responses.

I try to write music that affects people emotionally, that is challenging yet satisfying to perform and engrossing to listen to. My main concerns involve melody, harmony, counterpoint and rhythm: I feel there is so much more to be said using these musical elements. That said, I’ve recently been using a lot more experimental techniques in my work, and writing for unusual instruments such as a Commodore 64 computer! I imagine ‘distilling’ emotion when I write: endlessly tweaking everything from phrase lengths to articulation in order to heighten the impact of my music. Once I’ve finished this process I hardly ever revise though. I feel very practiced at being ‘inspired’: whilst most of my music is influenced by other composers, poetry, the landscape, art or science, etc, I’d just as happily write a piece about the floorboards in my house.

I started composing when I was really young – as soon as I started playing the ‘cello when I was 7 years old (my mum still has pieces that I wrote for the open strings, written when that was all I could play at the time). I was cripplingly shy as a child and was basically unable to express myself properly in any other way I think: I would just fill up manuscript books with pieces every holiday instead of spending any time with kids my own age (it didn’t help that I went to a specialist music school 100 miles away so knew no one where I lived!). I won the BBC Young Composer Competition I was 15 and it lead to commissions, so I never thought I’d do anything else as an adult. I realise how incredibly lucky I am to have been able to feel this way, having received full scholarships for all of my education etc. I’m not sure I would feel the same way if I was leaving University now.

I spent ten years at the Yehudi Menuhin School, four years at Cambridge University, and then I did a PhD in Composition at Kings London. The music that I played as a cellist (Brahms, Bach, Britten, Ligeti) and writing a fugue a week at Cambridge are what have influenced my music the most I think. I have had some wonderful teachers (Malcolm Singer, David Knotts, Robin Holloway, Silvina Milstein) who of course gave me lots of advice but mainly allowed me to discover my own style through composing, composing and composing.

I usually take an extra-musical stimulus as inspiration – a poem, a work of art, the landscape, a scientific idea: anything really! I’ve also been commissioned to write a lot of works that are homages to other composers too, which involves me listening to a lot of that composers music before I begin. I would say I try and refine my methods with each piece: for me, my main concerns are still melody, harmony and rhythm, and my aim is to convey potent, distilled emotion.

When I start writing I usually write lots of (word) notes, then I begin to improvise, and my composing process is basically a long process of improvise, analyse, develop, improvise. I play and sing my pieces as I write them incessantly, repeating and repeating a phrase and altering miniscule things until it ‘breathes’ write. Then after it’s set I very rarely change anything.

This piece was commissioned to be part of William Whitehead’s Orgelbuchlein Project. The project is to complete Bach’s unfinished collection of miniature organ chorales, in reflection of the ethos of Bach’s original pieces. So it was quite a strict brief, but I really enjoyed thinking about what Bach might do if he were alive now! (see programme note for more info?)

I am so delighted to have been asked to write this piece for organ at this time though – it’s always been an instrument I’ve been scared of, but luckily just before this work I had been commissioned to write a new Evensong for Peterborough Cathedral, so this piece feels like a culmination of all I’ve learnt about this incredible instrument!

If people like this piece, I’d recommend my new disc, Stolen Rhythm. It contains a collection of my works that are also homages to other composers, and features solo piano works, a piano trio, and three chamber orchestral works.

I’m thrilled to be writing a piano concerto for Ivana Gavric and the Southbank Sinfonia at the moment, and then a solo trombone work for the London Sinfonietta. 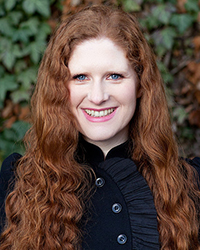 I was delighted to be asked to be part of William Whitehead’s Orgelbüchlein project, especially when it was suggested that I set Ein Feste Burg (Martin Luther’s best known hymn). The idea of setting the tune as Bach might have done today really appealed, and allowed me to immerse myself in his compositional techniques and then take them off in directions I thought might of appealed to him if he had been composing in 2017. My setting features an exact (occasionally inverted) two part canon throughout (first between the soprano and alto parts, then the alto and bass). The hymn tune is played very slowly at the top of the texture, above the three other voices which gradually get faster and faster (each at different rates, so that at many times there are effectively three or four different pulses going on simultaneously). In addition, the organ gets louder and louder as the music speeds up, so that the full might of the RAH organ is felt at the end. My rather un-pious image when writing was of Martin Luther and his Mighty Fortress approaching at an increasing pace until they were millimetres away!