Swedish composer Andrea Tarrodi‘s orchestral piece Liguria, composed in 2012, receives its first UK performance at this evening’s Prom concert. Her music is new to me and, i’m sure, to many others, so her answers to my pre-première questions provide some invaluable background information, along with her programme note for the piece. Many thanks to Andrea for her responses.

Besides composing, I used to paint a lot when I was a teenager, and even though music became my main interest, I still, in many ways, connect music with images and colours. Many of my pieces have been inspired by paintings. The modes, particularly Dorian and Mixolydian, which I use most often in my music, also have different colours for me.

I think I wanted to be a composer from the time I was eight years old and began playing the piano. I instantly started to come up with my own melodies, and the timbre of the piano was like magic to me. I think seeing Milos Forman’s Amadeus had something to do with it as well :-). One of my favourite things to do was to hold the sustain pedal down and strike the black keys. When I was sixteen, I discovered Debussy, whose music has been a great influence on mine. Since then I have been writing or thinking about music almost every day. Composing is an essential part of my life, and when I have been away from it for too long, I notice that I get irritated and feel a bit empty. I love the mix between intuition and structure that defines composing for me and makes me feel balanced. So it is more of a curse/calling than a choice, I think.

I studied composing and arranging at the College of Music in Piteå, Norrland, Sweden. Then I continued at the Royal College of Music in Stockholm were I studied composition for six years, during which I spent one year as an exchange student at the Conservatorio di Musica di Perugia. Debussy had a major influence on my music during my teens, and later on the music of Jan Sandström and Lili Boulanger became very important for me as well. Kate Bush and Odetta are other artists that have influenced my music.

When I compose a piece I usually start with a ‘non-musical’ idea. It can be a dream that I had, a painting, a place that I have visited or a landscape. Then I draw a sort of map with colours and symbols that defines the form of the piece, how it will start, progress and end. Throughout the compositional process the music sometimes goes in a different direction than I had planned, but it is good to have the original map to fall back on. After that I start experimenting with sounds and harmonies, and when I have found some modes and soundscapes that I like the actual writing of the notes begins.

I like to compare it with painting a picture. You start with the background color, then draw the landscapes and finally the creatures (melodies) that live there.

Liguria was written in 2012 and the title refers to a place in the northwest of Italy that I visited in 2011. I remember arriving in Riomaggiore, a small fishing town, after a long train ride. The tracks go right through the mountain, and we got off at a train station that had the most remarkable view. The waves of the Mediterranean Sea rolled against the steep cliffs. As soon as we got there I knew I wanted to write music about that place. In relation to earlier orchestral works of mine it is built on sort of the same modus as in almost all of my pieces, where you will find Mixolydian and Dorian clusters. Other than that I think that this piece was a new step in my musical development.

I would recommend listeners to listen to the CD Highlands with my cello concerto and other orchestral works.

Right now I am writing a concerto for two violins and strings with soloists Malin Broman and Pekka Kuusisto. Soon I will start writing a short opera about the life of the famous Swedish painter Sigrid Hjertén commissioned by the Royal Opera in Stockholm. In April 2018 there will be a festival featuring my music at the Stockholm Concert Hall where, among other pieces, Stellar Clouds – Piano Concerto No. 1 and Wildwood for orchestra will be premièred. 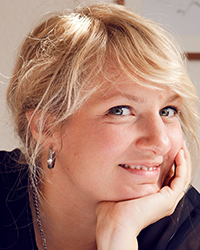 On the northwest coast of Italy by the Ligurian Sea are five small fishing villages clinging to the steep cliffs. These are called Riomaggiore, Manarola, Corniglia, Vernazza and Monterosso, and between the villages are paths connecting them through the mountains. In August 2011, I visited this area and as soon as we arrived I knew that I wanted to write music about it. The result is a work that can be described as a “walking tour” among the small villages: Riomaggiore with its high waves; Manarola with its clock tower; Monterosso, where sunbathers stressedly hurried to secure a place on the beach and open up their colorful beach umbrellas, as if in a scene in a Fellini film; Vernazza, with its watchtower and cliffs; and lastly, Corniglia, where the night sky was filled with stars.