Today’s late-evening Prom given by the Chineke! orchestra opens with a new work by British composer Hannah Kendall, titled The Spark Catchers. In preparation, here are Kendall’s answers to my pre-première questions, together with the work’s programme note. Many thanks to Hannah for her answers.

My main goal as a composer is to write music that speaks to people, sparks something in the listeners’ imaginations and is enjoyable for the musicians to play. It often has a strong rhythmic drive, and is intricately woven, with the separate lines coming together like a jigsaw to create the full picture.

I became a composer relatively late, aged 20, at the University of Exeter, where for the first time in my musical journey performing and writing new music was actively encouraged, and a vibrant part of the creative activity there. I ended-up taking Joe Duddell’s composition class because I needed 10 extra credits to graduate and found that I much preferred it to anything else that I was doing, and that I was pretty good at it!

I read music at the University of Exeter, and studied advanced composition at the Royal College of Music. I also studied arts management at the Royal Welsh College of Music and Drama. My teachers and mentors, Joe Duddell, Kenneth Hesketh and Julian Anderson, have been the most important influences through their incredible support, encouragement, and teaching abilities too, of course! Each, in their own way, helped me to pursue and find my individual/unique voice/writing style, which is the most important thing as a composer, and what I strive to achieve through all of my works.

My music is mostly inspired by poetry/texts or art. First, I always draw a graphic score, making a visual representation of what I want the music to sound like throughout, using colours and images to depict a specific atmosphere – pale blues for clear and crystalline music for example – and then plotting which instruments might be best to carry that idea across. It helps with getting a plan of what the piece might sound like without being restricted by notes. Then, I plot the harmonic structure at the piano, working out chords intuitively to best reflect the images I’ve created, before eventually filling-in the more specific musical motifs. This is the process that best works for me, and is quickest in getting the ball rolling. I’ve only recently started writing in short score first, rather than orchestrating as I go along, and would never go back now!

The Spark Catchers sits in stark contrast to my previous piece, which was my chamber opera The Knife of Dawn, based on the life and works of Caribbean/Guyanese poet and political activist Martin Carter. It’s set during his month-long hunger strike whilst he was imprisoned without charge, so quite a harrowing tale, whereas The Spark Catchers is mostly light, bright and energetic. It took a while to get into that change of gear, especially after having worked on The Knife of Dawn for two/three years, yet it was a welcome change at the same time. Saying that, aspects from the opera have crept into The Spark Catchers, which is understandable after having worked on the former for such a long time. Chineke! wanted a celebratory piece for their debut Prom, which felt completely right from my end too. It was a great opportunity to get back to my ‘rhythmic roots’, as it were, which is the sort of music I particularly enjoy writing.

I’d recommend Vera. It’s one of my earliest pieces for clarinet, violin, viola and cello. I’m very fond of it, and it also captures that playful and rhythmic drive that’s also present in The Spark Catchers.

Smaller pieces!  – A (‘Trout’ formation) quintet for an ensemble including cellist Natalie Clein, and double-bassist Chi-chi Nwanoku; a piece for solo piano, which I think will take its inspiration from Norman Lewis’ 1964 painting ‘Processional’; and a new work for CoMA (Contemporary Music for All). All of these works are due around the same time, which will be interesting! 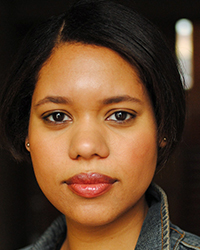 Lemn Sissay’s incredibly evocative poem, ‘The Spark Catchers’, is the inspiration behind this work. I was drawn to its wonderful dynamism, vibrancy and drive. Specific words and phrases from the text have established the structure of the work, and informed the contrasting musical characteristics created within the piece’s main components.

The opening ‘Sparks and Strikes’ section immediately creates vigour and liveliness, with the piccolo and violins setting-up a swelling rhythmic drive, interjected by strong strikes from the rest of the ensemble. This momentum continues into ‘The Molten Madness’, maintaining the initial kinetic energy, whilst also producing a darker and brooding atmosphere introduced in the bass lines. A broad and soaring melodic line in the french horns and first violins overlays the material, moving into a majestic episode led by the full string section, accentuated by valiant calls in the woodwind, brass and percussion, culminating in a sudden pause. A lighter variation of the opening rhythmic material in the clarinets, harp, and strings follows, creating a feeling of suspense. The texture builds-up through a jazzy figure led by the brass, leading to powerful and surging interplay between the flutes, oboes and violins.

The lighter, clearer, and crystalline ‘Beneath the Stars/In the Silver Sheen’ section follows. Quiet and still, it is distinguished by its gleaming delicacy through long interweaving lines, high pitch range and thin textures. An illuminating strike, underpinned by the glockenspiel and harp, signifies the climax of this section. Subsequently, the opening zest comes back again through dance-like material which culminates in ‘The Matchgirls March’ with its forceful and punchy chords.

The Spark Catchers ends with a coda-like section, which carries over the power of the ‘March’, whilst also incorporating variations on musical motives from ‘Sparks and Strikes’ and ‘The Molten Madness’, finally concluding on a sparkling flourish.