Concert halls be damned! Tonight the Proms makes another of its peripatetic excursions beyond the confines of the Royal Albert Hall, paying a first visit to The Tanks at Tate Modern. Among the music being performed will be the world première of Prisma Interius V by experimental American composer Catherine Lamb. To get you whetted and prepped, here are her responses to my pre-première questions, along with a programme note for her piece. Many thanks to Catherine for her answers.

I began my musical life at an early age (around age 5 on piano, officially) and as long as I can remember I was thinking about musical composition. My earliest distinct compositional memory is choreographing a dance structure to Stravinsky’s Firebird at around 6 years old. Then later around age 8 creating cassette recorder pieces and writing/directing plays for my friends to perform in class. By around age 11 I preferred to bring my own piano compositional experiments or reconstructed pieces to lessons rather than properly practice what I had been given (talking to other composers this is a common occurrence amongst us). It wasn’t until I was in my early 20s that I was taken seriously as a composer by others and so then finally began to identify as one.

I was brought up learning viola and piano, playing in school and youth orchestras, etc. I started my college years at a small traditional music program in Minnesota but then abandoned it to study Hindustani music in Pune, India. I then attended the California Institute of the Arts to study composition with James Tenney and Michael Pisaro. At that time I met the Indian experimental filmmaker Mani Kaul and learned about Zia Mohiuddin Dagar’s Dhrupad music through his own deep study. I consider these three mentors to have been critical to my artistic development at an impressionable time in my life. I later received my Masters at the Milton Avery School of Fine Arts at Bard College and was around a rich, fluctuating group of artists from various practices. It has also been the dense variety of my peers from different places I feel and have felt inspired by, and there are too many names to include all at once together.

Each piece comes from a different kind of inspiration. Through the completion of one, another might be generated, or, a completely new image might emerge. Usually an image is then followed by working through intuitive and practical numerical structures. The numbers are tones and their interactions and on a different scale, time. So I sound this world out in the air, on my viola, singing, through a synth, with friends, etc., any means to get inside the materiality of the sound. Until finally the form verges with the physicality and the image, sometimes diverted to another place altogether.

This piece is part of a current series entitled Prisma Interius. These pieces are situated aside a synthesizer my partner Bryan Eubanks and I have been developing together over the past few years, utilizing a live stereo image of the surrounding listening space and placing tight filters around specific frequencies existing in the correlated musical piece. The potential is to create an intermediary atmosphere between the listening environment and the tonal interactions existing in the musical piece itself. This piece being presented Prisma Interius V is the largest (yet shortest), most dense version in the series so far.

I suppose the other pieces in the series… 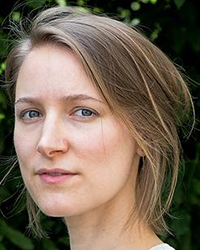 I continue to work on more pieces in Prisma. Next is a solo piece for my dear friend Johnny Chang, a duo for the Norwegian musicians Karin Hellqvist/Heloisa Amaral, and an ensemble piece for Plus Minus.

I’m very much looking forward to meeting again in December with dear friends Laura Steenberge and Julia Holter to explore our trio Triangulum together. And I hope to continue to work with musicians like flutist Rebecca Lane, cellist Deborah Walker, and composer/vocalist Yannick Guedon as much as possible. Chang and I have recently discovered some newly found raw materials the early music composer Viola Torros was working with, possibly on her travels in Egypt, and we hope to find other interested interpreters of her music.

I am also completing an extended version of a piece Curvo Totalitas for Yarn/Wire. And there are things being planned for later. So it is a bit chaotic right now, more than ever for me personally, but so interesting to dig through it and I am learning a lot…