This evening, Finnish composer Lotta Wennäkoski‘s new work Flounce will literally become the beginning of the end, getting started the Last Night of the Proms. For the final time this year then, here are my pre-première questions, together with Wennäkoski’s answers and her programme note for the piece. Many thanks to Lotta for her responses.

I’m often navigating in an area between exciting timbral qualities and more conventional gestures like melodic fragments. A feeling of air, space and clarity are important, and I also hope my music is always somewhat emotional.

I always liked music theory and ended up studying that at the Sibelius Academy in Helsinki – the studies anyhow included very practical things like style exercises in both 20th century and older music. At the same time I was asked to do music for a couple of short films and radio plays – my old school friends had gone to study theater and film making. I did the music but wanted to learn more, and thus started to take composition lessons. Then it slowly became the thing I wanted to do more. After a couple of years it felt as if all the paths had actually led there – in composing I could use everything I had previously done and experienced with music (and life).

At the Sibelius Academy (first music theory and later composition). The most important teacher has been Eero Hämeenniemi, but I also studied with Paavo Heininen and Kaija Saariaho – and one year in the Netherlands with Louis Andriessen.

I would anyway say one of the most important musical (and personal) experiences in my life has been a year at the Béla Bartók Conservatory in Budapest at the sensitive age of 19. Being alone in a foreign (and at first very strange) country I was totally surrounded by the Hungarian language and music including the strong folk tradition.

I usually try to first find an ‘overall idea’ – often without any musical planning. It can be anything from an atmosphere to a word or a phenomenon of any kind – for example, I’ve worked with an idea of different fabrics (as in my flute concerto) or sometimes with, say, an excerpt of a poem. With Flounce it was the title that started to guide the inspiration.

The speciality in Flounce is its short length – it’s only five minutes. I also knew it will be the first piece at the famous Last Night of the Proms – of course I wanted the evening to start with something that is not too introverted(!). I’ve written a lot of orchestral music during the last few years, but the BBC commission was naturally a great honour and pleasure.

The flute concerto Soie is one of my personal favorites. There’s a beautiful recording of it by Kersten McCall and the Finnish Radio Symphony Orchestra in a CD published by Ondine.

At the moment I’m writing a work for male choir and symphony orchestra to be premiered at a very festive occasion: Finland has its 100th anniversary as an independent state on December 6th. The poems are in Finnish, Swedish and Sami (those are the three languages in my country). Then a piece for the Turku Cello Competition, to be performed by all the finalists. 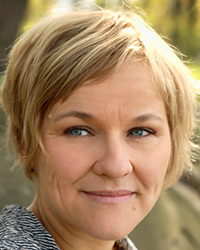 Sometimes it is the title that starts to guide the musical ideas of a work in the making. This was more or less the case with the short orchestral piece Flounce, written in spring 2017. I was fascinated by the different meanings of the English word flounce – both the verb and the noun. The piece is thus largely characterized by brisk gestures ‘non troppo serioso’, but it also has passages of lace-like ornamenting in a more lightweight and lyrical mood. The same kind of duality is present in the way I’m aiming to combine an often energetic pulse with (sometimes non-conventional) timbral ideas and a feeling of space in the orchestration.

Flounce was commissioned by BBC Radio 3. It has been a great source of inspiration to know that it will be first performed by the BBC Symphony Orchestra conducted by Sakari Oramo at the Royal Albert Hall, as part of the BBC Proms 2017.