Last weekend brought the welcome return of Alba New Music, Edinburgh’s nascent new music festival. Having got the ball rolling with a bang last year, the 2017 festival as a whole felt more focused, in part due to deliberately having something of a thematic thread running through it. With an emphasis on Brian Ferneyhough, featuring two of his electroacoustic works – Time & Motion Study II and Mnemosyne – that thread might appear to be simply about memory, but was actually more nuanced (and less passive) than that, above all emphasising recognition. This is the key to both those pieces, and it was also fundamental to some of the other music heard throughout the festival.

It’s forty years since Time & Motion Study II for cello and electronics was first unleashed on the world, but it’s also ten years since Neil Heyde and Paul Archbold released their DVD of the work (now available for free download via iTunes). There’s no such thing as a ‘definitive’ performance of any piece, of course, yet personally speaking, i’ve come to regard Heyde and Archbold as having got so inside the essence – technical, psychological, emotional – of this particular work that since 2007 i’ve come to think of them as its most ‘authentic’ mouthpiece. Their Friday evening performance – in the stark but attractive space of the City of Edinburgh Methodist Church (an ideal locale for new music concerts) – only confirmed that assessment. It’s worth noting that the reputation of this piece (underlined by the fact that Ferneyhough considered titling it ‘Electric Chair Music’) results in one expecting violence—and only violence. Yet as in so many of his works, much of the music is highly lyrical, albeit often strained and plaintive. Furthermore, there’s something ghostly – literally, quasi-paranormal – about the way parts of the cello’s material are retained and broadcast back, materialising as if from nowhere at both a physical and temporal distance from the soloist. Watching Heyde and Archbold in action, i initially found myself anxiously pondering whether the performance was too slick, too accomplished, whether they’d even managed to make Time & Motion Study II seem (dare i say it) easy. Certainly by the time the piece arrived at its brilliant and beautiful episode of near-stasis, sustained pitches resonating from cello and electronics in apparent sublime sympathy, its reputation felt distant, almost forgotten. Yet all this is a trap, one that Ferneyhough lays and which Heyde and Archbold executed with almost insouciant ease. Now, the violence: and immediately the enormous technical difficulties of the work became utmost apparent, Heyde caught up in an epic struggle, fighting against pretty much everything: his material, the electronics, his instrument, his very self. The angry vocalisations, heavily distorted, only made the violence more desperate and intense. Few works leave an audience as stunned, drained and exhausted as its performers, but Time & Motion Study II still has that power. It felt hard to find the energy even simply to applaud. 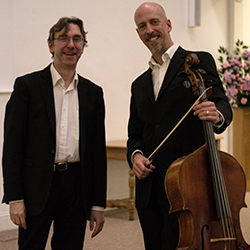 Alongside the Ferneyhough, the recital contained three other works. It was preceded by Morton Feldman‘s brief Projections I which, and i mean this entirely positively, acted as a perfect palate cleanser. Paradoxes abounded in Heyde’s performance – the large space suddenly seemed small, while the music was delicate yet not fragile, faint yet strangely robust – which experienced a curious, inadvertent counterpoint from outside the building: a soft, recurring high-pitched note that seemed to be acting in dialogue with the cello (bringing a hint of Cage into the concert). The least rewarding work was Richard Beaudoin‘s Digital Memory and the Archive, three movements for solo cello that take as their starting points specific recordings of pieces of music, oblique aspects of which are ‘auralised’. For example, the first, Bacchante, is based on the micro-timings in a recording of Debussy performing the first of his preludes (Danseuses de Delphes), while the second, Nachzeichnen/Tracing, is partly based on the creaking of the piano stool in a Glenn Gould recording. Fascinating theoretical ideas do not invariably lead to fascinating aural experiences, and the impenetrable arbitrariness that permeated much of the music frustratingly proved that point. There were times when it felt more convincingly that something was going on – occasionally in Bacchante but most in the final movement, You Know I’m Yours, derived from a Thelonius Monk recording – yet even in these more engaging passages, it remained hermetically-sealed, inscrutable and unknowable. Jonathan Harvey‘s Advaya could hardly have been more different, warm and open, filling the space with glistening gestures and fizzing drones. Since his death five years ago, Harvey’s music seems to have more-or-less vanished from concert halls which, considering he was always one of our most deep-thinking and innovative composers, is as sad as it is strange. Composed in 1994, Advaya undergoes a not dissimilar progression to that in the Ferneyhough, initially preoccupied with extended ecstatic lyricism that eventually fragments and then atomises, resulting in an effluvial torrent of notes and motes. However, the ecstasy doesn’t vanish, and its subsequent returns were among the most lovely moments of the concert, particularly its wonderful closing duet, cello and electronics dancing an intimate ballet of synchronised gestures.

Before and during Saturday’s afternoon concert, given by John Wall, i couldn’t help noticing through the windows of the church that the clouds were moving past extremely quickly, silently subject to considerable quantities of raw power. This seemed an apt metaphor for Wall’s music, the delicacy of which often hints at (but rarely unleashes) an underlying force and/or pressure. It’s certainly evident in Construction III, which began the concert, sitting perpetually poised at an apparent tipping point, where every gesture, small and great, feeds into this eternal tension. Cphon, which followed, goes further but in a more subtle way, seemingly wielding infinite power to chop, slice, arrange, reduce, extend, distort and otherwise render its sounds yet resulting in a narrative comprising the most delicate and graceful network of tiny sound fragments. The kid gloves came off, though, in Wall’s 20-minute electronic improvisation, which brought back the theme of recognition to the fore. Two aspects of the improvisation were especially impressive. First was its beautifully-controlled density, both in terms of quantity of material and detail as well as registral clarity, moving between heavily over-populated bandwidths and the kind of registral polarisation that has typified his work since the late 1990s. Second was its sense of perspective, both in terms of proximity – establishing clear regions of fore-, middle- and background – as well as vertical layering, Wall setting up repetitious materials that persisted over and under other shifting sound shapes. The role of recognition came in the way the relatively narrow palette Wall used – based on pre-planned sounds that are manipulated in real-time – which articulated a clear three-part structure, something in between ternary form and a triptych. Its central panel was fabulous, a more pensive section acting as an interlude, where glancing attacks and short radar-like pulses merged and mingled into a complex rumbling texture with transient ephemera turning and glinting above. Utterly mesmerising, all the more so since Wall – unlike the majority of such concerts – wisely opted to perform from behind the audience, allowing us to focus entirely on the music. 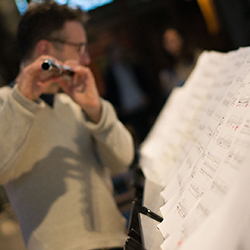 As in 2016, Alba New Music came to an end in St Giles’ Cathedral, back in the company of Scottish flautist Richard Craig. Craig’s recital consisted of three substantial works, with Ferneyhough‘s Mnemosyne for bass flute and tape at its epicentre. i’ve always found this work to be supremely underwhelming, and in the wake of hearing Time & Motion Study II the previous evening, i wonder whether this is due to its more refined approach, which for all its inherent complexities is sonically clean and straightforward, lacking the visceral human heft of the cello work. Mnemosyne also seems narratively unconvincing, the supposed narrowing-down of its pitch options due to the eight additional prerecorded flute parts hemming it in, both arbitrary in execution and, again, lacking in meaningful emotional weight. Yet for all its flaws, Craig made it sound lovely, and what it lacked in substance it more than made up for in superficial beauty. Craig had clearly chosen repertoire that would work well in the cathedral’s richly reverberant acoustic, and Richard Barrett‘s Vale (Latin for ‘farewell’) could hardly have been more perfect. There’s always a lot going on – both intra- and extra-musically – in Barrett’s music, yet what’s consistently impressive about it is its immediacy. For the most part, it avoids getting bogged down in its multi-faceted intentions and speaks with a forcefulness that, though further listenings will always be essential, provides something vital and real on first contact. i can vouch for that in the case of Vale because this was in fact my first contact with it (i’ve not yet had time to listen to Craig’s new CD which contains this piece; review coming in due course). Melody is at its core, an interplay between angular, overblown accents – the fingering and articulation of which evidently become uncoupled as it continues, creating interesting pitch smudges – and passages so withdrawn as to sound painfully reticent, later involving glissandi (Craig’s technique at these moments was simply amazing). i can hardly express how enthralling and moving it was, all the more so at its close, Craig expressing a real sense of struggle, fading and/or fizzling out at the end.

Craig brought the concert and this year’s festival to an end with Kristian Ireland‘s luminous for amplified alto flute. Over the course of its half-hour duration, i almost wondered whether my heart was going to come to a stop. Articulated with a Feldman-like single-minded patience, it unfolds from extremely quiet pitches emanating via ex- and inhalations, resulting in softly-clashing dyads (out) followed by infinitesimal whispers (in). It was as though Craig were putting down individual aural breadcrumbs to be discovered – or, to switch analogies, like reciting a story or poem one halting word (or even syllable) at a time. Later on, Ireland allows the material to become more extended, which in such a small-scale environment as this (another fitting analogy: as though everything had been shrunken down to microscopic size), such minor extensions felt like major elaborations, almost rudely exuberant despite their unwavering fastidiousness. Whatever it all meant – whatever it all was – i very much liked being in its enigmatic, challenging, disquieting, ravishing company. In the same way as a star umpteen light years away, it dazzled.

Alongside these excellent concerts, i have to flag up the various talks that complemented them. Some served as introductions, with especially valuable insights provided from Lois Fitch, whose 2013 critical guide has set the benchmark on Ferneyhough scholarship. (i can’t comment on the quality of the John Wall pre-concert talk, as it was given by myself.) But beyond this were a number of round table discussions exploring both the specifics of the pieces as well as the more general sociopolitical context of contemporary music-making. Discussions of this kind, confronting its extrinsic and intrinsic challenges, are a vital part of engaging substantially with new music, and it’s a testament to Alba New Music’s raw ambition that they were such a significant and integral part of this year’s festival. It’s still early days for Alba New Music, but on the strength of this and last year’s festivals, one can only hope that the seeds planted these last two years can grow into something ever larger. Contemporary music – composers, performers and audiences – would benefit from this enormously.