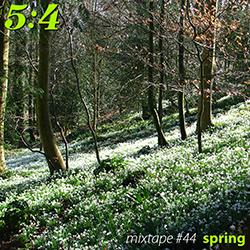 For my April mixtape, i’ve gone for a seasonal theme, exploring music that references and/or alludes to aspects of spring. While all the seasons are, by their nature, in a continual state of flux, i’ve personally always tended to think of spring and autumn as being ‘transitional’, more obviously progressing between opposite poles of light and warmth. Therefore, i’ve opted for a quite polarised collection of music, some of which can be heard from a cheerful, upbeat, thank-god-it’s-not-winter-anymore angle (Syd Dale, Barbara Morgenstern, John Zorn, The Bad Plus, Deerhoof, Veljo Tormis, Henry Mancini, C Duncan) while others are more reflective and contemplative (Clint Mansell, Wendy Carlos, Galina Grigorjeva, Kim Cascone, Greg Headley, Andrew Liles, Clara Iannotta, frostbYte, Haruomi Hosono, Shigeru Suzuki & Tatsuro Yamashita, Helen Grime, Keith Berry, Michael Oliva, Shane Carruth, Scott Walker, Paddy Kingsland). Brian Reitzell is something of an odd one out, in full-on sinister mode, while John Oswald‘s madcap overclocked version of the Rite of Spring is one of my favourite sections from his gleefully demented Plunderphonics album.

Starting the mix, and at half-hourly intervals, i’ve indulged my love of birdsong by including some (from the British Library‘s collection) that are particularly appropriate to the season of spring in the UK, beginning with a wheatear followed by a nightingale, a swallow and finally a cuckoo, which brings the 90 minutes of seasonal sonification to an end. The mixtape can be downloaded or streamed below; here’s the tracklisting in full, including links to obtain the music. The cover artwork is a photograph i took in the early spring of 2012, at Painswick Rococo Gardens; those of you who know your flowers will recognise, carpeting the ground, a multitude of snowdrops, a long-established symbol celebrating the season of spring.

Nice! I’d noticed your previous themes of “Autumn” and “Summer” and figured the other seasons would follow. Let’s see… you’ve done “Moon”…

Well you’re sharper than i am – until a few days ago i wasn’t at all sure which theme to go with, and spring wasn’t even one of the options! Clearly i’m now going to have to explore winter at the end of the year :)