This evening’s Prom, titled ‘War and Peace’ and featuring the BBC Proms Youth Choir and the World Orchestra for Peace, gets underway with the world première of a new work called Shadow, by Latvian composer Ēriks Ešenvalds. In preparation for that, here are his answers to my pre-première questions, along with the programme note for his piece. Many thanks to Ēriks for his responses.

I am influenced by the glories of the natural world, and I often write about it. The largest works I have written recently are Multimedia Symphonies: the first called Nordic Light, about the Northern Lights, and the second about volcanoes. I have travelled across the world to collect and film folk stories about the Northern Lights (Greenland, Alaska, Iceland, etc,) and about volcanoes (Hawaii, New Zealand) for these projects. When writing a new piece I always start with the text; a good story is often what I am looking for. I was a singer (a tenor) before becoming a full-time composer, so I instinctively understand vocal phrasing, voice leading, breathing, and what the voice can do. I live in Latvia, a country obsessed (in a good way) with singing.

In 1988 when I was 11 years old, a budding Latvian composer, I heard my first first true muse. I was singing at school and playing the piano; that’s when I heard Whitney Houston. I just loved her songs. At that time (during the Soviet occupation) we couldn’t get the sheet music for her songs. We saw her on TV and heard her through cassette tapes. I learned her songs by listening to her.
Houston’s songs surprised, intrigued and inspired the me on my own musical journey. I certainly should say (a posthumous) thank you to her for being such an inspiration in my musical career. The natural flow of harmonies in her songs attracted me very deeply.

I studied at the Latvian Music Academy with Prof. Selga Mence; she was the first of the two greatest teachers I have had. Step by step, smartly she led me through all compositional techniques, styles etc. During my studies I also attended some 15 masterclasses in Europe having Jonathan Harvey, Philippe Manoury, Klaus Huber, Richard Danielpour, Guy Reibel, David Lang and Ole Lützow-Holm among my teachers there; and then, at a masterclass in the Czech Republic, I met Michael Finnissy and he became my second greatest teacher! In his music – which witnessed to the composer’s incredibly wide-range imagination, the scores often being of very complex textures – the emotional story was present all the time! That was so fascinating, and humble, and smart!

The story or basic idea of the new piece, a poem, for example, has to come first. Therefore I read a lot and I go to a library – in Cambridge, or Tromsø University Library in Norway, or Bemidji University Library in Minnesota – wherever in the world I land to give a masterclass or to lead a rehearsal or to attend a premiere. I am thirsty for the shelves of the books which take me to far horizons. Even having been a composition teacher myself at the Latvian Music Academy for some seven years now, I keep studying. So, when the story has been found, I start to compose at my piano with pencil and blank music-paper. I am a good pianist, and polishing the harmony and polyphony is faster at the piano. When approximately 70% of the music has been sketched, I turn to my computer and finish the score there using the Finale notation program.

My latest works are:

This said, I am the father to our four children and, to be honest, together with my wife every morning we both are their drivers to take our kids to the train station, and then bring them back in the afternoon; and rarely they depart or arrive together. So I am very happy to be active, and that keeps my mind in a constant motion moving from one genre to another; it would be much less inspiring if I were to compose choral work after choral work, or chamber instrumental pieces one after another.

Shadow is a very demanding piece in terms of legato and phrasing, intonation, diction and polyphony, because the poem was very powerful and dramatic, and it spoke to me deeply.

People are smart and educated, and I wouldn’t dare to narrow their horizons with my few suggestions. But if I may, try several of my different works: the deeply philosophical Frontiers of Time for string orchestra, Passion & Resurrection (Carolyn Sampson, Polyphony, Britten Sinfonia and Stephen Layton), Legend of the Walled-in Woman (Latvian Radio Choir and Sigvards Kļava), a choral song Only in Sleep (Trinity College Choir Cambridge), Lakes Awake at Dawn, my most performed song worldwide Stars (Voces8), Magnificat and Nunc dimittis (Merton College Service), The First Tears (Portland State Chamber Choir and Ethan Sperry), my Nordic Light and Volcano symphonies (State Choir Latvija and both Latvian National Symphony orchestras), my two operas or the piano solo piece The Frozen Horizon.

I can only generate ideas and compose while being alone; therefore, after this Prom concert I will go to Cambridge University Library, spending a few days there to search for certain materials for my new ballet, which probably will take some two years because of my research and creating it. Then comes a film score, after which I will compose music to accompany a 15-minute great show of lights and fireworks on 18 November in Riga, to celebrate Latvia’s centenary. 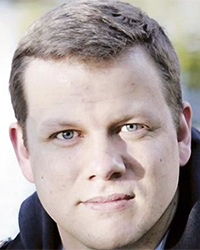 A Shadow, the poem by American writer Henry Wadsworth Longfellow (1807-1882), speaks about the unchanging intergenerational worry of parents and grandparents towards their children and grandchildren when it comes to war and suffering. Longfellow lived through the American Civil War. His son was wounded fighting in the Union army, and afterwards Longfellow became a leading advocate for reconciliation. But he knew the Nation’s wounds would need time to heal beyond his generation’s lifetime, and his poem offers a simple yet magical encouragement to the young:

… the world is very old,
And generations pass, as they have passed,
A troop of shadows moving with the sun;
Thousands of times has the old tale been told;
The world belongs to those who come the last,
They will find hope and strength as we have done.

It seems fitting that the premiere should be given by the Proms Youth Choir, the next generation. My setting includes moments of dramatic and exclamatory questioning, of flowing passages denoting the enjoyment in life, and softer moments of calm contemplation, and it uses the crystal-like sound of metallophones played by some of the singers to represent the unchanging flow of time.