Tonight’s Prom includes a short orchestral work by US composer Andrew Norman, titled Spiral. Here are his answers to my pre-première questions, together with the programme note for the piece. Many thanks to Andrew for his responses.

Such a tough question!! I write music that is often about the process (or struggle) of making something. I think the best ideas in my pieces are trying to form themselves in real time, they are trying to become something as they go. I don’t like to present material so much as unleash it in an unformed state and watch it find its true self. I love the idea that a piece of music can be like tracing a thought through a brain. Sometimes that thought’s journey is focused and sustained, and other times it is filled with non-sequiturs, wrong turns, and crazy tangents. A lot of my music explores the rhetoric of juxtaposition, jump cuts, and fragmentation. Ideas are chopped into little pieces and made to jostle around with each other, constantly reframing and intercutting each other.  I tend toward timbres that are on the rough and raw end of the spectrum, and I especially love using these sounds not as a replacement for traditionally beautiful sounds, but as a foil, or an expansion, of them. My music is often highly kinetic, and it relies heavily on the physicality, the visual theatre, of instrumental playing for its full effect. I really believe in live instrumental performance, and there are aspects to many of my pieces which can’t be gleaned from a recording (my apologies to the radio audience!).

I’ve been a performer since I was a child, and I played in orchestra all throughout school. Writing music felt like a natural extension of my activities as a musician when I was younger. As I’ve gotten older, writing has definitely gotten harder, and a lot less natural-feeling, but I keep at it in hopes that someday I will stumble onto something of which I can be proud.

I studied at the University of Southern California and at Yale. I’ve had some amazing teachers, including Donald Crockett, Stephen Hartke, Aaron Kernis and Martin Bresnick.

Starting a new piece is always dreadful for me. I feel lost for a really long time. I feel like I’ve forgotten how to write music, and that I may never be able to do it again. Sometimes in this lost state I sketch random fragments of musical ideas. Sometimes I improvise on the viola and the piano, usually thinking about a particular physical gesture as a starting point. I work in a really non-linear, fragmented, aimless way for a long time. Usually what happens is that at a certain point, months and months later, something falls into place, some small connection between sounds or ideas, that allows me to begin to make sense and shape of what I’m doing. More connections become clear, and at the last possible moment (or just past it) everything – the sounds, the forms, the conceits – falls into some semblance of place and I have a piece. And then after the first performance, when I know more about what I’ve done, I go back and rewrite everything.

Spiral explores some themes that I return to often in my work: organic growth, gradual accretion, the slow formation of a musical thought through repetition, the compression and expansion of time, the relationship of physical gesture to expression in string playing, and the spatialization of sound within a traditional orchestra. Spiral is what I like to call a one-idea piece. Like the third movement of Play or the last movement The Companion Guide to Rome, it really is about the gradual formation of one single thing. I was trying to capture the sense of watching something slowly come into, and then perhaps move past, focus. Or perhaps it is the idea of zooming out on a fractal, or of regarding one’s receding selves in a multi-sided mirror chamber. As with a lot of my work, Escher-esque geometries are not too far buried beneath the surface. Practically speaking, Spiral exists because I was asked by Simon Rattle to write a five-minute orchestral piece for one of his last concerts as music director of the Berlin Philharmonic. I knew I wanted to create a single big shape with my five minutes of Philharmonic time, and Spiral is the result.

There are nice recordings of my pieces Play, Switch, and The Companion Guide to Rome available commercially. But I am always a little reticent to recommend my recordings – not because the players and the performances aren’t spectacular and compelling (they are), but more because I make music for live performance, and a recording for me is only an artifact, a documentation, of a particular experience, and not the experience itself. Go see it live!

I’m very late on a big piece for the Los Angeles Philharmonic, and on a cello concerto for Johannes Moser. 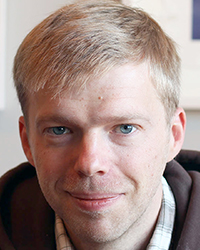 Commissioned by the Berlin Philharmonic to be part of Simon Rattle’s final season with that orchestra, Spiral is a short piece that traces the transformations of a small number of instrumental gestures as they orbit each other in ever-contracting circles.
—Andrew Norman