Tomorrow morning’s Prom concert, given by the European Union Youth Orchestra, includes the first UK performance of Fireworks, a recent work by Polish composer Agata Zubel. In anticipation of that, here are her answers to some of my pre-première questions (i’ve provided some information in lieu of answers for the final three questions), together with her programme note for the piece. Thanks to Agata for her responses.

I cannot say that I have a regular method of composing music. For each of my works separately, I look for its proper sound aura. Sometimes the music directly follows the word in a vocal work; at other times in the case of purely instrumental works – I myself determine the musical form. In some pieces, it only reflects the atmosphere or some hidden meanings. Every composition follows its own rules.

For as long as I can remember, music – which I view as the most abstract of arts – has played a very special role in my life. Despite the lack of musical traditions in my family home, I became totally absorbed by music at an early age. I began my music education by playing percussion instruments, and this sound world – both of definite and indefinite pitches – had a strong impact on the development of my musical imagination. From the very start, it included all kinds of noise sounds, performance art, and phenomena commonly considered as merely paramusical.

It was for a percussion ensemble that I wrote one of my first compositions, which won the first prize in a competition. This was both pleasantly surprising and inspiring. From that moment on – that is, from the end of primary school – I began to learn composition with the highly regarded teacher from Wrocław, Prof. Jan Wichrowski. I then became his student at the Academy, and later his assistant. I completed my composition studies in 2002 at the Academy of Music in Wrocław. I also took up vocal studies with Prof. Danuta Paziuk-Zipser at the same Academy, graduating in 2005. In the meantime, after serving as assistant lecturer at the Chair of Composition and Music Theory in my alma mater, in 2004 I obtained a doctoral degree and in 2014 post-doctorate in musical arts.

With each new composition I start, so to speak, from scratch, without applying ready-made recipes. For me, the most important element is invariably the same – exploration. My works are very often inspired by words; my vocal and vocal-instrumental works are frequently rooted in literature. I am particularly fascinated by the writings of Samuel Beckett, to whose texts I have written three compositions: Cascando, Not I and What is the Word. I am also very fond of Polish authors: I have set texts by such poets and writers as Wisława Szymborska (The Labyrinth, Birthday), Czesław Miłosz (Aphorisms on Miłosz, A Song about the End of the World), Natasza Goerke (Stories), Tadeusz Dąbrowski (In Between the Ebb of Thoughts and the Flow of Sleep).

[Fireworks was commissioned by the Adam Mickiewicz Institute, and was composed to mark the 100th anniversary of Polish independence.]

[i’d recommend Znikad Historie (Stories Nowhere From), an album of rather wonderful songs for voice and electronics created with Cezary Duchnowski, and also NOT I, an anthology of four of Zubel’s ensemble and electroacoustic works on the Wergo label.]

[Bildbeschreibung, a new opera for two voices, instrumental ensemble and electronics, is being performed at the Transart Festival in Bolzano on 6 September, then a new work for ensemble will be premièred at the Donaueschinger Musiktage in October.] 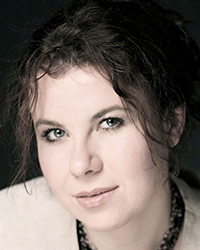 History sometimes presents itself as a perfidious cobweb of events, made up of evolving sequences of causes and results, which lose track of their own logic in the naïve hope that the imperfect human memory will fail to notice the inconsistencies. A look back at a hundred years of the nation’s traditions, successes and challenges, of culture, its contexts and thoughts, and eventually – of music itself (!) – could well result in an endless gallery of observations and associations. It can also produce, however, a vision of our here-and-now, of the present seen as the fruit of everything that happened before. I do not usurp the right to sum up the past or to warn people with my music. All I want to do is exclaim, “I am happy to be alive and free, here and now!”

The noisy interventions of the brass and the intrusive percussion are therefore not to be taken as memories or as echoes of inspirations, but rather as so many flashes of musical thought. And if you sense a lyrical streak in my music – do not associate it with a nostalgic patriotism or with some painful residues of Romanticism. The music of someone who lives in the present – in a country that regained its freedom a whole hundred years ago – can also carry a humanist message, with all its naturalness and its affections. Though the awareness of this music’s culture of origin is a relevant one, the artist’s self-identification need not be a necessary condition for, or the sole key to, the possible meanings that can be ascribed to the sounds. My intention has been for Fireworks to lend the listeners strength and inspire them to action, to focus their enthusiasm, rather than provoking a debate about what anyone’s actual or postulated identity. I want my music to trigger a rapid and unpredictable stream of thoughts that will meander through the multiplicity of impressions, will be able to surprise and energise, and inspire the audience with the sheer joy of life!