It’s impossible to be aware of everything that’s going on in new music. For me, that fact is usually associated with new CD releases, but i’ve come to realise it’s just as true for concerts and festivals. Apropos: Forum Wallis, a five-day festival of contemporary music that takes place annually in the Swiss mountains. i suspect i’m not the only person on whose radar Forum Wallis has never properly registered, but having recently returned from my first experience of the festival, it clearly deserves to be not only more widely-known but loudly celebrated, and take its place among the annual round of new music festivals that, if at all possible, are not to be missed. 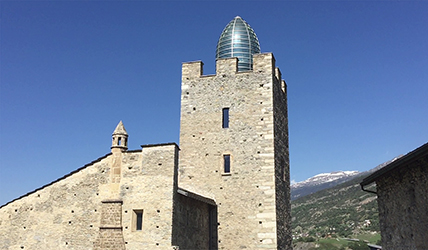 Quite apart from its musical objectives, you could hardly ask for a more stunning location to experience new music. Forum Wallis takes place in the small town of Leuk, situated in the south-west of Switzerland on the banks of the river Rhône, surrounded on each side of the valley by soaring Alpine peaks. Having begun in 2006, the festival has evolved under the leadership of composer-performer Javier Hagen such that its focus is divided between instrumental and electronic music, both of which are explored in the old-meets-new architectural space that is Schloss Leuk, the town’s wonderfully restored castle.

The electronic side of Forum Wallis is primarily concerned with Ars Electronica, the festival’s annual call for acousmatic works. Free to enter and with no age restrictions, this year’s call resulted in around 400 entries from over 50 countries, which were whittled down by a jury (comprising four members, located around the globe) to a shortlist of works, six of which were featured during the festival, with an additional nine listed as ‘highly commended’. These six pieces were heard over the course of three concerts, book-ended by well-established works by senior figures of electronic music. Before getting into the music, i need to say something about the way in which they were presented. Devised and engineered by Simone Conforti, the speaker arrangement owed a clear debt to the practices of BEAST, but the most telling thing about the setup was the restraint with which it was used. One of my pet hates in the world of electronic music is the (mis)use of the word ‘immersion’, arrogating it as something objectively delivered to the listener, when in practice the term is entirely subjective, something that may or may not be experienced by each individual. As such, immersion – contrary to the contexts in which one usually encounters this word – has nothing whatsoever to do with quantity (or, indeed, quality) of speakers, and everything to do with the much more simple marriage of the qualities of the music itself heard through a sound system that is as transparent as possible. i don’t actually remember how many speakers were used at Forum Wallis – maybe a dozen or so – but while no such claims to immersion were made, for me the most incredible thing about each concert was how deeply immersive it was, despite Conforti’s obvious avoidance of trying to flood Schloss Leuk with sound, favouring a more subtle and nuanced approach, allowing the sound to emerge and fill the space much more naturally. Of course, at times it was extremely present (a more suitable word in this context than ‘loud’) – but at its most quiet, our ears became incredibly sharpened to the tiniest of sounds lurking at the cusp of audibility. This was electronic music without makeup, if you will, that we could ingest without feeling force-fed; and while not every piece deserved such brilliant lucidity, i doubt any of them had ever sounded better. 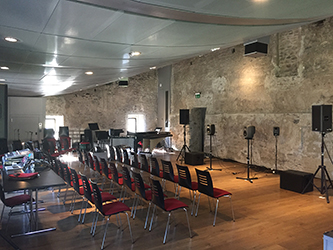 The decision to place the new electronic works in the midst of classics by the likes of Bernard Parmegiani, Francis Dhomont and Trevor Wishart was a good one, though it acted as a double-edged sword: while it provided contextualisation, it also set the bar pretty high, giving the new works a lot to live up to. Listening again to Dhomont’s Phonurgie (1998), Wishart’s Imago (2002) and especially to Parmegiani’s De natura sonorum (1975; we heard three movements: Incidences / battements, Étude élastique and Conjugaison du timbre), it was impossible not to marvel at both their imaginative scope and technical skill. In the case of Dhomont, as usual i found it hard to stay focused on the work’s longer-term shape and direction due to the sheer beauty of its sounds, whereas in the Wishart the irrepressible nature of its free-wheeling impacts more than ever sounded like it was desperately trying to break out into a eruption of funk-driven dance moves (in the process making Jonty Harrison‘s Unsound Objects (1995), also heard in these concerts, sound remarkably staid and dated). The Parmegiani was perhaps the most audaciously effortless wielding of electronic materials heard throughout these three concerts, its quietly intense wrangling of sounds simultaneously beguiling and baffling at how such a piece could have come into being. Of these ‘senior’ works, though, i was most wowed by a rare opportunity to hear John Chowning‘s four-channel version of his 1981 Phoné; its lyrical nature – the music practically ‘singing’ a lot of the time – was surprisingly moving while remaining elusive, like trying to make out the details of a mass of motes dancing in a bright shaft of light. But its latter half was even more striking, taking a turn for the abstract, immersing us in a deeply meditative soundworld that today we might characterise as ‘ambient’.

The six Ars Electronica winners made for an interesting cross-section of approaches to contemporary electronic music. Personally, i could have lived without hearing the failed attempts at quirky humour in JP Lempke‘s This is not a drill or the exercise in re-hashing hackneyed ideas that was James Andean‘s Valdrada, both works of only passing interest that became irritating due to their obvious attempts to grab our attention. By contrast, in Robert McClure‘s Lingering Garden softly-colliding sustained pitches mingled with assorted field recordings – often very low in the mix, blurring their tangibility – such that the piece radiated a pale kind of beauty that felt enchanting and tender. Tempus fugit by Paolo Pastorino particularly lived up to the second half of its name, featuring material seemingly in a permanent state of fleeing; it was all exquisitely just-intangible, ‘droplets’ of sound coalescing just long enough to form a briefly coherent sonic object before vanishing in that same instant, as if evaporating into gas, steam or wind. Emma Margetson‘s Distorted Illusions arranged what sounded like multiple strata, the behaviour of which was both individual and unique yet complementary to all the others. Though it was arguably the most elusive of all the electronic works, its slow-moving, occasionally punctuated material was no less mesmerising for its almost defiant sense of distance. Most outstanding of all at these concerts was Joao Pedro Oliveira‘s La Mer Émeraude, a work that took me a while before i realised i wasn’t remotely hearing it as composed sound but with the plausibility of an ‘abstract field recording’, some kind of highly sophisticated, convoluted alien phenomenon that Oliveira had miraculously captured with stunning fidelity. Often highly delicate, there were episodes where it became palpably robust, though never aggressive or violent. It would perhaps be best to describe it, on both the small- and large-scale, as ‘impactful’, and at both ends of the spectrum it was genuinely spectacular, a work that left one wondering in wonderment at what we had just experienced. 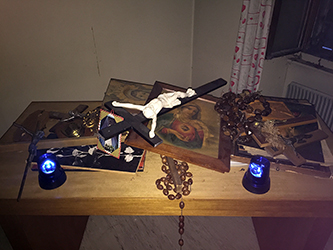 This feeling extended to several events at Forum Wallis that were either centred upon improvisation or unconventional approaches to music-making. The most discombobulating were the two 45-minute experiences that were a cross between an installation, performance art and a concert, designed to open “the composition process to public spaces”. Conceived and performed by Javier Hagen, recorder player Ulrike Mayer-Spohn and Simone Conforti, and taking place in Leuk’s large, derelict Burgerspittel (where two nuns dual-handedly cared for the old and infirm for many years), this involved the bringing together of reworked excerpts of existing compositions popping up quasi-randomly at various points throughout the building, which was filled with a huge array of equally quasi-random objects. 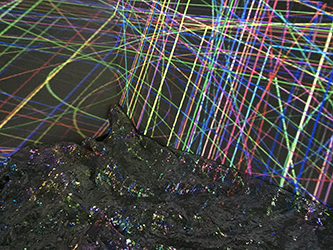 This paraphernalia ranged from strategically-positioned lights that enhanced parts of the building itself – which was somewhat creepy, particularly in the late evening when this was taking place – to disarming sights such as a large collection of crucifixes, a desk illuminated from the inside and topped with a candelabra, a room filled with low-resolution computer graphics spilling across a crumpled foil sheet, and various musical gadgets the output of which could be embellished by manipulating various children’s toys (which were rigged to interact with the electronics). In roughly equal parts fascinating, inscrutable and absurd, it would be uncharitable to call it pretentious as the whole thing was clearly designed as a holistic sound and light encounter in which inner connections or meanings (if any) were entirely one’s own. 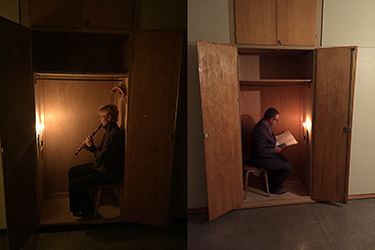 The performed excerpts were all taken from works composed for Hagen and Mayer-Spohn (who have been active as a duo – UMS ’n JIP – since 2007), two of which in particular were breathtakingly memorable. A section from ar by Swiss-Armenian composer Varoujan Cheterian featured Hagen and Mayer-Spohn sitting in cupboards on either side of a connecting wall. Being in separate rooms, it wasn’t at first obvious that a duet was taking place, but when the penny dropped it was if the wall between them became immaterial, the duo’s soft dialogue – flitting to and from a unison F, like an embellished drone – intimately focused and poignant. At the opposite pole of behaviour, a burst of Pollaple Roes by Mehmet Ali Uzunselvi, the duo now at either end of a small room, was a dazzling demonstration of closely-coordinated chaos, so fiery in its raw emotional charge that the air seemed to crackle around them. These performances – and the others too, plus the way the duo wove them together in their movements through the space – prevented the Burgerspittel experience from being merely a superficial sequence of weird tableaux, grounding it in disorienting but thoroughly human interaction.