This evening, the 2019 Proms festival begins in earnest. As on many previous occasions, they’ve opted to get things started with a world première, which this year is by Canadian-born, US-based composer and sound artist Zosha Di Castri. As an upbeat to that, here are her answers to my pre-première questions together with the programme note for her piece, Long Is the Journey, Short Is the Memory, which will be given its first performance by the BBC Singers and BBC Symphony Chorus with the BBC Symphony Orchestra conducted by Karina Canellakis. Many thanks to Zosha for her responses.

My music is eclectic, but tends to focus on detailed textures with a sensitivity toward timbre and creative orchestration. At times I incorporate moments of lyricism and rhythmic drive, and I do not shy away from occasional repetition, as I see it as being integral to the way our memory processes form. Often my music plays with the juxtaposition of highly contrasting material. I usually work from a larger idea that informs my compositional decisions – such as a concept, a text, a narrative, or a response to a piece of visual art or literary source. Though my music can be challenging in its many-layered composition, I also strive for it to have a visceral or emotional impact even upon the first listening. I am also interested in interdisciplinary and collaborative pieces, though the BBC piece is more straight-ahead concert music.

I studied piano from a young age and was quickly drawn towards improvising. Though I had little formal instruction in theory as a kid, I eventually found my way towards composition. Three important musical moments for me in my childhood were: 1) seeing/hearing a living female composer at the Banff Center for the Arts when I was about 12 or 13 (I had never previously realized this was even a possibility for women), 2) studying piano with Michael Massey, the pianist for the Edmonton Symphony Orchestra. Both he and his wife were professional musicians and their house was a kind of shrine to music (their cats, who were potty-trained, were named Daphne and Chloe…to give you an idea). It made a big impression on me that one could dedicate one’s life to this sort of thing, and I have many fond memories of long, inspiring lessons; and 3) being chosen to work with Alan Gilliland, the then-composer in residence at the Edmonton Symphony Orchestra in my last year of high-school. Alan gave me my first lessons in composition and orchestration, and I had the amazing experience of hearing my first piece played by the orchestra. This definitely motivated me to pursue further studies in composition. Becoming a composer was for me more of a gradual realisation than a lightning-bolt sign from god. It never felt like something that was forced on me… just an insistent pull that kept drawing me further.

I did my undergraduate studies in piano performance and composition at McGill University in Montreal, Canada. I then studied in France, before returning to North America for my doctorate in composition at Columbia University in New York. My most important influences have been Brian Cherney, various spectral composers like Gérard Grisey, Tristan Murail, Claude Vivier, and Kaija Saariaho. I also have great admiration for Olga Neuwirth and Unsuk Chin’s music. Older influences include Debussy, Stravinsky, and Bartok. Though my work has been informed by these diverse styles, I have increasingly embraced other elements including more lyrical/melodic passages, pulsed-based rhythms, improvised music, and folk-like qualities. I don’t see what I’m doing as being divorced from music of the past, but rather linked to many traditions (both old and new), with my own personal spin.

When I start a piece, I usually have a vague abstract idea of what I would like to do. Often I begin with a collection of words, harmonies, sometimes drawings of gestures, and then I sketch out a rough formal plan for the piece. These global formal diagrams serve as a general roadmap, but I do permit myself significant detours as I write.

After this initial mapping, I begin to work not from a score but from a digital mockup using Logic Pro to test out ideas in a flexible manner. I like working this way because: 1) I can get closer to the sound and hear what I’m doing very concretely, 2) I am able to achieve a greater sensitivity towards timing, and 3) I can experiment with form and the layering of ideas, while also thinking about rhythm more freely.

I rarely compose in chronological order therefore this platform is more suited to my way of writing than composing directly to notation software or to paper. I usually create kernels of material (maybe 15s long), and gradually move, rearrange, and develop these organically as I go, cross-pollinating ideas across the entirety of a work. I use both commercial sound banks (like Spitfire Audio) as well as banks I’ve made myself over the years with musicians I’ve collaborated with.

This piece is emblematic of some of my recent orchestral writing, though this is the first time I have written for chorus, so it may tend more towards the lyrical than some of my other work. Like I’ve done before, it interweaves multiple sources of text, borrowing from both ancient and more recent sources, including a text by Sappho, fragments of Leopardi, and new text written by my friend Xiaolu Guo. Since the Proms asked me to connect this piece to the anniversary of the first person landing on the Moon (given that the premiere aligns almost fifty years to the day of this historic event), the direction of the piece was highly dictated by this initial prompt.

For orchestral music, I would suggest listening to Lineage or Dear Life. For chamber music: Cortège, La forma dello spazio, or my string quartet. For the vocally inclined, I have a piece for six voices and electronics called The Animal After Whom Other Animals Are Named. In the Fall, I will be releasing a debut album of my music on New Focus Recordings featuring seven pieces of mine, including a music video made in Paris of a solo percussion piece with Diego Espinosa Cruz Gonzalez.

After this past year in Paris, I am moving back to New York. Next, I will be working on a Koussevitzsky commission from the Library of Congress. This piece is for 5 musicians from the International Contemporary Ensemble and conducting percussionist, Steve Schick (the European premiere will be given by Ensemble Itinéraire in Paris 2020). I also have a commission for the Grossman Ensemble as a part of a composer residency through the Chicago Center for Contemporary Composition. In addition, I plan to re-work the hour-long music theatre piece I co-wrote with David Adamcyk, entitled Phonobellow, with the goal of presenting it in a gallery setting – serving as both a stationary sound-installation, and a kinetic, multidisciplinary performance. 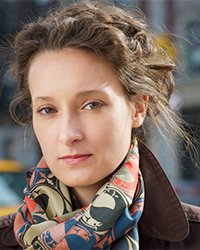 Long Is the Journey, Short Is the Memory – programme note

Long Is the Journey, Short Is the Memory commemorates the anniversary of the first person landing on the Moon. This piece interweaves three sources of text, exploring how humans have looked to the Moon across time and cultures, including segments of Giacomo Leopardi’s Italian poem Alla Luna (1820), ancient Greek lyric poetry, sung here in English, attributed to Sappho (though there is some debate regarding its authorship; ca. 570 BC), and new text by the Chinese-British writer Xiaolu Guo. Guo’s contributions reference Apollo 11, the legend of Chang’e, and the recent Chinese Chang’e-4 exploration of the far side of the Moon.

Part of this last mission included an amazing experiment to grow plants in a sealed self-sustaining biosphere. Shoots of a cotton plant sprouted, marking the first living matter to ever be grown on the Moon. Even though they failed to survive the harsh lunar night (which lasts approximately two Earth weeks, and reaches temperatures well below -100 degrees Celsius), the experiment proved the project could potentially be feasible.

Drawing on these multiple sources, the piece opens with an evocative chord and shimmering metallic percussion, accompanied by Leopardi’s text, ‘Oh graceful moon, I remember’. This chord reoccurs periodically throughout the work as an important formal marker. The music then takes a more somber turn, focusing on the garden’s struggle for survival, building to a wild explosion of densely textured, riotous rhythmic activity.

Twice in the piece, the Sappho fragment emerges, featuring a punchy plucked bass line accompanied by ascending clarinet glissandos and a modal canon in the oboes (a microtonal version of the ancient Greek Mixolydian mode).

Near the middle of the work, we enter a very different acoustic space over a low drone. While the sopranos sing an expansive melody referencing the first steps on the Moon, the rest of the choir and orchestra create a soundscape of whispers, air, and slowly descending lines; it is as if time itself is suspended.

In a nebulous return to a darker atmosphere, the choir sings of Chang’e, a beautiful woman who drank an elixir of immortality, causing her to fly toward the heavens and settle on the Moon. Interestingly, the legend of Chang’e was also mentioned in a conversation between Houston and the Apollo 11 crew just before the first Moon landing in 1969, and China’s most recent lunar probe takes its name from this same goddess. After a burst of florid activity and a powerful bassoon and brass chorale, the final portion of the piece unites its many strands: the legend of Chang’e, the Moon garden, Apollo, and Leopardi’s nostalgic contemplation.

Despite our first epic journey to the Moon and back, there has been a noticeable lag in enthusiasm for further exploration since the late ‘60s (until perhaps just recently). This piece is thus an invitation to become fascinated once more with the satellite orbiting our home, that has so consumed the human imagination filling us with awe, longing, beauty, and illumination.