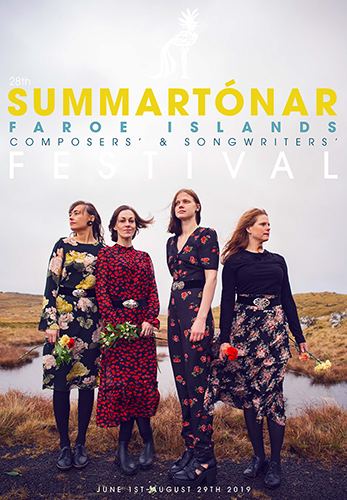 When did you last listen to music from the Faroe Islands? Who’s your favourite Faroese composer or group? For many, i suspect, those questions would likely be impossible to answer, and until recently – with the big exception of Eivør, one of my very favourite singers – i would have been in the same position. That is, until a few weeks ago, when i took up an invitation to spend some time at Summartónar, the Faroe Islands’ annual music festival.

To say that Summartónar is different from most music festivals is not simply an understatement but a reflection of the broader fact that pretty much everything in the Faroe Islands is, to some degree, different from everywhere else. Its location, a remote spot in the North Atlantic between Iceland and Norway; its composition, a cluster of 18 principal islands (all but one inhabited) none of which is longer than around 30 miles, rising vertiginously from sea level to form austere, alien hill ranges; its language, rooted in Old Norse and today resembling a curious mash-up of Icelandic and Danish. Though clearly related and connected to a wider community, it’s nonetheless a place that feels uncannily dislocated.

Nothing in the Faroes is ordinary, and unsurprisingly this extends to its cultural life too. Even before i’d experienced anything first hand i’d heard how, due to its relatively small population (around 51,000), musicians there tend not to fit into neat generic or stylistic categories but instead take part in a wide variety of musical forms, encompassing and combining folk, jazz, classical, pop and the avant-garde. Such a pluralistic outlook as this can be seen in the make-up of Summartónar itself. Its events, most of which gravitate around the capital city of Tórshavn, generally fall into one of three broad descriptors: folk / singer-songwriter, jazz / world, and classical / experimental; beyond these are cultural evenings (about which more in a moment) and concerts taking place out of doors and in caves. Despite its remoteness and relatively small size, there’s clearly a wealth of music-making going on in the Faroes, which perhaps explains why the Summartónar festival lasts for no less than three full months (June to August). 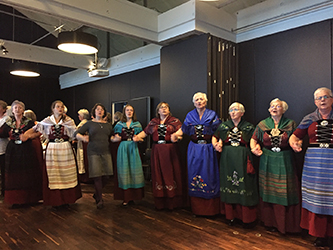 The six days i spent there gave a good indication of this rich diversity. In hindsight, it was instructive to spend my first evening there at one of the weekly cultural evenings that take place high up on the mountainside at Hotel Føroyar, which on a good day must surely command incredible views over Tórshavn and out to sea, but on this occasion looked out onto an impenetrable wall of fog. What we experienced inside was a lot more than just a tourist-oriented display of historical custom. Unlike most western folk practices, the Faroes’ traditional music evolved without instruments, thriving into a form of singing and dancing known as the chain dance. The chain is formed by the participants linking hands in a closed (and, on this occasion, very large) circle, and to a relatively simple series of steps – two left, stop, one right – the verses of one of the islands’ lengthy ballads (Kvæði) are sung. i took part in one of these dances, and as well as being enormous fun it turned out to be surprisingly complicated: the melody was ostensibly simple (essentially just an elaborate up and down scale in F minor) but rhythmically and metrically irregular, out of step (literally) with the number of movements our feet were making. This, combined with trying not to bang into people or step on their feet as we moved around the space made for an arduous but hilarious experience. Just as impressive was the memory of the participants; even though we experienced a heavily edited version of the ballad (which apparently runs to a huge number of verses), everybody seemed to know the complete text by heart. This was no mere re-enactment of an old and tired custom, but a vibrant, meaningful, living and breathing tradition still held extremely dear to the country’s inhabitants. The evening was rounded off with a dramatic tale about selkies and the malevolent treatment they suffered at the hands of marauding visitors to the islands, and a meal of local delicacies that, once you’d overcome some initial shock and awe – it’s not every day you’re presented with slices of whale meat, giant cubes of blubber and boiled sheep heads – turned out to be delicious.

The remainder of my time at Summartónar was generally more conventional. Both in terms of performers and repertoire, the outlook of the festival was focused on the Faroes’ immediate Nordic vicinity, primarily from Iceland and Norway. Unusually, and disappointingly, there was almost no music by Faroese composers. The one exception to this – and he’s about as notable an exception as it’s possible to be – was Kristian Blak. It’s not really hyperbole to say that, within the Faroes, Blak is tantamount to a legend. Originally from Denmark, he came to the Faroes in the 1970s and has remained ever since. He set up and continues to run the wonderful Tutl record label, which almost single-handedly showcases the incredible amount of music being made throughout the Islands, he founded and leads the ensemble Yggdrasil, and he is the artistic director of the Summartónar festival. In Faroese music-making, he’s a quintessential figure. 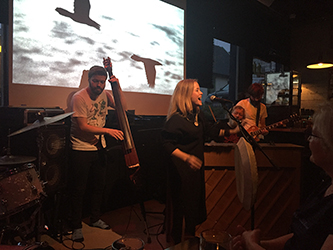 Blak’s music took centre stage on several occasions. Ravnating (‘parliament of ravens’) is a multimedia work dating from 1982, conceived in collaboration with photographer Philippe Carré. Images of ravens by Carré inspire the various movements of the work, and are projected throughout the piece. For the Summartónar performance, which took place in a small bar named Blábar, Blak had revised the work to incorporate Vera Kondrateva, a folk vocalist from Siberia who was in essence an artist in residence during the time i was there. In many ways, Ravnating is a perfect example of the non-compartmentalised musical thinking i alluded to before. Overall its soundworld most closely resembled a prog rock concept album, infused with elements of psychedelia and krautrock, yet jazz, free improvisation and folk music all played significant roles in the work. It made for a deeply complex amalgam that, somehow, managed to sound stylistically unified while remaining aesthetically multifaceted. At no point did it feel noodling, uncertain or self-indulgent; in tandem with Carré’s gorgeously evocative monochrome images, we were immersed in a landscape that, for all its conceptual design, sounded personal and emotionally-charged, with Kondrateva – whose voice had the stunning intensity of a laser beam – demonstrating how elegant and expressive it was possible to be on, of all things, a jew’s harp. 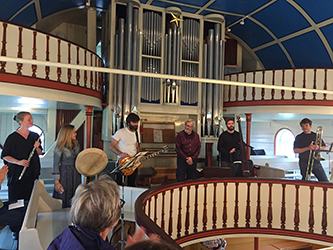 The conceptual nature of Ravnating was mirrored in another work of Blak’s, Yggdrasil, performed by many of the same players (flute, trombone, voice, bass, guitar and organ) at a mid-morning concert in the balcony of Tórshavn’s exquisitely miniature cathedral. Also dating from the 1980s (composed in 1987), Yggdrasil is structured in four movements inspired by elements from Norse mythology pertaining to the titular mythical tree. The first acts as a scene-setting prologue, while the second, ‘Niðhøgg’, evokes the serpent said to gnaw at the roots of the tree. This is followed by a process of healing in ‘Norn’, and finally ‘Ratatosk’, an upbeat conclusion referencing the squirrel that ran up and down the tree delivering messages between the serpent and the eagle sitting at its highest point. Blak used this narrative arc as a framework for another piece that blurred generic boundaries. Relaxed solemnity was its default position, reinforced through use of the cathedral’s organ, sustained chords beneath a slowly-unfolding octave-doubled melody. Even something as ostensibly simple as this managed to seamlessly blend idiomatic traits from prog rock, folk and classical chamber music. The destruction was enacted in big solos from flute and trombone, buoyed up by a serious increase in energy from the rest of the ensemble, thereafter leading into a pulseless sequence of gentleness, free-flowing fragments of line floating over a deep drone. The finale injected jazz into the mix, underpinned by an outbreak of wild bassline beneath a back-and-forth between trombone and flute. Its dramatic shape could hardly have been more straightforward, but (as in Ravnating) the stylistically chimeric nature of the music made Yggdrasil much more than a mere fusion, deeply unconventional yet completely recognisable in its elements. As such, it seemed simultaneously fresh yet as if it were resounding from an unknowable, ancient past.