This morning’s Prom concert, given by the National Youth Orchestra of the USA, features the first European performance of Occidentalis by one of the orchestra’s Apprentice Composers, Benjamin Beckman. To provide some background and context, here are his answers to my pre-première questions, along with the programme note for the piece. Many thanks to Ben for his responses.

I am still constantly exploring. Each new piece finds me a technique or a form of expression that I love and adopt into later work, alongside a whole line of elements I felt didn’t resonate as well. But for an overarching description, lyricism is something very important to me and my music. I have a sense of rhythm that is interested in energy and either atemporality or drive. I enjoy grooving, I enjoy climaxes. Gesture is something I’m constantly thinking about. Most of all, I always try to write the music that I want to listen to.

I remember when I was very young, I would get very bored of practising piano and turn to improvisation, with the hopes that my parents wouldn’t notice it wasn’t any longer Mozart being played, but bad rip-off Mozart. At some point I began attempting to write down my improvisations – our family has home video of me playing my first piece for my father when I was around seven. I had a light bulb moment when I was 13 that everything I’d written before then was indeed bad rip-off music, and went off on my own way. Composition has always been a part of my musical endeavours for as long as I can remember. As time passed, I simply began to fall in love with it more and more, and at this point I can’t imagine doing anything else career-wise.

The majority of my study in composition has been under the auspices of the Los Angeles Philharmonic’s Nancy and Barry Sanders Composer Fellowship Program, with Andrew Norman and Sarah Gibson. It’s a highly valuable opportunity for secondary school-aged composers to learn alongside each other in a small group setting, and to have work read and performed by professional musicians. I’ve also had very transformative summer experiences at the Boston University Tanglewood Institute’s composition program, and most summers of my childhood surrounded by music – whether writing it, playing piano, or horn in orchestra – at the Interlochen Center for the Arts. I will begin studies at Yale University in the fall, double majoring in Music and Classical Languages.

In terms of influence, I feel inspired by the music of John Adams and David Lang, the ‘Americana’ of Barber and Copland, Renaissance choral music, Takemitsu, Messiaen, vocal jazz, and indie rock, among many others.

Every piece of mine is a blank slate. I like to think of each work from the get-go as being uniquely specific to the person or group I am writing for and the circumstances of the planned performances. The concept of my piece in the Proms, Occidentalis, is a direct response to NYO-USA’s European tour (my programme note below elaborates significantly on that).

Occidentalis was written this spring from February to mid-May, around the same time I was working on my first chamber opera, The Basement Among the Stars (scored for three voices and piano). I feel like the piece became an embodiment of things that are difficult to do when writing for voice. The opera has a lot of quiet, intimate moments and long, expansive lines. When I wanted to get away from that music, Occidentalis was my place to write music that at its core contains a sense of either large, static mass or brilliant energy and vibrancy. Upward-striving lyricism and wild percussion writing have been two features of my music in the past year that I feel I’ve executed to a large degree in this piece.

My piano quartet Three Views, string quartet light pours through the quiet interstices and we measure this transient world, and orchestral piece ascendance, descendance have all had excellent recordings that are available on my website, www.benjaminbeckmanmusic.com.

A big life change – my move to New Haven! I’m very excited about diving into the new music scene at university next year. I intend to expand and orchestrate the above-mentioned chamber opera for a self-produced performance at Yale. I’m also currently working on a set of pieces for horn and piano with plans to produce an album with Scott Sanders, an incredible horn player and member of NYO-USA. 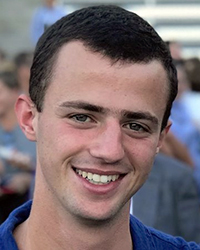 When invited to compose a piece for the National Youth Orchestra’s 2019 summer tour to Europe, I sought inspiration from the group’s mission to serve as an artistic ambassador of goodwill from the USA. With this work, I wanted to somehow capture through music a part of what it means to be American, without being cliché or overgeneralising.

I began my thinking very simply: America is west of Europe. The term ‘occidentalis’ itself was used on old European nautical maps to indicate the westward direction. The idea of that direction historically carries a lot of significance in the US: ‘going west’ to find land and start a new life on the frontier was the defining element of human migration in the Americas throughout the seventeenth, eighteenth, and nineteenth centuries. Through the use of Latin in the title, I’m also hoping to convey the antiquity, primacy and universality of this desire, for the constant pursuit of a better life is simply built into our collective psyche.

The United States is primarily a nation of immigrants. We are, as a country, innately defined by this promise of a better life elsewhere. This idea is not extinct today: the human right to pursue freedom and prosperity is all too relevant in today’s political climate, as not only honest concerns about border security but also xenophobia seem ever-present in voting patterns and the popular voice. More personally, many immigrants, including my own ancestors, sailed west to America fleeing poverty and religious persecution, seeking better lives for themselves and their children. Further, I am about to leave home for university – my own personal journey of starting anew elsewhere. In this sense, Occidentalis is about the many dual-faceted emotions behind leaving one place to find something better in another: a deep uncertainty and anxiety in what the future may hold, but also excitement and the joy of possibility.