As COVID-19 gradually succeeds in bringing the entire globe to a depressing standstill, it seems as good a time as any for my Lent Series to look at some large-scale works that, from one perspective, could be said to be doing exactly the same. i’m usually very good at remembering first contact with music that makes a deep impression on me, but for the life of me i can’t recall how i first encountered the work of James Whitehead, aka JLIAT. i know it was a very long time ago, at least 15 years, and my hunch is that it was via his sequence of long-form drone pieces that constitute the earliest portion of his exceptionally eclectic output. Those last few words are vital: while drones have a place of significance, Whitehead’s musical outlook is one of the most radically and refreshingly questioning that i’ve ever come across, probing hard into the limits of how and what we define as music and even sound, particularly with regard to the way it’s represented, reproduced and reconstituted in the digital domain. To that end, his work is just as concerned, if not more so, with drone’s polar opposite, the ostensible chaos of noise, and beyond this it’s fair to regard more than a little of his work as conceptual in nature, as much about a sonic idea than a sonic artefact, though in all cases that artefact is always worth spending time with. Furthermore, while there’s a fair bit of whimsy in the JLIAT back catalogue, i’m always impressed at how deeply serious and considered it all is; it may be fun, but it’s never frivolous. 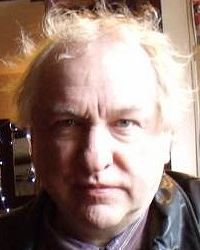 The main body of his drone works date from the 1990s, some of which were released on CD, including 16.05.94 (1994), The Dancing Horse (1995) and The Ocean of Being (1996). Numerous works from that period were not released publicly, until a few years ago when Whitehead made them available as downloads on his website. Among these are four one-hour pieces titled after a single letter: J, S, A and E, the last of which is in two half-hour parts (presumably the letters come from Whitehead’s first name, though there’s apparently no piece titled M). J and S date from 1992, A and E from the following year; all of them were made primarily using a Yamaha SY99 and a Korg Wavestation, and were created in real time, recorded directly to tape. These pieces therefore predate Whitehead’s earliest CD release, and can perhaps be regarded as prototypes of 16.05.94, which has a lot in common with them. To my mind, though, they’re among the most interesting of the JLIAT drone works, as much for the subtle distinctions between them as for what they individually do (or don’t do).

All four take the pitch F as the fundamental for their respective drones, and their collective behaviour involves the (inter)play of other notes in relation to this pitch. That’s all that ‘happens’ in these pieces, which is why i said before, from one perspective, it’s possible to regard the music as not really ‘doing’ anything. Yet as with all of the most interesting works of this ilk, every single moment they are in a process of transformation, tilting the emphasis of their component pitches, adjusting the intensity of them both individually and as a whole. It’s not unlike staring at a fixed point on the surface of a lake and watching the light dance atop its ripples.

In J there’s a minor harmonic emphasis, the hovering triad bringing to mind the melancholic (G minor) opening of Pink Floyd’s ‘Shine On You Crazy Diamond‘. In addition to its constantly-changing inner details – which, in all four pieces, quickly become hypnotic – the surface gently undulates due to an ongoing series of small-size swells. Though irregular, these swells are subject to a slow and essentially imperceptible regularity, cycling in 10-minute episodes (this is only really apparent when looking at its waveform). In S the harmonic emphasis is major, with an added 2nd (G) and 6th (D), lending the drone an inviting warmth and (though it lacks its melodic elements) bringing to mind the hazy, balmy atmosphere of Brian Eno’s ‘Discreet Music’. The swells in S are both more significant – powerful surges in relation to otherwise gentle stability – and unpredictable; though never more than five minutes apart they lack any regular periodicity.

The harmonic implications in A and E are different, in both cases avoiding hints of major or minor in favour of something more neutral and elusive. In A, in addition to the drone Whitehead emphasises the 2nd and perfect 4th (B-flat). They pull in different directions, the 2nd seeming to reinforce the F – acting as a kind of supertonic, wanting to fall back down – the 4th doing the opposite, tugging away from it. Coloured by a soft flanging throughout, the result is a beautiful equilibrium, the forces holding each other in check, while at the same time allowing numerous occasions when the music appears to have temporarily tilted over in favour of B-flat. Dynamically, A is more smooth and serene – almost glossy – than J and S, the swells a continual part of its gently rippling surface, none of them causing a significant change in its demeanour.

Of these four works, the two parts of E are by far the most dramatic, the music halting (or, at least, taking a momentary breather) from time to time and featuring the widest dynamic range. E is even more harmonically neutral; occasionally there are the barest, briefest, tiniest hints of a minor 3rd (A-flat) but they’re gone as soon as they’re glimpsed, making one genuinely wonder whether they actually happened or were simply an aural illusion. The octave and perfect 5th (C) predominate, coloured here and there with additional overtones that, like the minor third, are similarly brief and ephemeral, becoming a lovely dusting of glitter during its most epic swells. As with J, there’s a largely imperceptible cyclic repetition going on at roughly 7½-minute intervals. Why E is divided in two is hard to say – the parts are not merely siblings but identical twins (part 2, ‘E’, is a little quieter than part 1, ‘e’) – so to all intents and purposes it’s essentially another one-hour piece.

i love being held by the different forms of equilibria exhibited in these four pieces. Our attention is forever pulled back and forth between their ostensible immobility and persistent states of harmonic re-emphasis and change. It wouldn’t be unreasonable to use J, S, A and E as a background (or ‘tint’) for a listening space, but personally i find it impossible not to become mesmerised by their ever-varying details. Perhaps something of what these four pieces are, or aspire to be, can be found in the magnificently grandiloquent titles Whitehead gave to two of his later drone works, released at the end of the decade: A Long Drone-Like Piece Of Music Made With Synthesizers, Samplers And Digital Delays Which Attempts In Its Minimalism To Be A Thing In Itself Without External Reference, Having An Analogue In Certain States Of Consciousness Where Being Is Experienced Also As A Thing In Itself And Not Contingent On Meaning Or Purpose (1999) and When We Focus On Nothing As Opposed To The Set Or Subset Of Infinite Events With Whatever Intellect We Have In That Moment The Conscious State Becomes Aware Of The Alternative To The Infinity Of States Which In Its Apprehension Is Enlightenment (2000).

Hitherto, the downloads of these four marvellous pieces were low quality lossy MP3s available from the JLIAT website drones page. However, i’m delighted to say that Whitehead has sent me the original lossless files and given me permission to share them, so for the first time ever J, S, A and E can finally be heard in their original, pristine, full resolution glory. They deserve absolutely nothing less.

Beyond drones, as i stated at the outset there’s a huge amount of diverse JLIAT material to explore, much of it also available online to peruse and/or download. Don’t be put off by the somewhat disarming website design, but do be prepared for a discombobulating and provocative yet ultimately enlightening experience as you move further and further down the JLIAT rabbit hole. When you re-emerge, don’t be surprised if the whole way you think about music and sound has been permanently changed.