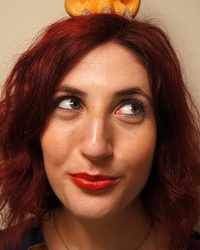 At the moment, stuck in the lockdown with no foreseeable end, i’m experiencing (like, i imagine, many people) good days and bad days – the former when my mind is focused and energised, the latter when it feels flat and enervated. It’s a situation that’s made a chamber work i heard last October take on a richer meaning. Together, alone by Yfat Soul Zisso is a piece that very obviously channels disquiet, discomfort and pain, drawing on the sensation of feeling isolated even when surrounded by others. It’s a sense of dislocation and separation that i recognise myself, one that has taken on extra dimensions in the current climate when the word “social” can hardly be uttered without being followed by “distance”.

The piece has a Skempton-like simplicity – by which i mean it’s deceptive, not actually simple at all. That being said, Zisso’s music is also very clear and immediate. Initially, we hear an F-sharp minor chord sequence; it’s stable, yet at the same time it’s obviously fragile, sounding desperately elegiac. Over time that stability is revealed to be, depending on your perspective, either precarious or downright non-existent. Two unities come undone: the players no longer operate as a group, by turns breaking off independently, in the process thinning out the chords and questioning the group’s actions; and the harmonic integrity of those chords is made oblique by an increasing intrusion of microtones. The result is a blurred semblance of something identifiable, like trying to see clearly through eyes filled with tears. There’s an implied frustration underpinning and/or arising from this, made plain in the agonising sequence of repeated chords that ends the piece, hammer blows that just feel completely numb.

Last year when i first encountered Together, alone, during Illuminate’s second season of concerts, i found it genuinely heartbreaking. Now, to be honest, i find it almost too much to take – but as in all music articulating profound melancholy and pain, there’s a paradoxical action that arises from it. It reminds us that the sadness we may feel is shared by others, and regardless whether we can empathise, we can certainly sympathise, the piece inviting a sense of compassion, a sharing in another’s suffering. Perhaps, particularly at the moment, in addition to expressing the sentiment captured in its perfect title, it also expresses something of those words reversed: alone, Together.

This performance of Together, alone was given by the Illuminate String Quartet in Huddersfield last November.