The latest addition to the Outside-In compilation of field recordings is one of my own. i’m sure i’m not alone in noticing how much more prominent birdsong has become during the lockdown, which is really wonderful. i’ve been fascinated by birdsong for many, many years, and lots of my field recordings focus on birds in some way.

This recording was made almost ten years ago, on 23 May 2010, during a gorgeously hot, sunny day spent exploring the National Nature Reserve at Bridgwater Bay in south-west England, which looks out across the River Severn towards Wales. The shoreline itself was characterised by just two birds, skylarks on the beach and reed warblers in the marshes and reed beds, but moving just slightly further away from the beach yielded an amazing increase in bird numbers. The tip of the reserve is on the Steart Peninsula, and i was curious to see how far its small, single-track road could go before reaching the water. It turned out that the road abruptly stopped next to a house appropriately named At the Very End of the Road. 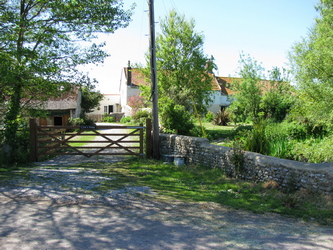 The recording was made along the track from the house, outside the adjacent Cox’s Farm. My recorder (on this occasion, a Sony PCM-D50) was placed on a wall surrounding a pond at the edge of the farm. The sounds captured in the recording come from the pond itself (mainly ducks), the farmstead behind (including a prominent occasional cockerel) as well as a variety of birds sitting on telegraph wires that run directly over the pond. In addition to all these local sounds, there’s also the regular crashing of the sea from the beach, around 300 metres away. i really like the sense of depth that i managed to capture in this recording, but above all i just love how deeply immersive it is, with the sounds of nature flooding in from all directions. My one regret: i wish the recording was longer; i only stopped because a large group of walkers turned up (clearly in no hurry to move on – and who can blame them?), otherwise i suspect i could have just sat there listening all afternoon.

If you’d like to experience a much longer bird-focused recording, check out my Dawn Chorus podcast, the recording of which was made the very next morning.

All of the recordings featured in Outside-In are available to download or stream; there’s no charge for downloading, but you’re free to make a payment if you wish, and all proceeds made will be shared among the contributors. If you’d like to contribute a recording of your own, see the Call for Recordings information below.

If you have a recording you would like to be considered for Outside-In, the guidelines are very simple:

Please note: the idea is that the recordings were made before the lockdown, but if you would like to make one that reflects the current, quieter state of the world – without breaking any local rules on going outside in the process! – then that’s absolutely fine.

To send your recording, please use the 5:4 Contact form and in the “Your Message” section please include the following: