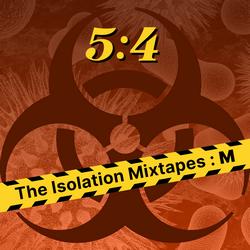 It’s week 13 in my series of Isolation Mixtapes, which means we’re now halfway through the alphabet. When i began this series it seemed possible that the prospect of 26 mixtapes, unfolding weekly over the course of six months, might well be in keeping with the length of time of lockdown. As things stand now the lockdown, and its associated isolation, is slowly becoming less of a reality in the UK – and even more so across Europe – though ‘normality’ (however we end up (re)defining that) remains somewhere in the future, particularly for music and the arts. So my plan is to continue through the latter half of the alphabet in the hope that, by the time we reach Z, all of our lives might be a lot more genuinely normalised, and that enforced isolation is becoming a memory.

To that end, here’s this week’s mixtape, devoted to composers, groups and artists beginning with the letter M. The first half has an inadvertent focus on song, while the second half becomes more abstract and atmospheric. As always there are two tracks for each of the years 2010 to 2019, presented in chronological order.

Here’s the tracklisting in full, together with approximate timings and links to obtain the music.