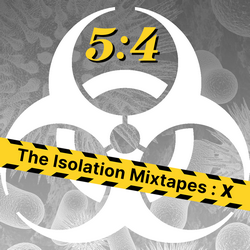 This week’s Isolation Mixtape was the most difficult letter of the alphabet to work with. My usual plan of featuring two fabulous tracks from the last decade initially proved impossible regardless whether i was focusing on the artist or the track beginning with that letter, which i suspect says more about X than it does the paucity of my music collection. i’ve therefore thrown the net a little wider, to include any artists, groups or composers whose name includes the letter X. Even that was something of a challenge but it did turn out to be possible, so once again there are two tracks from each of the years 2010 to 2019, featured in chronological order. i’ve actually allowed myself one extra from 2019, simply because i wanted to end the mixtape with the two final tracks that bring xin’s album Melts Into Love to its exhilarating conclusion.

Here’s the tracklisting in full, together with approximate timings and links to obtain the music.