In tomorrow evening’s Prom the BBC Philharmonic will be exploring works by Sibelius and Schumann after opening the concert with the world première of Parallel Universes by Swedish composer Britta Byström. In anticipation of that, here are her answers to my pre-première questions, along with the programme note for the piece. Many thanks to Britta for her responses.

I like to think of my music – especially my orchestral music – as something like “sound poems”. I have written a lot of orchestral pieces and developed a style of instrumentation that uses the instruments in a quite special way: a lot of high registers, a lot of reverberation; I often use quite dissonant harmonies, which don’t “feel” very dissonant because of the manner of orchestration. I’m also interested in rhythm and like to have an audible pulse (though sometimes very irregular) in my music.

I was a trumpet player in my early youth, and though I really loved to play and – believe it or not – to practise, I hated to perform; I was terribly nervous before every little concert. I felt the pressure of having to make music “in the moment”, it didn’t suit me at all. I wished to make music in my own way and at my own tempo, to have the opportunity to change again and again until I was satisfied. So, gradually, I gave up the trumpet playing and spent more and more time composing music instead. When I was 18 years old, I began to study composition, and from that point I was determined to be a composer. (I still love the trumpet as an instrument, and still feel a bit nervous when it’s time for a trumpet solo in a concert…)

I studied composition at the Royal College of Music in Stockholm for six years. My main teachers were the Swedish composer Pär Lindgren and the Danish composer Bent Sørensen. They were both excellent teachers and I learned a lot from them: from Pär to use my own musical judgement, and from Bent to use the orchestra in a new way (part of which I have described above). Because of Bent Sørensen, I became interested in Danish contemporary music in general (a tradition very different from that in Sweden!), and I was influenced also by other Danish composers. In my new piece Parallel Universes there are actually traces of this: I have used, in parts, the Danish composer Per Nørgård’s composition technique “the infinity series“. 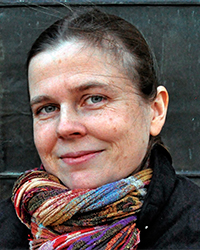 Normally I start with a “blank slate”. I like to have something outside my music, though, to think about as a kind of “mantra” for the piece. It might be a poem, a painting, music of another composer – something to aim at during the composition process, which will help me to stay focused on what I wish to create. In Parallel Universes, it was the theories of Max Tegmark which played this role.

There is one exception from the “blank slate” approach, however, and that is a series of compositions (now more than 20) which I have called “Walks”. They all begin with the same kind of music – a walking pizzicato music – and are based on the idea of walking to another composer’s music, which is quoted in the piece. So there are for example A Walk to Bruckner, A Walk to Schubert, A Walk to Beethoven … I like to do these small pieces as a kind of musical conversation with my old colleagues, and as a way of erasing the difference between new and old music.

I think – and hope! – that this is a quite special piece in my production; it is more playful than usual. The idea of creating simultaneous musical universes affected the music a lot, and made me invent new orchestral solutions. I always love to compose music, but this piece was exceptionally fun to work with!

I received this commission during a very dark period of the pandemic. The situation in Stockholm, where I live, was very difficult. I was at home nearly all the time, and began to feel a bit trapped. At that point, it was a relief for me to take an interest in cosmology, in the infinity of space and the infinite numbers of universes out there.

On Spotify there is my orchestral piece Invisible Cities, which maybe they will like too.

And on YouTube, there is a fine performance of another orchestral piece, Many, Yet One, which I would recommend.

And, if you are curious about the Walk concept, you can find some small “Walks” on Spotify. I would recommend you to start with A Walk to Britten, which is only one minute in length!

I am working on a quartet for four very different instruments: recorder, harpsichord, synthesizer / theremin and kannel (an Estonian string instrument). This piece is actually also inspired by the space, but in a totally different way: I call it Off on a Comet, after a novel by Jules Verne.

Then I hope very much that I shall compose music for a ballet! That is a dream that I have. If you are a choreographer and have the least interest for a collaboration, please contact me!

Parallel Universes is a piece inspired by the Swedish-American cosmologist Max Tegmark’s theories. In Our Mathematical Universe: My Quest for the Ultimate Nature of Reality (2014), Tegmark presents his idea about parallel universes, in which we might encounter exact copies of ourselves… He describes four different levels of ”multiverses”:

To me, this is science that comes close to art! I have tried to transfer Max Tegmark’s theories into music, using compositional and orchestral techniques to create a kind of ”multiverse music”. For example, you can find a lot of canons in the piece, and many musical motifs which up to a certain point are identical, but then start to develop in different directions… You can find different orchestral layers ”rotating” simultaneously, as if in their own solar systems, and behind one layer you find another, and behind that yet another, and so on to infinity. Here I have made use of the the infinity series, a compositional method invented by the Danish composer Per Nørgård. The form of the piece is also due to Tegmark’s model: Parallel Universes consists of four different parts (played without breaks) which are called ”Multiverse Level I-IV”. And who knows – right now in a parallel universe, maybe an exact copy of me have just finished the composing of exactly the same piece…?