Why don’t you just switch off your CD player and listen to something less boring instead? : Onetwo – Instead 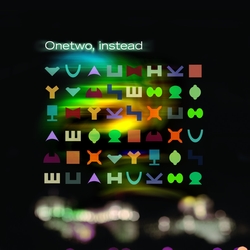 There’s something inherently exciting about the collaboration, particularly when each protagonist has a well-known and established career. The idea of two individually interesting artists producing something new and unexpected together is more than enough to whet the appetite. i’ve been spending time with a comparitively recent example, teaming two names that are somewhat significant from my musical past. Player 1: Claudia Brücken, singer from 80s group Propaganda, whose slightly plummy voice could cut through all the surreal and industrial sounds the other band members could throw at her. Player 2: Paul Humphreys, non-singer from 80s group Orchestral Manoeuvres in the Dark, whose slightly corny melodies became roaringly popular as synthesisers took over mainstream pop. ’Tis an intriguing idea, two such luminaries teaming up, no? So the mind goes into overdrive, predicting what the emergent sound could be like: probably pop songs (OMD), but maybe with a twist in terms of structure (Propaganda); could be either soft and mellow (OMD) or hard and penetrating (Propaganda). Together they call themselves Onetwo, and i was sufficiently intrigued to spend time with their first album, Instead. Now, while i stick to what i said last time, about expectations being best when minimised, it’s difficult when you’re confronting two musicians whose music has meant something to you in the past. Admittedly, i was more of a Human League fan than OMD (possibly they sounded more ‘real’ and gritty, when OMD were all fun and larks – hmm, rather like what i said about The Cure a few days ago; probably it’s the Sheffield connection, which produced some remarkable acts in the late 70s/early 80s), but Propaganda i really, really liked. So hurl your abuse, i had expectations, and reasonably high ones, if i’m honest.

In trying to evaluate what i heard, i’m reminded of a very similar collaboration from – oh my god! – 15 years ago, when Andy McCluskey (the singer from OMD) teamed up with Karl Bartos, one of the original Kraftwerk underlings. The result was Elektrik Music, and i’m sure i wasn’t alone in being profoundly disappointed with the result; the album (Esperanto) didn’t know what it was trying to be, sounding like a collection of influences rather than speaking anything individual. This seems to be the very unfortunate situation with Onetwo as well; Instead is a strange hotch-potch, and the range of other artists that came to mind was an eclectic one. Kraftwerk is present in the album’s best song, “Kein Anschluß”, replete with opening telephone sounds (=”Sex Object”) and vocoder chords (=”Trans Europe Express”), with a quasi-Ralf Hütter delivery thrown in for good measure – it’s a pretty great song, though; “Sequential”, “Cloud Nine” and “A Vision In The Sky” are pure Dubstar, and “Home (Tonight)” reminded me of Leonard Cohen‘s “First We Take Manhatten” (i think Claudia Brücken could tackle his songs pretty convincingly). Perhaps the most striking (but not the best) song is a re-working of Pink Floyd‘s “Have A Cigar”, a surprising choice. i like the idea of this more than its execution; the lyrics need to be recycled at intervals, as their comment on the pop music “machine” is as relevant today as it was in 1977. i don’t have any issue with them turning it into a piece of electronica (genre alert! genre alert!), but the way they perform it is quite strange, with synth chords blaring out to punctuate certain key moments. i think the effect is intended to be exciting, but to me it just sounds odd; nonetheless, Claudia sounds wonderful. The remainder of the songs are just boring; too often, the same short chord progression is repeated ad nauseam, and while “Sequential” is good enough not to be dragged down by this, “The Theory Of Everything (Part 2)” can’t survive it, which is a shame, as it’s potentially a really good song. Throughout, i have to say, the production is superb; through headphones, it’s often a real treat for the ears. It’s just disappointing that there’s little evidence (yet) of an authentic voice.

postscript Propaganda’s best song – and, in my opinion, one of the best songs of all time, with which i spent a huge number of hours during my early teenage years – is “Dr. Mabuse”; few songs can rival that one….