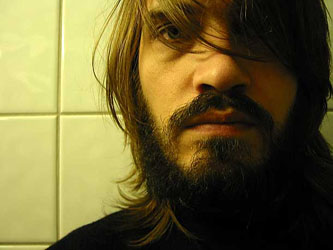 Deathprod – it’s a name both striking and strange, which is appropriate, as his music is both of these things too. There are obvious similarities to Biosphere – both are Norwegian; both explore large soundscapes; both create music that is immediately arresting – and yet there’s something very much more going on in Deathprod’s work. It’s even more dark, more remote, to the point of being mysterious, even ominous or desolate. But i think it’s the remoteness that is the most palpable characteristic of Deathprod’s output, neatly encapsulated in a 4-CD box set, released a few years ago. The set brings together three previously released but now hard-to-find albums – Morals and Dogma, Imaginary Songs from Tristan Da Cunha (remoteness even in the title!) and Treetop Drive – with a disc of new material, titled Reference Frequencies. There’s a fascinating low-fi approach taken in many of the tracks (some were transferred to phonograph cylinders), which somehow sit remarkably well beside more obviously electronic pieces – although, almost nothing on these CDs betrays exactly how it was created, which is quite a feat.

i first discovered his work about 4 years ago, and it still ranks as one of the most exciting, transforming encounters i’ve ever had. The most breathtaking of all is “Treetop Drive 1”, where a wide, orchestral string chord sounds again and again, pregnant and ominous, while slowly-evolving electronics splash and wail, like plangent seabirds over the foghorn of a melancholy ocean. Atop this imagined water, “Towboat” explores the same misty territory with a wider and yet more claustrophobic vision. “Burntwood” sounds like a decrepit audio tape discovered on a beach, filled with sounds that simultaneously beguile and disturb. and then, perhaps the supreme achievement of Deathprod’s sound-world, “Dead People’s Things”, an unbearingly poignant lament for something unutterably lost. All of these pieces reinvent music, expand what it can be, how it can speak. They are among the most rapturously beautiful and sad pieces one will ever hear.