It was at a concert in the spring of 1995 that i first encountered the music of Thomas Adès. The piece was Living Toys, and it was significant to my own development as a composer; i came away from the concert with a new vigour, determination and excitement about the music i wanted to create. Tom and i became mild acquaintances, and i even went to spend an afternoon with him in Cambridge, to discuss my work. While i don’t follow his music as closely as then, i still find it fascinating, and feel he’s one of this country’s more interesting composers. 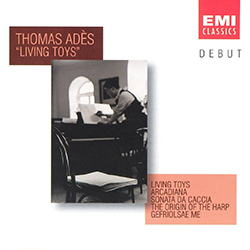 A CD of Living Toys was released in 1998, and tucked quietly onto the end of that disc is a short work for male voices, entitled Gefriolsæ me. The text is an Anglo Saxon rendering of part of a verse from Psalm 51, a psalm that, due to its powerful penitential sentiments, is closely associated with Lent:

Gefriolsæ me of blodum, God hælu mine.
(“Deliver me from bloodguiltiness, O God my saviour.”)

Adès subjects this to the most simple of treatments. Lowest of all: a single organ pedal note, a deep G, which acts as a foundation. Above this, the lowest of the voices – tenors, baritones and basses – oscillate between pairs of notes that gently jar against the pedal, the 5/4 metre lending a ‘limping’ quality to these chords. Finally, above this emerges an alto melody; it meanders in circles for a short time, before splitting into two parts that grow and rise, weaving around each other. The effect of all this is extraordinary, unlike anything i’ve heard before or since; the lower voices groan, the upper voices lament, building in urgency to an imploring climax at “hælu mine”, the pedal note finally shifting down to bottom C. At first, the inscrutable harmonies merely glowed; now they shine, radiating the desperation and the anguish expressed by the Psalmist. It is a piece at the edge of hopelessness, where – as Michael Sadgrove, in his book A Picture of Faith, has put it – “there is nothing left for us to do but to hope”.